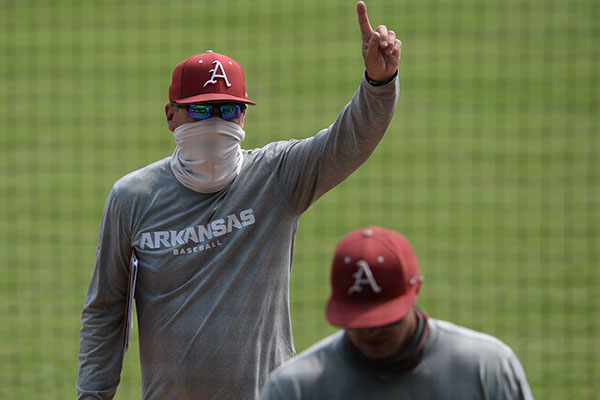 State of the Hogs: Fall ball goes well for Arkansas

Because of a shortened pro draft, impressive depth abounds throughout college baseball. Rosters are big with lots of experienced talent.

And unfortunately, some very good future players will leave a create their own path. I do fear the program is spending a lot of time on quick fix transfers both grad, JUCO and coming soon, one time transfer exception. DVH hinted that time for freshman development in waning when they can go get a transfer.

Most all college teams try the JC route and senior transfers. It’s just the way to get an older players when your 21 year olds are all leaving.

But he’s proven he will play youngsters, too. Look at Robert Moore.

Moore was a done deal and that was starting position guaranteed since he left early from HS. Most colleges don’t do what you said. Majority are HS and developed. Can’t always go transfer to replace 21 year olds all the time and still expect top HS to go. Right now we are in good spot with some decent instate kids but there can be down years.

Most? Do you mean most in the SEC? Or just most?

You make a good point, but I think transfers are always an option for Dave Van Horn.

Dave has consistently brought in a few big-time JC guys. Might be only one a year. And sometimes they might be a weekend starter like Trevor Stephan or a guy at the top of the lineup like Braydon Webb. Or maybe Brady Slavens this season.

What has happened of late in the state of Arkansas is pretty cool. There are good players all over the state.

I was interested in my drive from Norfork through Greenbrier on my route to College Station. I passed what looked like an indoor baseball performance center between Greenbrier and Quitman. It looked pretty extraordinary. You see good players coming out of Greenbrier and I understand why now.

SEC schools by and large don’t have 50+ players on fall rosters. They are taking their young guys and developing. As much as we like to bash LSU and other schools, even the Tigers only have 39 on fall roster. Now, they over recruit and then tell incoming freshmen they don’t have room. Neither way is good in my opinion. If you are a good evaluator of HS players then take time to see them and trust your opinion that they are going to help IF you coach them up. That’s all I’m saying. Arkansas is lucky now because grad transfers want to come and play SEC ball in final year. But that doesn’t make it a strong development system. But they aren’t the only school that will live by the new one time transfer exception, many will and now young players will have options as well