State of the Hogs: Thin can win on mound

Here is a column about pitching for 2021 Hogs: 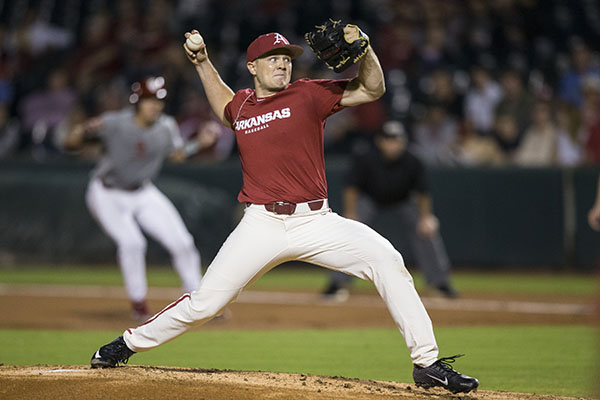 State of the Hogs: Thin can win on the mound

Weight room champions sometimes gain velocity on the pitching mound, but not always.

Great article Clay, so many options for starters, will see how quickly we get it figured out.

Really looking forward to that tournament in Arlington.

Clay, did I read that wrong… this is the best pitching group since DVH got here?

This team is better in that respect (depth and talent) than anything I’ve seen the last decade in Power 5 baseball,” Hobbs said. “We still have to figure out where the pieces fit — weekend starters, closers, setup and the other challenges…

Exciting possibilities,will probably take us a little while to get it all figured out put people in the right spots

Yes, you did twist some of that around to get a different conclusion from “one of the” to the best.

I don’t think I wrote best of the DVH era. I read it again just to make sure. I just said it was one of the deepest and most talented. Best is not be a word that was used. I didn’t even say potential to be best.

This is a group of extremely talented arms. Can they throw strikes? Can they get hitters out? Can they perform in the clutch in both those categories?

I am amazed at times when I see the conclusions after reading a story. It tells me that I did a poor job of writing. Perhaps I needed one more sentence somewhere to hammer home a conclusion, to make it a better commentary. Writing shouldn’t be just about stringing together quotes.

I can recall Dave Jorn’s frustrations with one of the most talented arms from recent years, Ryne Stanek. Jorn told me over and over that the goal was not to win the teddy bear at the county fair with the best reading on the radar gun. Now that’s a fun thing to start out with if you are a pitching coach. But there is more to pitching than talented arm and velo that pops in the mid to high 90s.

Is it the best pitching staff? There is no proof of that yet. They didn’t play an SEC season last year so most of these guys don’t know what an SEC lineup looks like except for fall camp. And, most times, what they saw was a lineup split into two teams, watered down.

What Hobbs said was that he hasn’t seen a power 5 staff with this depth and this much talent in the last 10 years. Does that translate into the best pitching staff since Dave Van Horn became Arkansas coach? I just don’t know how you got that from reading what I wrote.

Is there reason to be optimistic? You bet. As Hobbs said, the challenge is going to be figure out the pieces and fitting the puzzle together.

Just to compare this group to recent pitching staffs that got to the CWS, Hobbs said the coaches ask themselves daily who among this group can be their Matt Cronin. Cronin was arguably the best closer in college baseball for a period of time. If they haven’t answered that in their minds – and they have great candidates – then it can’t be the best of the Dave Van Horn era.

I understand the semantics of what you wrote, and have to admit when the Hobbs’ quote of not seeing a Power 5 staff with this much depth and talent, the “best” for DVH originated in my imagination. That said, Hobbs went far beyond any Arkansas team in “talent and depth” including all of the great pitching teams in the SEC (and beyond) he witnessed for the last decade and coached against. That is one heck of a statement. Certainly the results will be judged on the field and countless issues can arise to limit the success. But, the potential is there to have a great staff, and with this kind of depth, the odds go up considerably. For any coach to give that much credence to a pitching staff before the first game, is a bold and meaningful forecast. At least in my imagination.

When he talks about Power 5 teams, I know that at Wake Forest there was good pitching (North Carolina, Virginia and Florida State come to mind) in the ACC, too.

You asked if you were wrong, I should have just said “yes.”

It does change the dynamics of the story if he’s only making reference to the ACC.

He did not reference any conference. The quote said “power 5” and that’s all he said. I was noting his knowledge is more SEC and ACC. But he’s a California product.

If I misled you, I apologize. Need to be clearer in my writing.

But I’ll stand by my earlier thought, I should have just answered your question, “Yes, you are wrong.” No mention of how this staff compares to the rest of the DVH era was mentioned.

The comparison was in overall depth of talent. The story was clear that there is still not a conclusion on how the pieces will fit together. There is a depth of talent, but to say who can be starters, closers, etc., is still the challenge.

I think you know well that only 16 games were played last season. That staff was talented, too. Many of the same players were youngsters on that team, but didn’t get to pitch much.

As far as pitching, talent and depth abound on this team. Experience in SEC games isn’t there. But you don’t have much experience coming back elsewhere. No one else played many games last year, either. There was a bit of summer baseball last year, but that’s a small sample size, too.

There is nothing that changes the “dynamics” of what I wrote. You took it wrong. Sorry I didn’t do a better job of writing.

Should have another piece on the site later today. It’s done and about ready to go on-line.