State of the Hogs: Still waiting for “the” Pittman quote

Here is a front-page commentary: 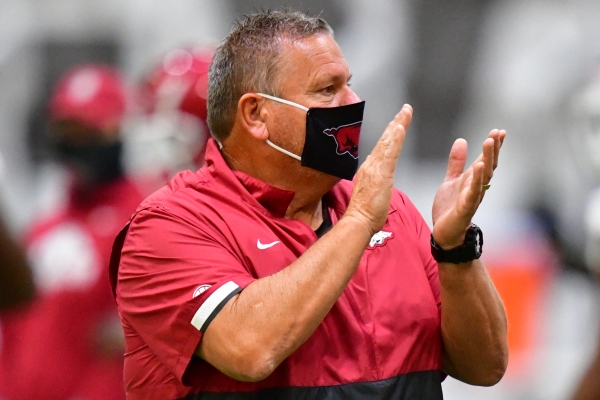 State of the Hogs: Pittman hasn't found his quote yet

Arkansas football fans have seen the good, the bad and the ugly over most of the last two decades, but it’s hard to remember much good. Mostly, they have found not-so-kind names to describe their head coaches or recall haunting quotes.

As always Clay - wonderful…full of memories!

We can all use some good news after the last four years of football at Arkansas and the pandemic of 2020. There is reason for hope as it sounds like professionals are back in charge of things and recruiting is going well, but the schedule is not our friend but it might be if we get off to a good start.

Thanks for the walk down memory lane on the quotes, I remember every one fo them sadly.

I can’t wait to hear CSP say…”that win was a team effort”.

Thanks Clay…on target as always.

Coach Pittman and his go to work approach and wanting to see toughness in the Razorbacks is all I need to hear. From day 1 “ Go TO WORK”!
After watching the last 4 years of just quitting and playing like a bunch of bums that what I want to see. A tough football team

Whatever Pittman’s branding phrase becomes, it will have “strain” in it.

Strain was the word that Matt and I discussed inserting in this column.

Uncommon article Clay. By that I mean good…not the other uncommon we came to experience.

I was having a spirited discussion with my wife. When she asked if I had any better points to add, I said,” I’ve only installed about 5% of my argument.”

She didn’t get it, and it confused her enough that it threw her off her own point. I got a good laugh at my symbolic victory through confusion.

I so enjoyed this - what a trip down memory lane

Pittman’s quote will most definitely include the word “strain.” He said it all the time when he was here the first time and has since he got back. It is his go-to word to describe how he wants his linemen to play.

Clay, I know you qualified your lists by saying it was from the SEC era. But reading the column, I couldn’t help but hear Franks saying “Luck follows speed” in that distinctive Georgia drawl…

For me, so far, the phrase I associate most with Sam is “Arkansas is the best job in America…it really is.”.

I know that doesn’t resonate with the rest of the college football world, but I love hearing him say it. Almost as much as anything, what our program needs right now is someone that truly believes that. And I think Coach Pittman does.

To me, it’s not about being blind to the challenges we face, or how good the others in just our division are. It’s about confidence and true enthusiasm for putting us back where we all know we can and should be. There is NO reason Arkansas can’t be competitive as we were under Nutt and Petrino. I’d be happy with that, and I think after what we’ve been through, most others would be as well.

That doesn’t mean we “are content” to never win a Championship. I think we will. But you walk before you run. Once we get back to that competitive level, we are within striking distance of breaking through. Heck, we very nearly did in 2006.

We can and we will be there again.

Yes, Frank said that, but I do not think that’s what old timers remember most about his initial media conference or what he said the most often. I’ll let others hash this out. Then get back to it.

And you could print an entire book of Holtz sayings. In fact, he did. There are several from Hatfield. And of course I did not cover Crowe. He did not get to an SEC game.

You could pull Frank quotes from the SEC era like “Gus will need a running QB for his offense.” So true.

Yes, Frank said that, but I do not think that’s what old timers remember most about his initial media conference or what he said the most often. I’ll let others hash this out. Then get back to it.

I have no idea what Frank said at his opening media conference. I was too busy on the swingset, or putting my roller skates on at 4 years old. In that era, VERY unlike today, literally no one outside of the Gazettes coverage area even knew he had taken the job. Well…that’s a BIT of an exageration. But there were no “sound bytes” played on TVs (let along computers or phones) an hour after he said whatever he said. Much different time and place.

I relate the “They remember what you do in November” most with Frank, but you had already mentioned that one in your column. The “Luck follows Speed” came from Dan Jenkins’ post-Texas Sports Illustrated story in 1965, I believe. Always stuck with me.

Of course, for Darrell Royal, it was the “3 things can happen when you throw the ball…and 2 of them are bad”.

I didn’t figure you did. First thing he said, “What took you so long?” Also, in reference to an interview the year before, John Barnhill said it would take him a little bit of time to get “the ducks on the pond.” Frank asked, “Barnie, are the ducks on the pond?”

I didn’t figure you did. First thing he said, “What took you so long?” Also, in reference to an interview the year before, John Barnhill said it would take him a little bit of time to get “the ducks on the pond.” Frank asked, “Barnie, are the ducks on the pond?”

Now that you mention it, I did hear Frank recount that - several times, in fact. Didn’t know he said it at his intro presser…I heard him mention it on the Razorback Club circuit many years later.

I was thinking more along the line of a football axiom than a quick quip.

But it was a good line.