Here is a column after we lost Jerry Lamb this week: 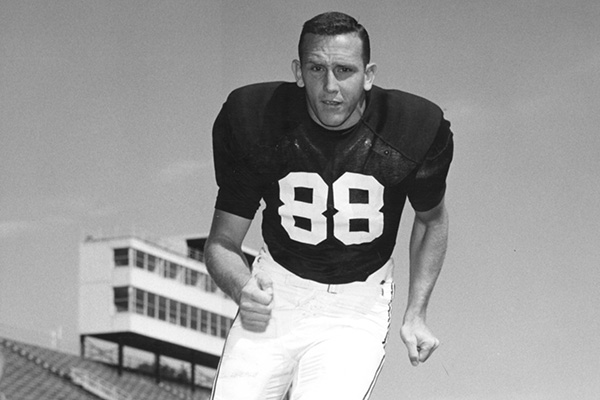 It was early in the summer after my freshman year. I was working a construction job during the week, building a blue jeans plant on the highway to Pine Bluff.

This stirs an old memory and I wonder how true it was. Seems like there was a rumor about Jerry Lamb getting into a scrape with Loyd Phillips? Maybe during the Cotton Bowl time with LSU. And the story went that Jerry won the tussle.

Anybody else remember anything about this?

Clay, your memories of Razorback greats are always a treat. I’m just sorry that they often come when we lose one of those greats.

I agree Marty, Clays stories or his repeat of his Dad’s stories are always a special treat here.
Again, RIP Jerry

Easy to write these stories because there is emotion with someone you loved. Jerry Lamb was easy to love. Treated everyone with class. He was nice to me. I knew very little about giving a golf lesson. Mainly I just went over short game tricks and taught him to play the hole backwards. Gave him stuff my dad and Uncle Bill taught me.

Outstanding article, Clay. I always enjoy reading about Razorback history and the men who made it. A life well-lived. In a time when the term “gentleman” seems to be used less and less, it’s a reminder of what we all should aspire to.

I remember the discussion and heard it from someone who claims to have been there for the scuffle (a fellow player). Per this player, Phillips had Lamb on his back in short order. Not really much of a fight.

I’ll ask Loyd. He will remember if true because it would be one of few times THAT ever happened.

I’ll ask Loyd. He will remember if true because it would be one of few times THAT ever happened.

This…as I remember, Loyd had the reputation of being the guy you DIDN’T want to scrap with. Much respect for Jerry, but would be surprised if he had prevailed in a fight with Phillips.

Not likely it was the Cotton Bowl against LSU (which I attended). Lamb had graduated the year before. Maybe the Cotton Bowl against Nebraska, after the 1964 season, in if in fact this actually happened. Not that it matters. The overarching point is that Jerry Lamb was a great Razorback, and one of my all-time heroes. So is Lloyd Phillips, for that matter.

I think I remember the rumor from back in my high school days that Phillips and Williams (the other DT, and a good one) were the two that tangled. In the dressing room before the game.

Now it’s starting to sound like a contest, a dare, or a bet - who could take Phillips down.
Who’s the next challenger

They say Terry Don could and did. But Loyd won more.

There was one famous tie between Caveness and Loyd in dorm outside chow hall. Coach it was spring time and Broyles had challenged captains to maintain discipline in the dorm when coaches were absent.

Loyd was going through mail packages looking for cookies. Ronnie said to stop. Loyd said make me. So there was a fight. Bruising fight.

They were in a double headlock on the floor pounding on others face when they tired. Ronnie said, let’s rest a minute and think about stopping. Loyd said ok. They remained in headlocks. After a couple minutes, Loyd said, I’ve rested and thought about it and I’m not going to stop. They fought and fought until they were so tired that their teammates could safely pull em apart.

Apparently they were both battered pretty good. All who watched said it was the fight of all fights. Two All Americans in an all-out war. I’ve heard both tell it and it was identical. So I think I have it right.

We need more tough dudes like Ronnie and Lloyd. Football is not a finesse game.

Ronnie Caveness and Lamb were both from Smiley, Texas.

I thought Caveness was from Smiley High in Houston, not the town of Smiley. That’s what Caveness’ Wikipedia page says.

I’m sure a lot of that took place in many locker rooms, dorms, parking lots, etc across the country in that era. That was a time when things were settled that way, then business as usual the next day. No guns, no knives, no weapons - may the best man win and I got your back on game day either way.

Jerry Welch said there was an altercation at Cotton Bowl. Lamb just charged into Phillips. Knocked him flat on his back (or ass, as Welch put it) and it was over. He said as far as fights go, this was not really one. No punches. No holds. Just Lamb knocking Phillips down in a blink of the eye.

That is correct. Smiley the town is closer to San Antonio. They went to Smiley High in Houston.