Here’s a feature on the two returning weekend starters: 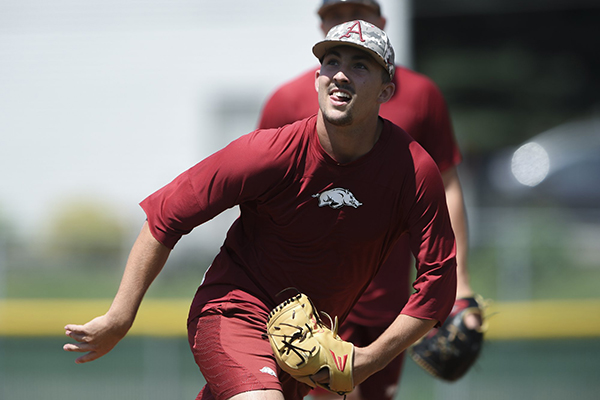 Great Article Clay! glad to see Noland has added a changeup which could be awesome and if he can get it over for strikes could be devastating,would like to see Wicklander command the change too…can’t wait to see how the guys look.

Thanks, Clay. Good stuff! Who do you see getting the early nod for Friday night? With both Nolan and Wiki being lefties, would he break them up or throw them back to back? Who’s the third option. Thanks.

Would like to hear about the bats and hitting coach next.

Nolans is a RHP and Wicklander is a LHP. They are both capable and good but sandwich the LHP between 2 RHP would be my guess. The good news is they both are stronger, have experience in the SEC, they’ve had another year to work their craft and DVH has a lot of options for the 3rd starter on the weekends.
I’m just as excited to See what Bolden can do after his rehab. I’m excited to see Cole Ramage compete.
The back end of the bull pen will be fun to watch and see how it works out as well. I’m just glad it’s almost baseball season again. It will be a fun ride.

Razorback pitchers always seem to get better as time goes on. That’s what I am counting on this year.

Noland is the likely Friday starter, Wicklander on Saturday and I think Kopps (a team captain) probably will get the third start to begin the year. As always, I suspect the rotation changes some throughout the year. Kopps is typically pretty good out of the bullpen, so there is going to be value in him being a reliever if another conference starter emerges.

Caleb Bolden is a pitcher I’m interested to watch progress. He is coming off Tommy John surgery, but I could see him potentially developing into a starter sometime this season. I’ll have more on him a little later today.

If Kopps doesn’t start, he is likely to pitch two or three times during the week. There is big value to that in middle relief. He burns innings. He would like a chance to become a starter. I do think that’s probable. Ramage could get a shot, too. Maybe that’s midweek or on Sunday. Meanwhile, there are some youngsters who might develop in that role, too. Caden Monke would give you a lefty in the rotation, although there is value in bringing lefties out of the pen after a righthand starter. There are more good lefty arms on this staff. Zack Morris appears to be a solid lefty option among the youngsters. He’s 6-3, 215 and looked good in a short outing Saturday.

I really think Freshman Blake Adams will be a mid week starter. They need to get some of the young guys some innings to get them ready for next season.WPS

Blake was pretty good in the fall. We will see how he progresses this spring. One thing to remember, sophomores return next season, too, and there are several good ones on this staff capable of becoming starters. Blake might work himself into the Sunday spot, too. He was one Dave Van Horn mentioned to me that has a chance to be in the rotation and he wasn’t specifically talking about weekend or midweek.

A lot of games are won or lost in middle to late innings. The bull pen crew will be just as important as the starters. Last season I always felt good when the game was handed to the pen in the 7 inning or beyond.
Ramage and Knopps are key pitchers for the team no matter what role they hold.

You must find 8-10 solid pitchers. I’ve seen Van Horn do it with fewer. But it’s tough. I’m talking about when you play five games a week. Van Horn thinks the offense is really good this year, good enough to score runs on Friday night. Lots of things to hammer out but lots of good options on the mound and for the lineup. One thing to remember, they are saying the same things at almost every other SEC school.

That’s exactly right Clay… SEC West is absolutely incredible in baseball! Every team with the exception of Alabama has a chance to be a top-10 team. It is an absolute war of attrition to win the SEC West.The wars that we battle, all they are stressful beyond belief,is what helps us when we get into the regionals,because when we get there,we will have already seen just as good or better. I love the possibility of this team if we can just fill the roles in the pitching that have to be filled I believe we can go to Omaha for sure.