State of the Hogs: Grovey documentary worth your time

When you have passion for something, it’s easy to write about it. I feel the love and the passion for Quinn’s project, Growing Up Grovey. Here you go: 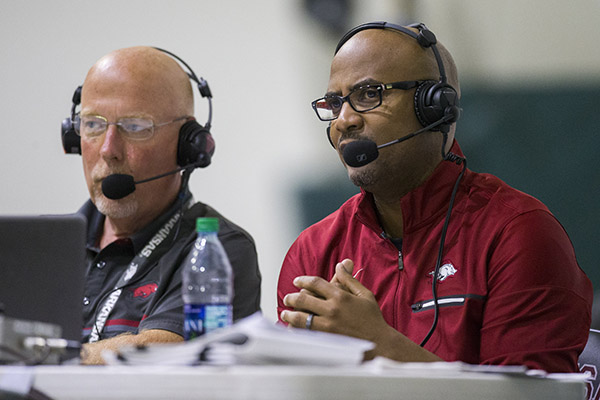 Grovey documentary worth your time

Which Arkansas football players would you put on the program’s Mount Rushmore?

I was a little bummed out at first, because I thought the series was only available to those with a Cox account. I’m glad that it available for the rest of us.

Thanks for this Clay! I plan to watch it tomorrow evening. Mary, who has been cancer free for 14 months now, has another check and scan at Mayo on Monday. Prayers are always tremendously appreciated. We drove to Beaumont to see her 94 year old Dad…have now come to Bull Shoals to see my aunt…spent time in LR seeing my two closest friends, and now head to Rochester, Minnesota. Home to the greatest hospital on earth.

I was my mother’s caregiver for 5 years. COPD. She never lost her razor sharp mind. Which was a huge blessing. But she died at the age of 77…basically just because her lungs gradually just stopped working. She lived with us the last 3 years of her life. Then, after she passed in 2015, Mary was diagnosed with a rare tumor…8 weeks to the day after Mom’s death. Treated at MD Anderson, I of course continued as caregiver…going from my mom to my wife. Now, I will always have some caregiving responsibilities…but that’s ok. I pray every day and use every ounce of positive energy I have to manifest total health for years and years to come for Mary. My hero. She is an astounding person. And she married me. Why, I’ll never know!

But, back to Quinn…my all-time favorite Razorback. He already was. But he really is now. God Bless Quinn and Chuck…and everyone who has had to be or continues to be a caregiver. Which is, of course, all of us in a sense. Because if you love someone…you “give care” to them. And its a privilege. An honor. A sacred journey.

Namaste and God Bless everyone on this board.

Thank you, Clay. You paint pictures with your words. Like your father and regardless of subject, you have the gift.
I was a care giver for 8 years to a parent with dementia. It was the most difficult challenge of my life. Am looking forward to watching Quinn’s story, but also dread the painful memories it will awaken. We must find a cure for this horrific disease.

You are kind. Thank you.

Thanks for the heads up and link to watch. Need this after the week of news our country has been dealing with. It was good to hear Odom yesterday and looking forward to KB today. Monday, football will get focused on the upcoming season in big way so we will know more about team then. Until then this QC story will be time well spent.

God bless you and your wife Hogmaestro!!! Prays up for her!

I am watching Quinn’s second episode tonight – and Ted Lasso.

Thanks Clay. Just plain wonderful. Me and Suzi cared for my mom for several months in our home where she passed of ovarian cancer. Tough. Then a few years later we cared in our home for her mom with full blown Alzheimer’s. There are really no words to describe seeing someone you love dearly go away day by day.

I always liked Quinn. Now I love that guy.

I have great respect for Quinn, Chuck, you (and your family) and the rest who take care of their parents (or grand parents).

Not many know this, but I’ve seen a snapshot of this. I say snapshot, because we could not handle it as a family and that’s all we got.

Not many know the reason why I started at UofA, then moved to UCA.

It had to do with a stroke my mom had six days after I got home for the summer after my freshman year at the UA.

I did not have a car at school. Really didn’t need one. I don’t know why any college freshman needs one, but they all seem to have one now.

My mom drove her Buick Limited 225 to Fayetteville to pick me up. Loaded up my dorm room stuff and we drove home. We did the old 71 to Alma with her driving. When we got to I-40, she got gas and asked me to drive. She had never let me drive her on I-40 in those days. She said she was tired and had been fighting low grade fever for a couple of weeks.

That was on a Saturday. On Monday, our GP admitted my mom to St. Vincent’s to give her an IV drip of antibiotic to fight infection, believed to be in her kidneys.

My mom was in unbelievable shape. She swam daily. She was a competitive diver until she started having babies. But she couldn’t shake whatever infection had been bothering her.

Two days into her stay at St. Vincent’s something horrible happened. Nurses set up the wrong antibiotic for her drip, a penicillin drug that she couldn’t have. It caused an allergic reaction.

My dad walked into her private room at 6:30 a.m. before heading to work and realized she was out. Really out. He yelled for help and the nurses came and realized that her heart had stopped.

It was only for a few minutes probably, but her brain was gone. They revived her and she was comatose for three months on all the machines available in 1973.

We prayed and decided to have the machines turned off. And she came out of it and began to breath on her own, her heart beat was fine. And she came awake.

But she was gone. Blank. Hardly more than a vegetable. We could not understand much of what she said and she clearly didn’t know any of us.

Gradually, she got some motor movement back, but it was violent movement. She had to be restrained and medicated.

Gradually that improved and she was moved by ambulance to our home. We had 24-hour nurse for a few days, but the nurse (and doctors) told us the bad news that she would have to be sent to the state hospital for the kind of care she required (restraints, etc.).

So that’s what happened. That’s where she spent the next 30 years, outliving my father. Eventually, I became her guardian, with that switch coming from my dad after he developed cancer.

There was one more horrific experience. She had cardiac arrest and died, only to be revived again (against the letters we had on file). She was moved to Saline County Hospital. I went to have the machines turned off one more time and she passed.

None of this was publicized. My brothers and I had a private funeral.

The sad part of this is that my mom so dearly wanted to have girls. She had four boys. And, our daughters would have been her grand daughters. She didn’t know Jean Ann, either. I never took the three of them to the state hospital. I just couldn’t take them in to see my mom because of her condition.

One thing that was unbelievable, as I sat with my mom with the ICU nurse at the Saline Hospital and waited for her to expire holding her hand, the nurse got to hear my entire story and that my mom had been bed ridden and often in restraints (because of the convulsive movement of her hands that might scratch her face).

The nurse looked at me and said, “The ladies who have cared for your mom are wonderful. She has not one one scar on her body. Not one sign of ever having a bed sore.”

I hadn’t thought about any of that. They took unbelievable care of her for 30 years.

Of course, I never worried anytime I went to see her because she was in good condition, except for some obvious issues that would not allow her to ever come home.

Fast forward to about five years ago, I went to play in a fund raiser for the state hospital conducted by Jim Mooty, because his son was in the same wing as my mom.

They reached out to me for a hug. One said, “And, you are Mr. Henry because you have your mother’s eyes.” Oh, boy, I lost it. They had been waiting for my group because they had the pairing sheet.

It took me a few holes to hit another golf shot.

I didn’t know any of them by name. But I had always talked to all of the nurses in that wing when I visited my mom. Oh, what special ladies they were. All are retired now.

Of course, the moral to the story is that no one knows the mental anguish we carry as care givers.

One of the things I always enjoyed doing was to walk over to the mantle in our home and pick up the pictures of my mom and tell stories about her to my daughters and Jean Ann. I feel certain they really did know my mom.

I knew some of that Clay, because you shared it with me years ago. I’ve never talked about it. I can well understand how you would lose it when those ladies spoke to you.

We often have no idea what others have gone through, nor how they handled it.

You’re a good man, Clay. Thank you for sharing.

Thanks for sharing, Clay. That had to be tough, and, yes, the people who take care of people with terminal or irreversible or degenerative conditions are heroes.

Thanks for sharing Clay. Brought tears to my eye. What a wonderful son you were to OH and your mom. And you are loved by us on this board.

Wow. Butch had told me a little bit about your mom when I worked for him, but of course a lot of what you described happened after 1979.

As for a freshman with a car, I had to get myself to and from campus. My parents were not going to make the 4-hour drive from Arkadelphia on a regular basis. My first roommate in Yocum Hall didn’t have a car; he took the Greyhound bus to and from Charleston, I decided I didn’t want to do that either. Dad let me have an old Ford LTD station wagon for my freshman year, then bought me a small car (two door, manual transmission, no AC) with the money he’d saved up for my education; my job with the athletic department meant he didn’t have to pay tuition.

My freshman year at William Woods, we were not allowed to have a car. For my sophomore year, I drove my grandmother’s Chevy II. There was no air conditioner, so you opened the vents and lowered the rear windows to allow for air flow. I don’t remember the model year, but this is the color. 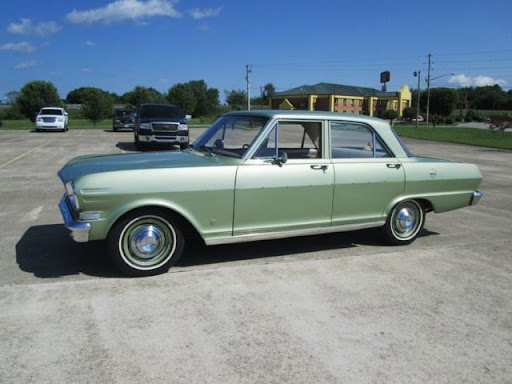 There was no air conditioner, so you opened the vents and lowered the rear windows to allow for air flow

My first car – that I made payments on – was a Chevy Nova Hatchback. Only 2 windows. It did not have air conditioner. After four years I stepped up to a 2-door Chrysler LeBaron. Rich Corinthian leather - with air conditioner. And FM radio. I do not think first car had fm. 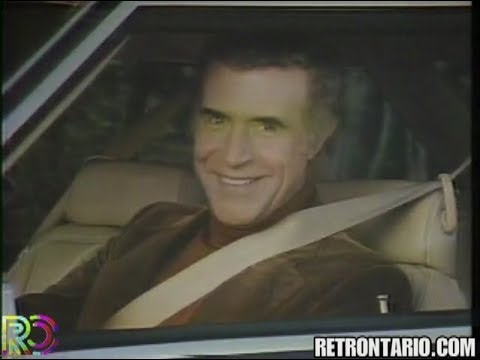 Great commercial. It may have saved Chrysler from doom.