State of the Hogs: Goodheart still provides bop in lineup

Here’s a column on Matt Goodheart: 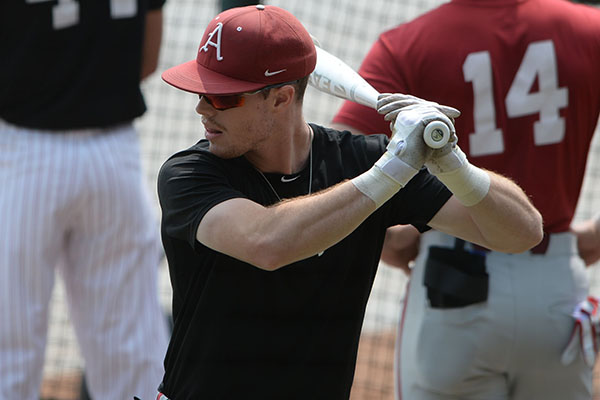 State of the Hogs: Goodheart brings bop high in lineup

Matt Goodheart is the centerpiece of bop that remains in Arkansas' lineup for 2021.

We’re very fortunate he’s returned for the 2021 season. He has a sweet swing. Reminds me a lot of Will Clark.

Will Clark’s swing was as good as any I’ve seen.

I don’t play fantasy baseball any more. I got into it for about three years during my time working nights at the Tulsa World. When you put the paper to bed – and I did that for two summers as training to be sports editor – waiting on the west coast box scores was a big part of the job. The late guy had to get those in the paper.

So I really started studying box scores and numbers as part of the job. Nothing else to do from about 11 p.m. until 1:30 a.m. The sports staff – and it was about 25 guys then – had Rotisserie League Baseball. We call that Fantasy Baseball now.

One of the guys on the desk established the rules. There were trades allowed. That first year (1987) we had a rule that eventually was changed. You could trade multiple players for a star. I traded my top three pitchers for Will Clark. I traded three of my best position guys for Fred McGriff. You could protect two guys into the next season. So my team was built around Clark and McGriff, two players I kept until the league broke up in about 1992 (when I left the paper to start HI).

I won the league three straight years, primarily because of Clark and McGriff.

It was hilarious each morning as my daughters were getting up in September and October those years. They would ask, “How many dingers did the Crime Dog and Will the Thrill get last night?” Funny stuff.

Sarah watched them play with me when the Giants or Braves played on the super stations. She was messing around with softball and was a decent pitcher, but not much of a hitter. She said, “Dad, I guess I just need to swing lefty like Will and Fred.” Those guys were fun to watch – like seeing Heston Kjerstad. Goodheart is pretty sweet with that lefty stroke, too.

I like Heston a lot, but I didn’t think he had a Will Clark-like swing. He’s a true gap to gap power hitter. My view, is his approach to the offspeed is not as good as Goodheart’s.

Being an Atlantan, I saw a lot of the Crime Dog. He could hit the fast ball.

You are right about Heston and Goodheart. Different, but both good hitters. But Heston hit for a good average, too.

Crime Dog would hit the fast ball a long way. That’s the same for Heston. Good comparison. What I see from Goodheart is that he hits curve ball for line drives, too. He can really hit.

Goodheart is very good hitter, stays back on the ball as good you’ll see, have a feeling his power numbers will go up this year

Enjoyable discussion. Clay, great grasp of analytics before it was popularized. It is astounding the number of great college players who never stick in the Majors because they can’t hit that level of pitching talent.
The skill level in the Majors is breath taking.

Hitting the breaking ball and understanding the strike zone will take you a long ways.