State of the Hogs: Get to know Sam Pittman 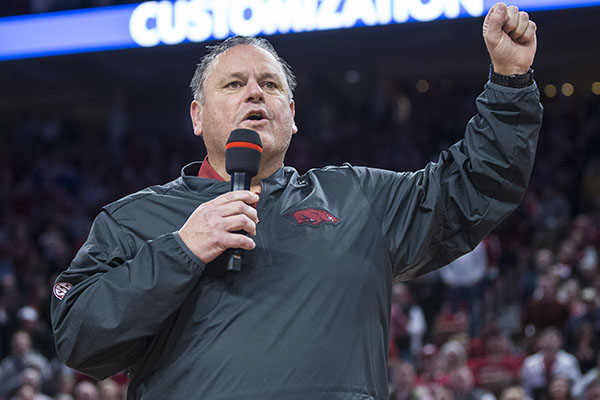 State of the Hogs: Getting to know Sam Pittman

Who knows when it will happen, but Sam Pittman promises to “run through the 'A'” before his first game as Arkansas' head football coach.

He is just solid like a rock. Well grounded in who he is and who he will and won’t be. You can see why his former players rave about him as a man and coach. I think the days of the manic hype and the slack jawed clueless stares on the sidelines are now in our past. I just don’t see any hype or panic or cluelessness in this man at all. I like it.

My kind of person. You have to pull for someone like that. Of course, being for him means being for The Hogs which comes natural for us. I am talking even more than just football. He is the real deal. Can he be a great head coach? That is yet to be learned, but I am not betting against him. At least we now have a coach who knows the importance of an Oline and what it takes to make a good one. I am betting a good Oline goes a long way toward a good football team. We certainly know what a bad Oline gets you!

He shows real down-to-earth honest leadership qualities. I think the players will want to be Fighting Razorbacks again. GHG!

We are blessed to have Sam Pittman for our coach.
Coach Pittman is a man at peace with himself.
Now we just need to defeat this terrible virus.

His former players and coaches tell that story.

I’m very hopeful he will turn the program around. Let’s give him plenty of time.

I had two or three uncles like that. My Uncle Bill and Uncle Travis were always listeners. Not around Uncle Travis a lot because he lived in D.C. and wasn’t always in Arkansas. And, then there was my Uncle Frank, married to my dad’s sister, Aunt Dot. Uncle Frank, who I called Uncle Shank because Uncle Travis put me up to it, was a character. He retired from sorting mail on the train cars between Little Rock and St. Louis. I bet some don’t even know that was how they did it back in the day.

My Uncle Travis was the scoreboard man at most of the big golf tournaments in the Little Rock area for years. He was once the greenskeeper at War Memorial Park – back in the 40s. I don’t think they were sand greens then, but had been in the 30s, I think. Uncle Frank would tell me golf stories about my dad and his brothers. He knew them all.

Sam is a good man, I feel bad for him, he gets his dream job and then all this crap comes up and makes his job that much tougher… I’m really pulling for him though, good people like him deserve to be successful.

I think he’s a good coach, too.

He’s a very good Coach for sure.

After visiting with him one-on-one twice, I believe he understands the role of a head coach. I also believe he’s firm enough with people when he needs to be and that’s important, too. He said he knows that to listen is most important. Then, everyone believes their voice is important. But he’ll still do what he thinks is right. And, hard work is what is most correct.

Clay, what was your early opinion of Chad M as Head Coach?

I had a hard time figuring him out. Good guy. As far as his coaching staff, I was in a wait and see mode. I feel different than I do now with Sam as far as assistant coaches. I knew Chavis could coach. I still believe that. The speed on the last four or five defenses was so poor that I don’t know if it mattered who coached defense at Arkansas the last few years.