State of the Hogs: Davis compared to great

Here is a hoops commentary about Devo Davis after a visit with Jimmy Counce and Pat Foster: 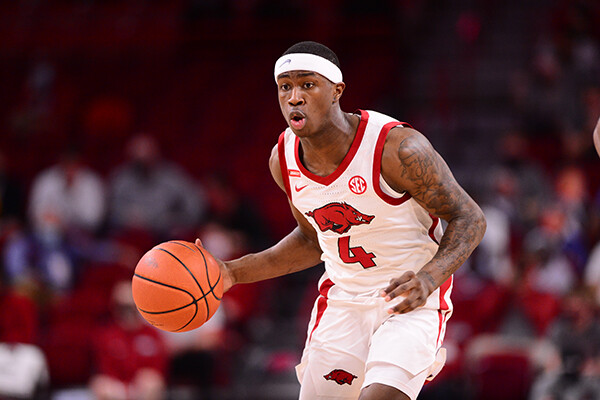 State of the Hogs: Davis compares to Razorback great

Excuse me, but I beg to differ with Jimmy Dykes after listening to his analysis of the Arkansas victory over Kentucky.

Sir Sid in my favorite hog ever, any sport. he was always so kind, when I asked him for autographs. I have autographed SI, autographed “Sir Sid” poster in the Bucks, I had a cigar box of his autographs on random pieces of paper.

He was my true hero, even ahead of Staubach.

“Counce played with the Triplets — Moncrief, Ron Brewer and Marvin Delph. All were 6-4.”

Written like it was long, long ago. I watched every home game at the Barn during the 77-78 season. Magical…seems like yesterday, though.

The comparison is as a freshman and to have some Sidney-like traits.

He compares to Sidney as a freshman.

He does have that “look”. You see a special desire in him and really nice athleticism. Even if only 2-4 from the 3, I like that potential 50%; still, he seems to understand his game while a frosh on this team. Plays smart; just like his steal at the end of the game. Jones did that last year, but he was a senior. No one else on this team was stealing that critical pass.

Jones was not a senior last year. In fact, if we still had him, we would probably be ranked in the top 15. He was our alpha. In retrospect, losing him was probably worse than losing Joe. That said, I love Devo. As Jimmy Counce said, he is perfect for this program…he is all Hog, he plays his butt off, and he is not quite good enough to leave early. If he ever strengthens his right hand game (which he will), he could be an AA before he leaves.

There is likely only one Super Sid, but the way Devo attacks and the energy and athleticism he shows, I have Sid flashbacks when I see him.

There’s only 1 Super Sid! Just mentioning Devo Davis in comparison to Sidney Moncrief is a bit early. Devo has a long way to go in his college playing days. I hope Devo writes his own story and plays his own game. He has a nose for the ball and is fearless.
Making plays and impacting the game like he does he has a chance to really be special. This years freshmen have a chance to be special as well.
What reminds me the most in comparing Super Sid and Devo is the way they talk about “Team”!

Reminds me more of Alvin Robertson on the court.

I’m glad you posted this, Clay.

I’ve been telling my Hog buddies here in DFW that Davis reminds me of a young Sidney for about 3 or 4 weeks now. Some agree, some don’t. And I understand. When you invoke the name of an all-time great like Sidney, you have to expect some pushback.

Note - I have not said Davis is the second coming of Sidney, nor to I expect that…just that he has some qualities that remind me of a young Sid, plus he somewhat favors him in size and appearance (at least, to my eye).

But I didn’t want to post that here until someone else noticed and posted it. For once, I wanted someone else to take the heat of being the first guy with a “controversial” take that everyone poo-poos at first but later comes around to. This time, I’d just chime in and agree when someone else made that comment. It helps that it’s you, because - as we’ve discussed in the past - you typically don’t get the hostile responses that I do when I post an original thought here. Oh - you’ll get some, but nowhere near the same volume.

Going forward, it will be very interesting to see how Davis "Devo"lops over the next couple of years. While I don’t expect anyone to every become Sidney’s equal, I do think Devo - already a very nice player who adds something no one else on our team provides - will eliminate the few freshman tendencies he has and become a leader on a team that goes deep into the NCAA tournament before he leaves campus. More of a Lenzie Howell type impact than a Sidney impact. Different game entirely from Lenzie - but similar impact on (hopefully) some good teams.

Pretty sure that was also Pinson, that Devo beat to the loose ball in the backcourt

Pinson hooked Devo with his off hand on drives a couple of times. Joe Lindsey wasn’t going to call that.

I see Sidney-like traits. That’s all I’m saying. And all that Pat Foster and Jimmy Counce are saying.

Davis deserves credit for stepping up and making the stop in OT after Pinson had his way with him for a lot of the day, and after Davis also had a tough shooting day, offensively.

Before that stop, Pinson was 5-7 on 3s and 7-12, overall, with 3 assists and 1 TO after having the ball much of the day with Davis guarding him.

Davis didn’t let that all impact him on the last possession, though, and he did a really good job of playing time and score and pressing up on the 3-point line, guessing, correctly, that Pinson was hunting the 3 rather than a quick 2.

Pinson had used penetration and change of pace to get open all day, but with the threat of penetration being mostly gone (or lessened) Davis used his length and made a big stop.

He also used his length and quickness a few other times to get some lose balls and rebounds that had an impact. It was a mixed bag for him, but he made a big stop at the end, after they had really struggled to get stops down the stretch.

Davis got no help on the pick and roll from Connor on stopping Pinson. Getting Connor out of the game helped slow down Pinson. And some of Pinson’s 3s came when Davis left to double one of the Smith’s. That was a coaching decision. Tate - with four fouls - was having trouble on the ball down the stretch, too.

I get your thoughts on Pinson. Every time Devo left him I said “oh no.” Devo gets over screens for the most part. But Pinson did a nice job of cork screwing into Devon and hooking him with his arm a couple of times. Gotta get him help if refs not going to call it.

Leaving a shooter to help on another shooter can back fire.