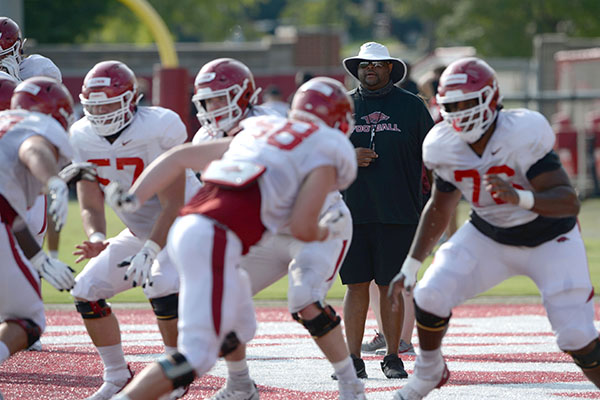 State of the Hogs: Assessing the offensive line

All my life I’ve heard that the key to playing football was blocking and tackling. It’s boring stuff to most. They’d rather draw up plays and pretend to be the coordinator.

I took your advice on watching the center and guards last year on occasion. It was mostly ugly. I’m excited about the future. But understand it won’t be over night.

Great job Clay ,the game is always won up front and takes everyone working as a unit,pad level,leg drive and feet position have to be mastered by all and why it takes time to build Great OL… looking forward to seeing how we do against Ga.who will as tough a test for any offense much less a brand new one as anybody in the country faces.

Your best subject matter -even the ruby midge. I love me some Oline. It is the key to so much. Clay told me about what Johnson had told him some years ago and changed the way I watched football. I could not watch the past few years because we were so bad in the Oline. Just pitiful. I use to watch to see which way the LOS moved at the snap and that was telling, but then I started following the center and wow.

Most people watch the pretty boys and that is fine, but the Oline is where you win. I remember Frank’s last SWC champion (beat GA by the way). They had great running backs, but they got injured. The next set was pretty good as well, but it really did not matter because that Oline had such control that they still moved the ball.

One other thing. Take the ave SAT of the position groups and see which normally ranks highest. They are not big, “dumb” jocks. It takes brains to play in the Oline.

Thanks, Clay. I have begun to watch the o-line from my seat in the S end zone. I have not quite perfected the viewing yet. But I suspect that when I get to return to a game next year, I will be able to do that. I’ll try it while watching on TV, but the perspective is not quite the same.

Been watching the Oline a long time. Last year the Oline wasn’t great, but there were plenty of plays where the Oline was blamed and it was clearly QB play that was poor. It was also obvious that pass pro with undersized guys was tough, along with the Oline coaching were major issues. The number of complete missasignments was hard to watch.

Hoping this year both QB and Oline have improved dramatically.

Good job Clay, your article is a keeper. Merv was outstanding as a position coach. It’s nice to know Sam and Brad Davis can flat out coach as well. This line will be much better this year.

I believe that it will, too. But it is going to take some time.

Yes it’s going to take time and Georgia probably is the last team you would want to break in a new offensive against… it’s going to be an absolute War upfront, I’m not real comfortable with Wagner at RT, somehow someway we have to give Frank’s some time to throw if not it’s going to be an incredibly long day