Here’s a little Jalen Catalon stuff after talking to Kenoy Kennedy and the man who recruited Catalon: 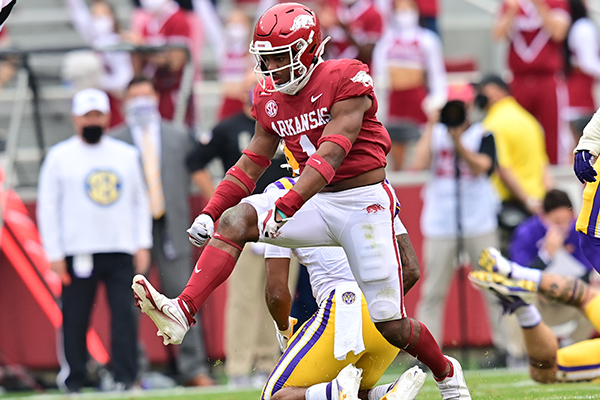 It’s better to be lucky than good, but plain old good is best.

Good stuff. Kennoy was really the first safety I started watching as I was in college at the same time. He’s been the best since his time here at that position from a hitting standpoint, though he could cover some ground. His endorsement says a lot. It’s hard to say anything bad about Catalon. He’s got a bright future.

His leadership persona added to his football smarts and
stud ability makes me think he could become a great coach
if that’s the direction his heart takes him. We are blessed to have him as a Razorback. We need some more players with his drive and skill set.

Thanks Clay, loved this story!

Good stuff Clay and when Kenoy Kennedy has your back, that’s says a lot.
Catalon does it all right including that tackle that got him a targeting call. Hard to adjust and do it any better in the heat of the moment full speed, but he did.

Yea I’d be interested in knowing was CSP said. Doubt we will ever know because it was probably “great hit, that’s how you get paid in the NFL, so don’t change anything”!

Fun story to write. Next week with Webb City Mark Smith will be good, too.

Mark Smith had a buddy that used to post on this board (HDN ERA). He brought lots of football knowledge to the board.

Does anybody remember his board name? Is he still around?

JoeHogWild is from Webb City. He is still around, but not on these boards.

You are talking about Joe Goddard. Joehogwild. Have not seen Joe around UA stuff in awhile. Good dude. He’s a Webb City guy like Mark.

When I wrote for the Traveller, I wrote a feature on Kenoy and it was so much fun.

I talked to his college teammates and HS coach and they raved about him as a player and person and he was very accommodating to me.

He played before the targeting rules and had some monster hits. He was seemingly a quiet guy but carried a big stick.

Zac Painter told me the story about him hitting the UK receiver so hard he went to the wrong sideline.

Catalon reminds me a lot of Kenoy-both “undersized” but hard hitters. I love them both.

I love calling Kenoy. He is engaging and a fun interview.