State of the Hogs: Arkansas football team has to find its Kopps

Here is a commentary after listening to Sam Pittman’s media day session: 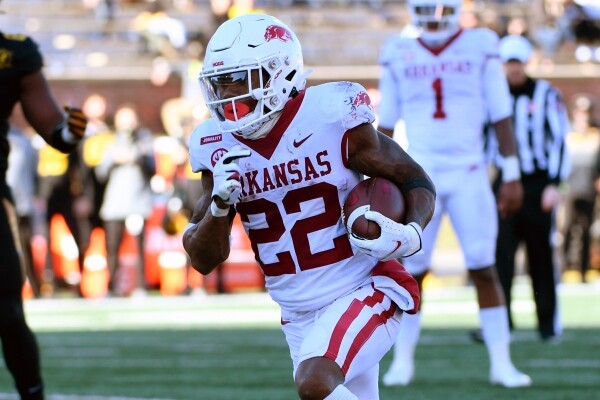 Most everyone in the Broyles Center leaned forward when the magic question surfaced about 75% through Sam Pittman’s question-and-answer session.

Clay hit it right on the head. Notice, backup or I like to think, other running back. It takes two, really three. Then he went onto Oline. Pitman knows what is needed there. That little slant pass should be a surprise and not a have to. Let the big guys clear a path and the running back run hard and by all means and most importantly, still have the ball when the play is over. If you can do that, all of a sudden that little slant pass has a chance to become a very big play, but first you must prove you can make one or two yards when they know you are going to do it. All the pretty boys in the world will not be nearly as great until you can do that. I still remember 11 plays from inside the aTm 1 for no score. It all went downhill from there.

Give them a crack and BOOM!

Also, we need the best 5 on the field for the OL…
I love Luke Jones and Brady…. But if we put Crawford at RG, placing him between Ricky at Center and Myron that could really help him with assignments…. But I don’t think he leaves RT and I think he pushes for a starting spot.

We will see if TJ and AJ can hold onto the football. That goes for Trelon, too. He was not perfect on ball security.

I can recall when Alex Collins made his first cut in an August scrimmage, it was a thing of beauty. You knew he was going to play. Bret Bielema and the others on the coaching staff knew he would play, but also mentioned ball security as the thing that he had to improve.

Young players can and will cough it up. TJ Hammonds has never shown a great deal of ball security prowess (do those three words go together?).

“Ball security prowess” certainly goes together when talking Hammonds, who has shown himself equally capable of the highlight reel play and the stomach-churning gaffe. This isn’t JH or HS ball. You cannot give the monsters of the SEC an extra possession, especially if its a short field (or was a short field for you at the time of the fumble).

No, I’m not a TJ Hammonds “true believer,” but I do not dismiss the speed and ability to flip the field.

As stated above, the most important thing a running back must do is have the ball when the play is over. All of that other stuff does not matter if he coughs up the ball.

If the line can block the way Pittman’s history has shown and wants, then the backup running back will NOT be the most talked about player—it will be the QB as it always has been. KB will be able to run his offense from a run first decision so the offense should be more explosive with bigger plays for gains.

If offensive line cannot block , then there is always basketball and baseball to forward to.

But, this story is about who might surprise among the running backs. We knew that Trelon Smith was an adequate backup to Rakeem Boyd last year. I’m not sure they know who that could be right now. Camp will sort that out.

Which one steps up? If you have that name, let me know. I guess your point is that you don’t think it matters. I believe it’s more complex than that. Knowing who to block in pass plays is a requirement to play running back. Holding on to the football is the next requirement. You can block well in the other positions and if you don’t find someone who can do that, the offense will not run smoothly.

I did mention some of the issues in the offensive line. I never skip that aspect, as you probably know.

The question wasn’t who or what will be the key to the season. It was who will be the surprise. If your question is different, that’s fine. But I didn’t set out to answer any other question.

I’m a huge fan of AJ Green reminds me so much of Felix Jones I will be very surprised if he doesn’t make a very big impact… he’s the best running back we’ve brought in since DMAC and Felix IMO.Don’t be fooled by his size,He is Ripped!! looks like a Jr/Sr already.

Enjoyable and thought provoking column, Clay. How big are Wagner and Henderson now? Hopefully, as you said, that O line will be opening some significant holes for whoever wins the second and third slots at tailback. At least we have a group to choose from…

No issue with your articiple Clay, I thought it was spot on but my remarks are the oline is the key and SP has to be able to run the ball when he wants. I agree that Crawford is likely a guard this year and tackle next year given Pittman’s prior history. Running back in SEC as you say is highly skilled job , and not one that just anyone can do–McFadden, H. Walker, Bo Jackson and many others are evidence of that. But I think a strong o line allows the running backs to grow into the role and coaches determine who is best. But learning pass blocking , etc while trying to learn speed of game and contact is not easy for any back. McFadden did not really start to make an impact until his mid point of season–it takes time.

But QB is still the key. Jefferson can do the job I think—limited game experience based on Mo game but it is hardest job on the field in today’s game. He also needs strong offensive line which you mentioned.

You did great job pointing out what Pittman felt was the concern for team and he has said same at SEC media days and during time after spring practice. I just think Pittman feels the line will be better but will it be better enough is my question and maybe his as well.

The story was not about the key. Oh well. I’ll move on. Cotton has a good column started on importance of O-line. It’s always so key to every team and this year is no different. I think depth is better and fairly easy to pinpoint and that’s a change.

Clay, did you see those monster thighs on AJ today?

I think I’ll stick with my pics, AJ and TJ as the surprises….

And I know he’s not a RB…. But KJ is going to rush for some yards….

Kopps was our QB; it’s all about the QB

First team guys are not a surprise. I covered that!

But I understand your thoughts. All good.