State of Hogs: Keys for Rice 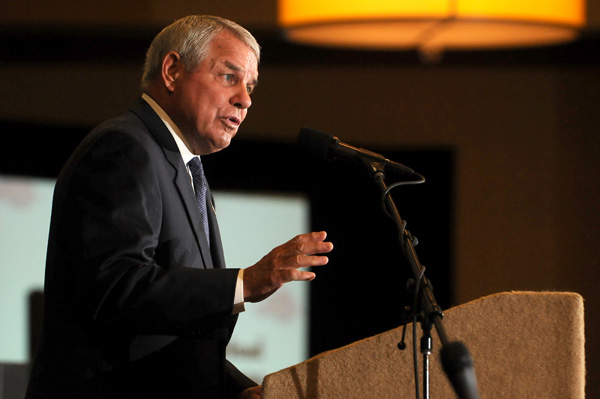 Ken Hatfield always delivers the goods. The man who I think is now the greatest ambassador for Arkansas football did again this week at the first Hawgs Illustrated Sports Club.

Ken Hatfield is one of my all time heroes in life and as a Razorback. I’m predicting CSP has instilled the care factor which will translate into physicality. Go Hogs

Great Job Clay,yeah this game will be a Phone booth game and the tougher team will win provided TO’s don’t cost them…I loved these type games,no trickeration,just me against you buddy.snap it and lets go!!!

@youdaman you’d think you were once a line coach……

Clay what is the hogs illustrated sports club? I want to come to one of the events if I could?

I could talk ball with coach Hatfield all day if I could…. The one thing I’d love to hear his thoughts on is how he would have built the team those two years he would have had going into the SEC….

Just starting. No tickets have been sold yet. Basically, advertiser events.

Intentionally small crowd because of Covid. Indoors, tough to pack a eating hall.

Next week, speaker is Travis Swanson.

Clay do you remember D Mac’s freshman year and the run he had at Alabama? When he stiffed armed a future hall of fame FS, and just blew by everyone…

I’m curious when we see that type explosion from Hornsby? Because I want that on film for all our opponents to see and have to spend practice time preparing for… two QBs can be a blessing and a curse, if applied properly it can be frustrating for our opponents….

Also I’m not by no means saying Hornsby is D Mac…. Just saying let’s show off that speed…. Which I heard is next level.

I get your point. Rocket Sanders may have one of those moments, too.

I am curious why Hornsby gets a goal line package when the defenders are bunched in tight. I think his big play ability will come from having the ability to scramble after having the WRs either be wide open or take the CBs and Safeties with them, leaving his excellent speed against LBs.

Seems KJ should be the better goal line QB with his size.

What is the benefit with using Hornsby on the goal line instead of KJ or even bringing in a someone like Rocket or Dom in a heavy package? I get he might get a step and can slice into the EZ, but not sure you want the little guy taking hits.

I guess it’s just a matter of what you think is a weak spot of a defense, a safety that can’t cover the alley against true speed.

Best play on the goal line has always been the option play with a great runner at quarterback.

If you will remember, Bobby Petrino favored an option play on the goal line on third and fourth downs.

I’ve had thoughts this week that Rice could be Rocket’s coming out party.

Hope it’s a lot of Hogs coming out party.

If this game is close, I will be surprised. I get the feeling that the team as a whole is like a coiled scorpion just before it strikes. Statement time coming early in Fayetteville.