Off topic, but fun: 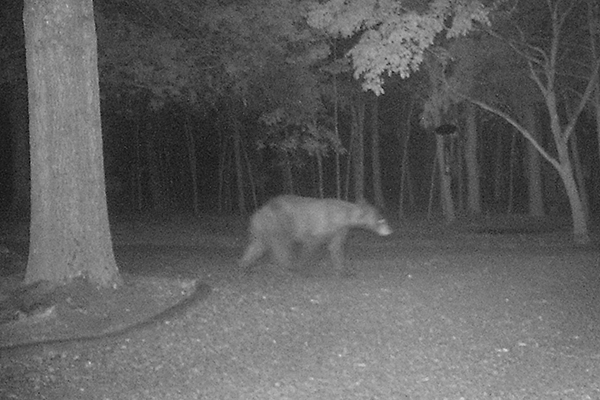 State of the Hogs: Don't help the bear

One of Nolan Richardson’s favorite lines took on new meaning at my house Thursday night.

Definitely would not want to corner that big rascal! He can have whatever he wants

Yikes! My new dual champion just came home. While he was running in a field trial, he began chasing a coyote. That first day his trainer/handler did not see what he was chasing. The next day when he took off, they followed. He had caught a coyote. They think that because there were a lot of pen-raised birds released for the field trial, that coyote was full. It took a little work to get Colt back to working birds and not chasing “vermin.” It was a little scary when I heard the story, because coyotes can easily be rabid. Luckily he had no problems.

A coyote has lots of disease and bacteria in its teeth. A bite can cause serious issues for human or a dog. It was Rockey who went into the coyote den. He had no marks anywhere. Vet wanted us to check him extremely close. He had cancer and had to be put down about 2 months later. Don’t think his visit to coyote den had anything to do with it. But it sure scared us. Jean Ann pulled him out by his tail. He had a pup in his mouth like a stuffed toy. She made him drop it.

Now is the time of year when younger bears are being pushed out by their mom’s to fend for themselves before the mother bears (sows) go into heat and start the process again. Like a typical teenager, they are young and dumb and tend to cause the most trouble. I’ve got a friend who raises bees. They’ve had a couple of recent visitors and he said he knew they were younger bears that weren’t quite sure what to do because a mature bear would have smashed the hives and gone right to it. The bear in the photo looks like a mature bear though not a younger one. But they are definitely out and about.

Our niece and her family have a vacation house on Lake Lure in North Carolina near Asheville. There are lots of black bears in their area so they have to try and “bear proof” their trash cans. They had a heavy duty wood little building built with a heavy wood lid that the trash guys swing up to pull out the cans. (There is a steel latch that is supposed to be bear resistant.) They installed 1/4" diameter steel nails every 6" with the pointy end sticking out 2" on the outside of the walls and top to discourage the bears. Their bears finally tore the enclosure apart to get to the garbage. Good luck.

Remember the old joke about two guys out for a walk in the woods. A grizzly bear came after them, they both started to run, but one stopped to change from his hiking boots to his running shoes. The other guy yells “what are you doing, you can’t out run a bear”. As he ran by him on his running shoes he yells back “I don’t have to outrun the bear, I just have to outrun you.”

You just need to bear proof your stuff a little better than your neighbors.

I don’t think we got anything out that a bear wants. No sightings last night. He’s likely moved on, as AGFC predicted. He found nothing to eat and hauled out of our neighborhood.

We all have cameras and if he was around, he would have been seen.

We see bears quite a bit in Alaska, this was on the news the other day: 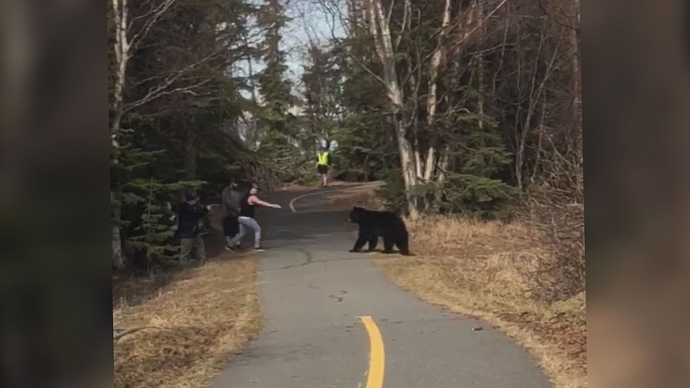 An encounter between a group of pedestrians and an overly curious black bear at Kincaid Park ended with both parties walking away unscathed Sunday in what a local wildlife official says was likely the best outcome considering the potential...

The guys showed some real restraint in not shooting.

No one has seen the black bear the last 24 hours. He’s probably long gone. Fortunately, no one has feeders (right now) since the rules on CWD have hit our area. And, no one leaves a garbage container outside any more.

Hopefully the hunters will stay away and allow the bear and other wild critters live in peace.

Bear season in our county is Nov. 9-30. So it’s safe from “legal” hunting right now.

We used to live just north of Orlando in a suburban neighborhood maybe 200 yards from Interstate 4. We had bears all the time through our yard and had our share of scares when one would unexpectedly walk around the corner.

We’ve been gone from there since 2014, but a few months ago I saw that the folks that bought our house caught a bear on a security camera in the middle of the night. The bear opened the passenger door of their car parked in the driveway and climbed in like he’d done it a million times.

Yikes. Bear in the car is really scary.

Crossed paths a few times with black bears in the Winslow/Boston Mtns area, 30 minutes south of campus. Friends there had hung a gutted deer from a tree in their backyard after a weekend hunt. The deer disappeared overnight & the ground surrounded with bear tracks. As frequent visitors, we learned to keep a pistol nearby as a last resort, especially in the evenings.