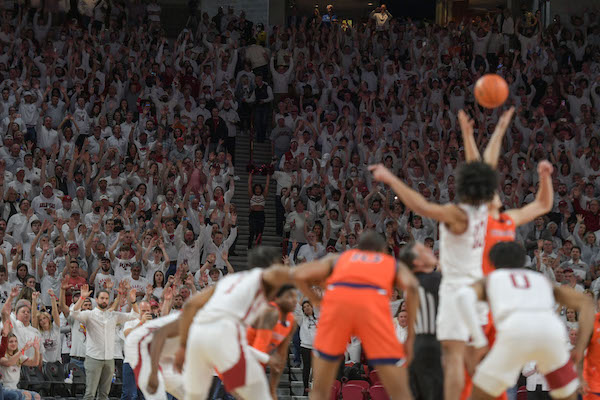 By the way, I think Dane is excellent.

SECN has some great talent. Speaking of Tom Hart, he just said The Bud last night was the loudest arena he had ever heard. And Jimmy said he doesn’t think we will lose another home game, and I agree.

I thought the broadcast last night was top notch. Tom Hart and Dane Bradshaw are right on point and smooth. I knew Dane was a Vol alum but had no idea he ran Thunder Thornton’s company. Thunder is a legend here in Tennessee. He’s about to develop a huge residential development (7,400 acres) near the Tennessee river. Similar to Hot Springs Village or Bella Vista.

I toured that property with Thunder this fall. The views reminded me of the Arkansas River from atop Pettit Jean. Thunder Enterprises is a huge operation.

I think he is, too—one of the best they have, IMO.

Nitpicking, but I think Joe Tessitore did PBP for the Texas game?

Correct. Joe Tess and Greg McIlroy, who are also both very very good.

I agree and good article. But it got me thinking. Muss has had constant staff turnover but he manages to get spots filled and working they way he needs. My question: what do they do? Is it like football where each coach has a certain task or focus? I’m kinda curious what each coach does and how muss builds that staff. Maybe it’s top secret but if we could get some analysis of the system (if anyone knows or can find out) that would be awesome.

The scouting is hyper intensive. It may take 20 hours to prepare for a game. Obviously, they work on a team far in advance. I will write about that later.

Thanks. I’m kinda interested in each coaches role. Is one responsible for defense. One for shooting technique. One for scouting. I just don’t know.

I won’t have that information. That’s not the angle.

Thanks Scott. I got that Texas game confused with another. I don’t watch them live, but usually go back later. Interestingly, I’m not a fan of Tessitore. He screwed up the Arkansas punt returner name for the last three quarters (after Nathan Parodi took over for Greg Brooks). He called Parodi as Bryce Stephens. They wear the same number, but obviously they have the names on the back. Of course, no one in the truck corrected him, either. Tess seemed to say the same things over and over. I got it the first time. Thanks for the correction. Fixed.

I work talent stats for TV from time to time. Dane is one of my favorite analysts to work with. I don’t think he has an ego; just very down to earth and always appreciative.

He’s going to be the next Brad Nessler of ESPN. I love the way he calls all his games. He’s great at football, basketball and baseball.

If you pay close attention to games done by Tom Hart, he always throws in something local from the area of the game he is calling. He’s mentioned Dickson St. (multiple times) Theo’s, Foghorn’s and Herman’s on our games.

I wasn’t too impressed with Hart at first but he’s grown on me. I notice the local touches too.

Dane was appreciative of the story. No one thanks you much anymore, but he did.

He loves Pat Bradley, Joe Kleine and Jimmy Dykes. He said all help him.

Clay, great article…I wish I was there……I had a chance but had to decline due too a previous commitment…I got to watch the game…totally agree with your comments. However, being an old guy has its rewards…I was at the game in Pine Bluff.

This is well written story as noted. Kudos to you Mr. Henry. I agree with you about the fans but I also hear our fans say we do not get respect. The story shows that yes we do, we just have to earn it like everyone else does. I am struck by announcers, players and coaches saying this will be remembered for 20 years etc. I cannot recall another game getting this tagline . I know the 1969 football game has left some scar tissue in my brain for along time , but I did not think in those terms when it happened, I was also struck my reading and hearing the comments of Nolan Richardson on the game and his full embrace of the team’s and fans efforts. Winning cures alot of problems–even if costs $250k.