Paul Meyerberg of USA Today wrote a column stating that the University of Indiana should hire Muss. As frequent readers of this board know, I have been worried by the threat of losing Muss to a traditional power who offers him a huge raise. While Muss does not seem like one fixated with money, everyone who is offered a big raise has to look at the offer.

Muss is a once in a lifetime coach. He does every thing that a great coach does. He can recruit high school stars and mine the transfer portal. He is always prepared for every game. His game plans are excellent, but if he needs to make in game or half time adjustments, he is not hesitant to do something else. He has reignited both the student body and Razorback fans everywhere. Razorback enthusiasm is back to levels unseen since Nolan’s dominate run of the early to mid 90’s.

I hope that the U of A takes this threat seriously. Muss is going to win a national championship. It should be in Fayetteville.

What’s Indiana got that we don’t got? Seriously.

I think Indiana will go super hard for Porter Moser.

I think that the Razorback basketball job is as good as any high major job. I just don’t want to lose him to another school.

We can match IU dollar for dollar. In fact, I’d say we’re probably the wealthier program. And sweetchild is right–what does Indiana got that we don’t got?

I think we’re safe unless we refuse to match an offer. I’m not worried about that happening.

Hold on it’s been said that Indiana has chicken farms and processing plants to.
Won’t be an upgrade there, sorry.

I expect that will be the case. I just can’t stand another 20+ years of mediocrity.

Nobody can hire Saban. I want Muss to be as important to Arkansas as Saban is to Alabama.

Hunter was in the process of getting the money in line to keep Muss before the tourney started. If Muss leaves, it won’t be the lack of money.

I could be wrong but I would be shocked if he left.

What’s Indiana got that we don’t got? Seriously.

Answering my own question - Nothing. 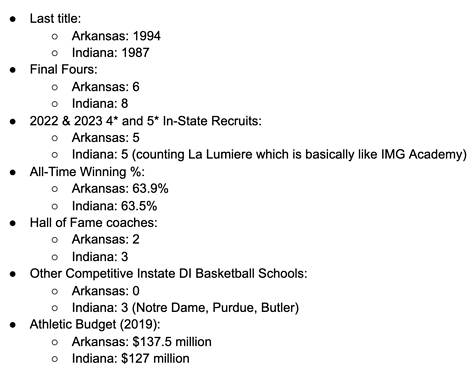 The coach has done a fine job. However, I will wait at least one more game before I declare him the greatest around.

He should have got it done before the tourney haha, every round we advance from here brings more of a fan frenzy and the $$$$ goes up

The fact that there is not another Power 5 basketball program in the state to compete with for talent has to be a major factor in any coaches assessment of the Arkansas job.

To me the thing that makes Coach Muss unique is that, although older than guys like Oates, I consider him a modern college basketball coach.

What I mean by that is that, while I doubt he loves the transfer portal, rather than complain about it he has chosen to embrace it and turn it into a positive. Same thing with social media–he uses it as a tool to elevate the program with recruits and with media. Both of these things would drive “old school” coaches like Bobby Knight (or probably even Coach Richardson) crazy but Coach Muss uses his “energizer bunny” energy to go all in on them and not use them as excuses.

To me this is why it is so important that we lock him up with a long-term contract. Just not that many coaches his age who have the coaching experience combined with the embracing of modern recruiting.

Bobghawg, I think you’re in the minority with your thoughts. He deserves a very good contract extension. I hope, as a fan, he gets it!

He should have got it done before the tourney haha, every round we advance from here brings more of a fan frenzy and the $$$$ goes up

Jerrah must be giving him negotiating advice…you know, the same advice that led to the Cowboys signing Dak for $42M/season when they could have signed him if they’d have offered him $25-28M per year 18 months ago.

Arkansas has never had a coach – and I mean somebody coaching at Arkansas – leave over money. If Arkansas wants a coach to stay, they can and will match or beat the money any other school can offer. So if Musselman leaves, it won’t be for the money. (Distinguish from the coaches we were trying to get to come to Arkansas, that we did not get when another school matched our money.)

Even though it’s been 25 long years in the wilderness, Arkansas regained the lost blue blood prestige quickly. All it took was one winning team.

Point being that if you are a coach and winning at Arkansas, you don’t gain anything by leaving for any other program – except a lot more pressure if you go to the likes of Kentucky, Indiana, Kansas, Carolina where national championships are expected every year.

If Coach Musselman and family like it in Arkansas, he can retire a happy and wealthy man with an historic winning record comparable to that of Coach Richardson.

Alabama did that with Oates. New contract prior to NCAAT - 3.5+ mil a year.

Lol I’m pretty sure that Jerry has won more negotiations than he lost. Look at his bank account. Or the worth of the cowboys in 1989 vs today. That’s a hell of a return

Truth. And muss knows that bud Walton’s roof would’ve blown off a few times this season if we’d had full capacity. We have the money, the facilities, the history, the rabid fans…if he likes it here, why would he leave?