Special Teams should (and have to) get better (column)

Special teams have not passed the eye test and the numbers backs that up.

Fair catching the kickoffs on a regular basis? SMH

At least there are some recruits coming who should help. 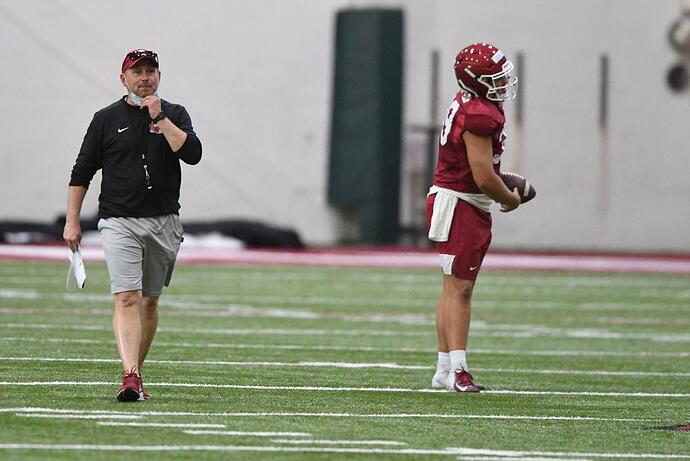 For whatever reason, I have always had a fascination with a football team’s special teams play.

Excellent points Dudley. Way back in the 60’s most of my playing time was on special teams. I was short, skinny but was not afraid to stick my hat on anybody. Coach Harris loved my willingness to play all out.

I believe help is on the way. I sure hope that’s the case.

did Sam try to deceive us to protect his friend? much of our mistakes and especially early were predicated on dumb coaching scheme, and coach does make the choice of who is out there not able to return a punt. As good as GA has been in ST play, there must be some Fountain credit for residual. Cannot limit and certainly not remove such a valuable recruiter. Need a really good assistant that was like the kid under Petrino and maybe JLS who did recruit and actually do analytics for ST. I forget his name but he was a loss when he left.

Need a really good assistant that was like the kid under Petrino and maybe JLS who did recruit and actually do analytics for ST.

I think you are referring to Marty Biagi, who is now special teams coordinator at Purdue and was the mastermind behind the fake fair catch for North Texas a couple of years ago.

3 punt return yards for the season is unbelievable!

Fountain’s resume tells you this year was abnormal as far as results.

Not a big difference but it was 18 yards for the year which is amazing considering Burks was back there quite a bit.

Would be shocked to see similar next year.

Punt returners have a special place in my heart. When you’ve stood back there while 11 folks bearing down on you full speed you appreciate them more. It’s been over 50 years since I’ve done it but the memories are vivid.

when we were a true power, there were names likd Kenny Hatfield and Martine Bercher who led the nation in PR as Razorbacks, could be a connection? we did some dumbpass schemes that were penalty prone early on punt coverage and then had Jonathan Marshall back blocking which wore him down and exposed him for his lack of open field coverage ability. Using 14 as a returner just proved what is good enough for high school is not good enough for SEC. Strange choices. GA actually got better on special teams after our new ST coach left, was it him or was it talent? Recapitulates that you gotta have the Jimmy’s and Joe’s not the X’s and O’s.

nd was the mastermind behind the fake fair catch for North Texas a couple of years ago.

I still don’t like that play. You are running down the field after a punt, there are guys between you and the punt return guy. How are you supposed to know if he calls a fair catch or not? It is an invitation to blast the defenseless punt return guy who DID call a fair catch, because you didn’t see it and you have been fooled before.

I know I am a voice in the wilderness on this one. If I had been Chad Morris, on the next punt, I put in a third teamer who wasn’t going to play anyway and tell him to rock the punt catcher’s world, fair catch or not. If that is how they want to play it, play it.

I agree. Trickery is one thing, but this was a deception based on the other team’s respect for the safety of a player. It was a chickens**t call