Texas A&M AD Ross Bjork said yesterday he has initiated dialogue with Hunter Yurachek about potentially moving this year’s game to College Station to replace the game the Aggies lost vs. Colorado. If that happens, Yurachek said it would be fair to expect next year’s game to be played in Fayetteville. 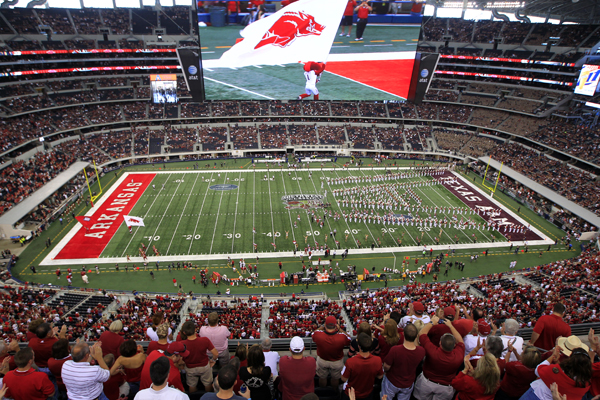 Aggies AD says he might request Arkansas game be moved to College Station...

No doubt AD Yurachek & CSP have discussed & understand if this impacts Arkansas recruiting in the DFW & No. TX markets. For UofA football to rebuild, we need the players from the talent rich TX market where Arkansas has a strong alumni base & presence in the high schools. Assume there is exposure & recruiting value of Hog games being played in KC & DFW.

The game in DFW has much less impact on aTm recruiting but is a financial windfall & home field advantage for them to play at 103k capacity at Kyle Field. Perhaps similar advantages for us at Razorback Stadium.

Jerry Jones needs the $ to offset losses per Cowboys playing in an empty stadium this Fall so will fight to keep the aTm/Hog game in DFW thru the 2024 contract date.

I don’t think we’ve seen the last Arkansas-Texas A&M game in Arlington, but I do think there is a chance we don’t see one there the next couple of years, assuming this year’s schedule is played. If it isn’t played, Texas A&M’s thoughts for this year are moot because Arkansas will be the home team again in 2021 unless the SEC replays this year’s schedule. That would throw everything out of whack.

Long term, this series is obviously moving to the campuses after 2024. The question then turns to how Arkansas will maintain a presence in Arlington. I think it will continue to play there some, but not an annual basis, and probably not always against a Power 5 opponent. I could foresee something like an Arkansas-Houston game there during a year the Razorbacks play their marquee nonconference game (Oklahoma State, Utah, Notre Dame, etc.) at home.

I think we will have games in Arlington but no conference games. It could be games like OK State, Rice, BYU etc. I would all be for moving games to campuses the next 2 years.

Not sure what UH would get out of playing in JerryWorld unless they want to start hitting DFW harder. I count six guys from North Texas on the Coogs’ roster and one of those is a transfer from Colorado. And I don’t think it would be a big money game for them like the SW Classic has been for both sides unless Jerruh just wants to dip into his pockets,

Not sure what UH would get out of playing in JerryWorld unless they want to start hitting DFW harder. I count six guys from North Texas on the Coogs’ roster and one of those is a transfer from Colorado. And I don’t think it would be a big money game for them like the SW Classic has been for both sides unless Jerruh just wants to dip into his pockets,

Despite being a large school, UH alumni & fan following is not overwhelming. Jerry would not be happy with the attendance. aTm & ut will always keep UH out of Power 5 football despite them being a viable program with the opportunity.

My Houston example is of the type of team I could see Arkansas playing there in the future — a Group of 5 or independent that has the potential to draw well. I’m not sure any non-championship game is going to fill that stadium up. At its best, the Southwest Classic has drawn an attendance in the mid-60,000s.

a Group of 5 or independent that has the potential to draw well.

That’s just it. UH doesn’t draw well on campus, never mind 255 miles away in Arlington. The crowd would be overwhelmingly Hog but we aren’t going to sell 60,000 tickets ourselves to play the Coogs.

Would SMU want to play at JerryWorld, only 23 miles from campus?

Would SMU want to play at JerryWorld, only 23 miles from campus?

I doubt SMU would draw much better than UH. Do they fill their new on-campus stadium?

I doubt SMU would draw much better than UH. Do they fill their new on-campus stadium?

SMU was actually 11th in the country in increased home attendance in 2019, jumping up by 4250 fans per game. But that only took them up to about 75% of capacity.

Cougar High played to about 62% of capacity last year on campus.

Cougar High played to about 62% of capacity last year on campus.

UofH is primarily a commuter school for the Houston locals & does not have the same fan following & alumni loyalty as most universities such at aTm or ut. Would be surprised if many would make the long 5+ hour drive to Arlington.

TCU, UNT, TT, ut, or OU would have better attendance.

OU, TT, or ut may be the best options at Jerry’s stadium since TCU & SMU would insist on playing at home since already in DFW. Same may be true of UNT which have almost 40k students but also a commuter school like Cougar High & looking for relevancy. Hopefully not ut & doubt they want to play elsewhere.

“Cougar High” may be appropriate for their support of athletics but they have done some really good things academically since I was snickering about them in college.

The OSU home/home could easily transition to Arlington - both schools have strong Metroplex alumni bases. Tech would be fun as well. By the time the schedules are able to be worked out, UT-SA could be playing bigtime football. Or, not.

UH is strong in academics & got my 2nd degree there after UofA. They are trying to shed their “Cougar High” & “Commuter School” image.

OSU is so close to UofA, not much point in driving down to DFW for a game.

Surprised we don’t play Tulsa more as a preseason warm-up.

I think you find a school to the west that is like Arkansas and would like to increase recruiting in North Texas. Maybe that ASU in Arizona and then tell Wally he got his wish. The Hogs are finally playing ASU.

No kidding. I bet UCLA, BYU, Boise State, etc. might jump at this and might bring some fans with them.

I don’t think the UofA gives this game up if A&M gets out. North Texas is growing into a UofA hotbed with more and more students coming from there to enroll at Fayetteville. This can be a huge benefit for Hog recruiting in all sports long term.

North Texas is growing into a UofA hotbed with more and more students coming from there to enroll at Fayetteville. This can be a huge benefit for Hog recruiting in all sports long term.

The North TX neighborhoods are filled with Hog signs, & HS counselors say that Arkansas is the go-to school for academically strong grads going to college. Since SWC days, most UofA coaches overlooked or alienated TX recruiting. With population of 8 to 9 million in DFW, Arkansas needs to renew its efforts to recruit top players in this talent rich area - same as OU & now OSU & Miss are doing.

Hopefully UofA will open itself up to more out of state students who are high achievers academically. It would help UofA to grow past its current 28K enrollment to compete with other schools as long as strong UofA academics are maintained. Doesn’t hurt that out-of-staters pay higher tuition rates & cover more overhead costs that help subsidize in-state students. Granted many of these students will return to TX to work, but many will remain in Arkansas if the job opportunities exist, especially in the fast growing NWA job market.

It would help UofA to grow past its current 28K enrollment to compete with other schools as long as strong UofA academics are maintained.

Unless plans have changed they don’t want to go much bigger than they are now (27,559 for the fall 2019 semester). The infrastructure isn’t there for 35,000 students. The target when they decided to increase enrollment, IIRC, was about 28K, and it’s been 27K+ for the last three years.

Texas kids pay a little more than in-state tuition at UA but not much. If their grades are good enough to get in, incoming freshmen and transfers are automatically eligible to have 70% to 90% of the difference waived through the Non-Resident Tuition Award program. Kids from states outside the 9-state NRTA area can also get a waiver, although not quite as much and your grades have to be better. I was interested to see Georgia and Illinois are NRTA states, along with every state that borders or almost borders (Kansas) Arkansas.

Also DFW is currently at 7.5 million.

Limits are due to LR legislature deciding that UofA should be no less than 50% in-state students. Problem is that AR is a small rural state & the eligible students in Arkansas is projected to decline. The Texas schools are overcrowded so kids are looking elsewhere. There are private dorms now being built around UofA, & there is still land on campus for growth. With the $200 million gift from Walmart for R&D, there are already new buildings being designed for campus & expansion of existing engineering & R&D facilities, both on campus & test facilities at the nearby research center.

Understood the tuition break & surrounding state breaks as my son just graduated with that tuition break while being a TX resident. He will not get that break when he returns this Fall for his MBA.

Note that Ole Miss & other SEC schools are offering out-of-state students the in-state tuition rates to attract TX students. What helps is that most of these kids are not needing student aid. The high academic students helps the academic standings of the universities without them having to upgrade their teachers. That is primarily the reason the ut is top in Texas. It takes the top 6% of a state of approx. 30 million in TX but academic teachings at undergraduate level at ut is lacking.

Limits are due to LR legislature deciding that UofA should be no less than 50% in-state students.

They hit their target for the last freshman class. Although it was slightly smaller than the freshman group of 2018, it was more than 51% in-state. The 2018 freshmen were just a touch under 50% in-state, but the raw number of Arkansas kids in 2018 was a little higher than 2019.

Also good news is that the 2019 retention rate was the highest ever at 84.2% coming back. Doesn’t do much good to admit them if you lose them after a year or so. Also the six-year graduation rate was 66%.

DFW may be growing like a weed, but the number of college-age kids everywhere is projected to decline. Colleges will be fighting over them, and admission standards may well be eased just a tad.

As for the infrastructure, land isn’t the issue (much), although it’s amazing how much land some schools have. Moo U’s campus makes UA look like a tiny city playground; MSU has seven square miles at Stankvomit, while UA is one-tenth the size. But money to do something with it is an issue. Walmart’s R&D gift doesn’t cover brick and mortar.