Southern U is our opponent Wednesday

Anybody know anything about them? 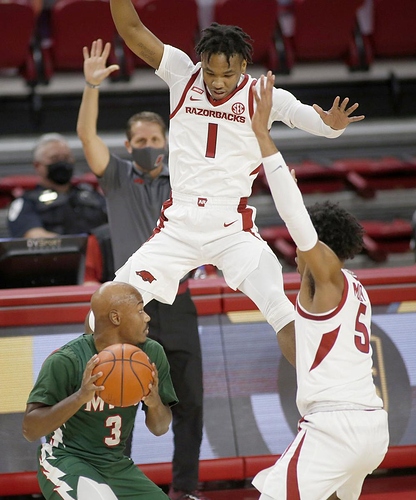 Hogs to play Southern on Wednesday

Arkansas has found a team to replace its postponed game against Tulsa.

Well that sux; same date/time as the women’s game at SMU.

Good job just finding someone. I had rather made a road trip to a better team, but this is far better than not playing at all.

I just read in demo-gazette Muss reached out to Ark- state about playing us and they turned it down.

Go figure. If they thought they had a shot, they’d be all for it. Just like football now, I don’t see a lot of A-State fans begging to play the Razorbacks right now. How convenient.

0-2, lost to North Carolina Central and Iowa, both games played in Iowa City. Hawkeyes won by 27. The NCCU game went to overtime.

They had four in double figures against Iowa but nobody scored more than 13. Senior guard Ahsante Shivers led them in scoring in both games and is averaging 16.5 ppg. They apparently rebound pretty well; outboarded both NCCU and Iowa. But they lost the turnover battle in both games,

Weird side note: They don’t have basketball stats on their website; most recent available was like 2017. I had to go to ESPN.com to get team stats. They shoot 76% from the line and their point guard is averaging 6 assists. Looks like only 7 guys play significant minutes. Their starting big is 6-7 but they have some bigger guys on the bench.

Yes general, I have noticed the samething,odd isn’t it

I didn’t even realize they were playing basketball at the collegiate level in J’boro anymore. Are they still ranked in the top 40 in football?

On paper, Iowa looks pretty strong this season. Sagarin has them at #4. They’re really tough playing at home. So, that loss is a tough read.

Playing Southern, though, is a bit like playing UAPB.

Playing Southern, though, is a bit like playing UAPB.

Southern and UAPB both play in the SWAC, same division too. Can’t go by enrollment or U of A wouldn’t compare to half the teams we face

And they clamor for a game against us in any sport. Yet when asked they turn us down. Maybe this will shut that crowd up.

At least walker admitted they were tired and didn’t want any part of us, yet ASWho provides no comment at all.

And we asked them.

If it were a battle of the bands we would be in trouble (Watch halftime of the Bayou Classic with Grambling sometime if you want to see why).

Record wise they lost to North Carolina A & T in overtime and got whacked by Iowa. They play a lot of people. They seem to have trouble playing defense without fouling, and they have had some trouble with turnovers. They have not played since November 27th.

Southern and UAPB both play in the SWAC, same division too. Can’t go by enrollment or U of A wouldn’t compare to half the teams we face

Since UAPB rejoined the SWAC in 1997/98, they have won 1 conference basketball tournament and no regular season championships.

There isn’t really much comparison between the 2 schools in their basketball programs. Southern certainly wouldn’t be considered a conference power in basketball, but UAPB is generally at, or near, the bottom.

Yet little UAPB is the only school from the SWAC to actually win an NCAA tournament game (if just a play in game) during that time period.

If you base a teams ability to play by their school enrollment then Arkansas should just pack up and leave the SEC since we’re one of the smaller schools based on enrollment.

That would also explain our record against Alabama in football and Kentucky in Basketball right?

Just say Southern historically has a better program and you’d be accurate.

I’m just glad we had a football season and now basketball. No whining from me about who we play. And, as much as it pains some, if we are competitive, that’s really satisfying too.

There is bigger and there is bigger. Surely you understand, among small schools, when one school has nearly triple the enrollment of the other school, it’s going to affect athletic competition. Of course it’s not the only thing that affects their athletic programs, but in this case it’s a significant factor. There’s no comparison to enrollment differences in Power 5 conference teams.

All D1 programs recruit and have the same scholarship & roster limits. Just because they have a higher enrollment doesn’t mean they get 3 times the players.

Now if the statement was made that they have access to recruit more players due to being Baton Rouge and within an hour of New Orleans, ok. But not based on campus enrollment.

Southern has been better overall historically, but the head-to-head has been more competitive.

This has become absurd. You have 3 times the enrollment, you have a bigger athletic budget. You can spend more money in recruiting. Paying coaches, etc. Just because you have the same rules, doesn’t mean the playing field is equal.