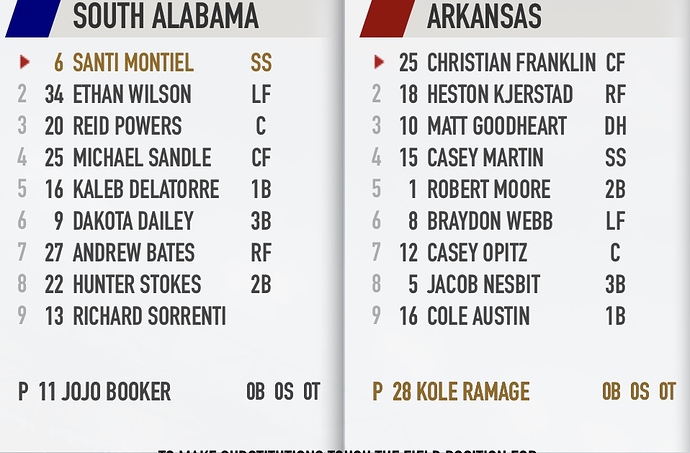 Hey guys he’s going to throw a breaking ball every pitch!!we have sat there and taken pretty much every one of them… he knows what our weakness is… They tried their best to give us a run all we had to do is get the ball out of the infield…

Ramage continues to put the ball right down the middle of a plate and they continue to hammer it about to be down 3-1 smh!!!

Jags playing better baseball than us.

We better get it going…

We haven’t had a hit since the third inning we keep waiting around on these guys and they going to come through the big hit.

This guy has totally shut us down and came in with ERA of 6.75 and the opponents were hitting almost 300 against him…

Walk that sucker off!

When Heston stepped up to the plate I told the wife he needed to hit a walk off homer. She said what is that…while I was trying to explain he did it. She still does not understand wha a walk off is but she certainly understandsa winning HR.

Of all the tweets that I sent today, this is by far my favorite:

Miss St will be waiting on the hogs! I sure hope Noland is able to start
game 1. We sure need the defense to be solid. The unearned runs in Houston cost the hogs some games!
Conference play is here on Saturday and it’s time to show up and play good baseball.
This mid week against Grand Canyon is another chance for the hogs to build some confidence.

Grand Canyon can swing the bats we better hope these young pitchers can be effective or we’re going to be in for possible shootout… Mississippi state will be tough no doubt there Friday night starter has been as dominant as anybody in the nation.

Hollywood script writer couldn’t have written a better and more dramatic ending to the Sunday game.

The hogs are swinging the bats better as of late! I look forward to This weekend and seeing how our hogs play in Stinkville! To have a goal of going to Omaha you have to beat good teams and so far the hogs haven’t beat those type teams! It’s time to get it done.