Someone give me an accurate program comparison, I was thinking USCe in the time of Holtz

gameflops truly sucked and were a given win for any conference team not in a funk or imploding. However, the flops came back much quicker under Holtz than I remember when looking at the record. Quick and successful change is more common with the portal and scholarship limits keeping the big boys from stashing all the talent, but I don’t see anything or feel any appreciation for the movement on the Hill under Coach Morris and staff.

I kinda hope that USCe is a good comparison, but mediocrity did return with a vengeance. I’d love to hear what other folks think is a real similar program state of being for us.

Holtz came out of retirement in 1999 and returned to the University of South Carolina, where he had been an assistant in the 1960s. The year before Holtz arrived, the Gamecocks went 1–10, and the team subsequently went 0–11 during Holtz’s first season. In his second season, South Carolina went 8–4, winning the Outback Bowl over the heavily favored Ohio State Buckeyes. The eight-game improvement from the previous year was the best in the nation in 2000 and the third best single-season turnaround in NCAA history.[25] It also earned National Coach of the Year honors for Holtz from Football News and American Football Coaches Quarterly . In his third season, Holtz’s success continued, leading the Gamecocks to a 9–3 record and another Outback Bowl victory over Ohio State. The nine wins for the season were the second highest total in the history of the program. Under Holtz’s leadership, the Gamecocks posted their best two-year mark in school history from 2000 to 2001, going 17–7 overall and 10–6 in SEC play.[3]

After consecutive 5–7 campaigns in 2002 and 2003, Holtz finished his South Carolina tenure on a winning note with a 6–5 record in 2004. Holtz’s time in Columbia saw the resurrection of Gamecock Football, as the program had only one bowl win and no Top 25 finishes in the ten years before his hire. Upon his exit, USC had posted AP Top 25 finishes in 2000 and 2001 (#19 and No. 13 respectively) and had made consecutive New Year’s Day bowls for the first time in its history. Holtz finished his six-year tenure at South Carolina with a 2-4 record versus his former team, Arkansas, beating the Razorbacks in Columbia, SC in 2000 and 2004. 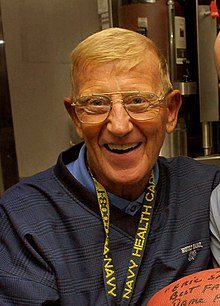 SMU after death penalty. Our talent at QB, O-line, secondary, receiver, and linebacker was really bad when Morris got to Arkansas. You don’t build that back to respectible over night.

Lou Holtz is a no-brainer hall of fame HC, just a wizard. I’m cautiously optimistic of CCM, but no way do I see him as good a coach as Lou. I am optimistic that he’s a MUCH better recruiter than Lou, however.

I’m not sure Lou would have tolerated our OC/play calling, at all. Maybe Clay can comment on that.