Somebody asked if KJ was our first black QB

I am an adjunct at a local college. I had a young man a couple of years ago ask me in front of class why Arkansas had never had a black quarterback. I just looked at him there with his OU hat on and set him straight. The thing I wonder about and I should have asked him but didn’t, is where in the world did you hear that? Who is out there telling that lie about our program?

Of course, I don’t know the young man…but I’m not so sure this is a product of “someone telling lies” as it is simple perception.

If he’s college aged (19-20), you have to wonder what QB at Arkansas he would have seen in his limited lifetime of watching them. Off the top of my head, I don’t remember anyone since Robert Johnson’s limited playing time - what - 15 years ago? So, for this young student, he’s just never seen it and probably assumed we had not had a QB of color.

We all know about assumptions and the care one must make before making one…but this is something he has yet to learn.

That was not the impression I got. Maybe I am right, maybe I am wrong.

Jimmy’s pass to Russell is now tied for third on our list. Matt Jones hit Richard Smith for 92 yards at Neyland Stadium in 2002 In the 6-OT game.

T
I don’t remember Sebastian playing QB. He was a wide receiver.

How soon you forget… 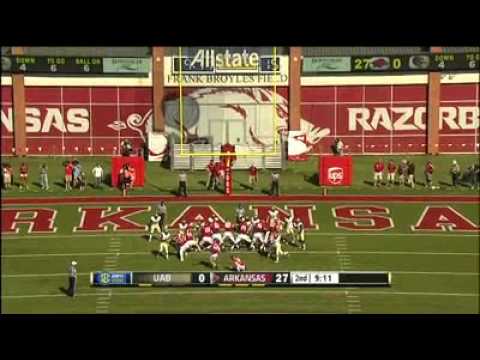 Damn, you’re right. For some reason I remember him being on the receiving end of that pass. Getting old sucks.

Good God. I guess they have never even listened to the games on radio. Or the Razorback Daily.

Quinn wasn’t the first. That was Greg. Who was damn good himself.

The announcers never did get the receiver right. In that formation the deep snapper was also the end, making him an eligible receiver, and he caught the pass from Tretola. Alan D’Appolonio, I think.

Jackson didn’t do anything as a Hog, but he has an NFL pension playing for the Vikings…

Yeah, Quinn is up there as far as best Razorback QBs of all time. As far as my favorites, it’s a tie between him, Bill Montgomery and Joe Ferguson.

Didn’t Dowop Mitchell take some snaps at QB? Can’t recall the name but seems like there was another black QB just before him that also got converted to WR or RB. As far as recruiting, those are some the current generation attending the university should remember.

He died in a car wreck a year or two ago.

The saddest part in all this conversation is that it is even a topic. Thankfully another page turned as mankind continues to gain in understanding in this respect. Now if we can just quit murdering one another world wide. I fear that hatred and ignorance is an ever present hindrance for now. Sports and commerce offer at least a road to continue toward this goal. We must or we may become an endangered species.

Today is a good day. Our Hogs beat Texas and I awoke looking forward to reading this board in celebratory joy.

I was just amazed that this question is still being asked, but it’s probably a case of not having had a black QB recently.

Lajean “Pete” Burks, sorry if I misspelled his first name

Brandon Mitchell never started but was probably the last one before the current group.

I always wonder how good he could’ve been if Petrino hadn’t decided to offer rides on his motorcycle. It seemed like the coaches wanted to see him in a battle with Tyler Wilson. Wilson was tough, but held onto the ball too long alot which caused many of those hits he took.

Bielema might have had a better squad initially if he had played Mitchell at qb and given Brandon Allen a little more time in the slow cooker. Once Allen got injured, we didn’t have a decent qb on the team.

Probably known, but Casey Thompson’s dad was Charles Thompson, OU QB in the 1980s. Hog fans would howl if a legacy QB went to UT.

Actually, maestro, that is not correct. In fact, in this context, either could be used…but after consideration, I still believe evolved is “more correct” (in this instance) than “devolved”.

Not sure why you’re hung up on it…but since you brought it up - there you go!

Why don’t you go tune your piano or something…i.e., “stay in your lane”…lol…

Wiz…lighten up…no one is hung up on anything…
And I don’t tune pianos.

I conduct pianists in concerts long after the piano is tuned. For the record…