Some "way too early" predictions for Hogs 2022 Defense 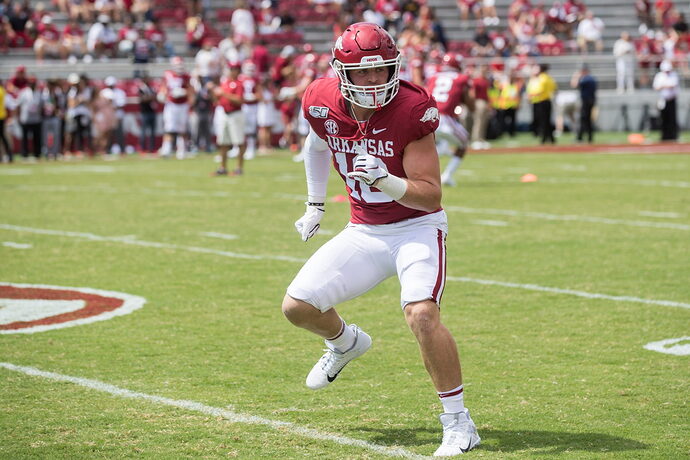 7 way-too-early predictions for Arkansas’ defense in 2022

New faces leave Arkansas' defense with some questions that will need to be answered in 2022.

“Way too early” is the key phrase here….

Count me in the one who’s really concerned about the run defense especially if Carter can’t come back. You will never stop the run in a 3-2 defense without an absolute monster at NG and it doesn’t look like we’re going to have one even if Carter comes back. It doesn’t look like we’re going to get one in the portal either. It is what it is no sense in worrying about it

Sam said Carter didn’t have an ACL. In all likelihood that means cartilage. He can rehab from a meniscectomy in plenty of time.

We definitely need him to be in there

Couple of my predictions:

• Drew Sanders will rack up tackles and be a great complement to Bumper. KJ Jefferson and Trey Knox were really high on him and said he played all over the field. He can really run.

• Eric Gregory jumps out and makes a name for himself. Feel like this has been building. He’s somewhat quietly been a pretty productive player, and I think he can have a strong season.

• Also think Dwight McGlothern will be a true impact guy so long as his hamstring isn’t an issue. He tweaked it late in the spring.

Sam said it did not appear to be an ACL that afternoon. They had done an MRI at that point. No one has said what it was they fixed. I’m not comfortable saying exactly what it is but I am not sure when he will be back.

Sanders is among the best athletes to play linebacker at Arkansas. I would say he’s probably not any better than Dirt Winston or Wayne Harris. Yes, I’m old.

… by the Detroit Tigers

I was told Sanders chased down Hornsby on a play.

I was told Sanders chased down Hornsby on a play.

Saw that play; truly stunning to watch it unfold.

I didn’t see it lol.

It was in the spring practice if that’s the one they’re talking about. Hornsby sprinted out and Sanders came up and went stride for stride with him as he tried to outrun to the sideline

He was a beast on the field but not at the pool table.