Some thoughts from the Mississippi State series 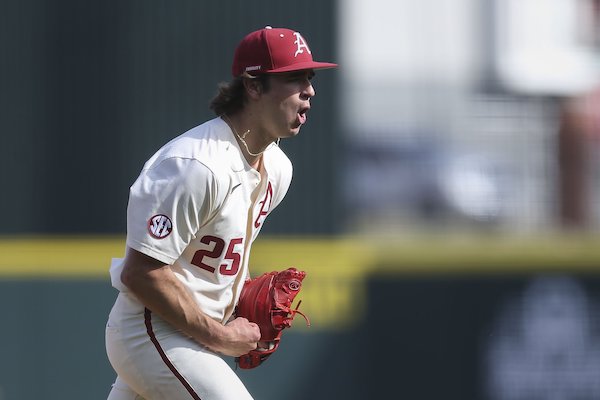 Analysis: Diamond Hogs have plenty to feel good about

The ending was disappointing, but the weekend was encouraging for Arkansas' baseball team at Baum-Walker Stadium.

It will take a lot more lipstick than you find to dress up the Hogs after the way this third game ended. It was there repeatedly, but we did not close the door. Enjoy the gift, leghumpers.

Yesterday’s game was very frustrating because there was absolutely no way in this world we should have lost it. We should be 9-0 because we have totally given away both games that we have lost… hopefully we go on the road and play a whole lot better than we did the last time we went on the road. Thursday game will be very tough because they have the best pitcher we have seen so far and him being LH will be even more demanding… the season’s still young hopefully we will learn from the mistakes that have cost us two games. You absolutely have to take advantage of the opportunities that are giving you if you expect to do well in this conference.

Guys, if a team successfully acomplished their potential they would win every game.
A MLB team would be great to win 100 games out of 162 so a college team is most likely not going to win every game they could.

The Hogs are having a good season and they won a conference series so why are so many fans complaining?

People are complaining and not happy because Mississippi State didn’t beat us we beat ourselves. People are tired of seeing Ramage come in and throw wild pitches Walk and hit people…It’s more about how we lost anything else.if someone just beats you it’s easier to take but when you basically give the game away that’s a totally different thing. I’m extremely happy that we are 7 and 2 in the SEC but there are a lot of more tough series ahead and you hate to give away two games like we have the last two weekends that you might need later on to win the division.

Arkansas didn’t hit with runners on base, but I thought the Razorbacks played an OK game. They pitched well, defended well, bunted as well as I’ve seen in years. Sometimes the other team just makes the better plays. I thought it looked like Mississippi State played with a little more desperation, which is understandable after Arkansas had already won the series.

Arkansas just did not make the winning play in the 8th, 9th and 10th innings to finish the game. Most of the coaching decisions by both teams were sound. Hogs wasted lots of chances.

Ahhhh. Ramage again. Not dependable. Mid week Guy only if that

Razor will, you’ve been on the boards a long time and I can’t ever remember a positive post from you.

Why not try to find something you enjoy?

Rampage makes me nervous but he didn’t cost us the game. We had our chances but couldn’t deliver.

Yeah we just couldn’t put the bat on the ball that time we had bases loaded one out. I kind of thought DVH might safety squeeze with Stovall the 2nd time he was up there with a man on third and one out but he crushed that ball, 1 inch higher and that balls down into the corner and everybody’s dog piling him. Just a frustrating game that we couldn’t come up with something to get that man in from third both of those times.

Ramage was solid, even brilliant, for one inning. But as he has often done, suddenly lost control in the next inning when he hit the 9-hole hitter. That ended up being the winning run. However, I don’t put that loss on Ramage, either. We had too many opportunities to score & failed to do so. All we needed was 1 run to cross the plate in the 9-11th innings & we didn’t do it despite having men on base & in scoring position with less than 2 outs.

I didn’t realize it was that bad. Yep. Lots of failings in yesterday’s outing.

Asking Gregory, one our most clutch hitters, to sacrifice bunt = no AB for Gregory, no AB for Wallace and at this moment in time an out from Stovall. And to do this twice is questionable strategy at best. Without doing this Ramage may not have be needed at all.
There is little more to say for Ramage. I think they should have been grateful for his first inning and gone with someone else the next. But DVH seems desperate to get something out of him I have rarely seen during his time here and I am sorry about that.

I thought the bunt strategy was sound. It put a go-ahead run in scoring position with one out on multiple occasions. As Van Horn said today, Stovall didn’t get the job done in the ninth, but he did in the 11th. The first baseman just made a great play.

Stovall is a very good hitter but right now he’s trying to pull everything. I would have him study kjerstad’s swing/approach try to hit everything to left center and if he’s a little bit out in front it’ll be in the right center field Gap but right now he’s rolling over too many balls.

I have noticed Battles trying to go the other way quite a bit this year he said he’d been working on that hard in the off season because he knows he’s quick enough to pull the ball as we’ve obviously seen 3-4 time. He’s hit a couple of balls if the wind hadn’t been blown in would have been home runs to right field

To hit the 9 hole hitter in the 12th is not good pitching nor good baseball. In the 9th on you must not walk nor hit anybody. If they hit their way on, so be it, but good teams have pitches for those innings that do not allow those either. They certainly do not allow two hits in a row with men in scoring position. When that happens, there is no way it can be claimed to be good pitching. It just is not.

It was 2nd game of dbl header. We did win the first 2 games. Keeping our series win streak alive. Just need to be happy with that.

A perfect pitch can be hit and a bad pitch missed. No picture has ever wanted to hit a batter in the 9th or any other time except intentionally occasionally.Better players usually defeat inferior ones. But not always.