Ladies also won last night. Apparently over 1500 people at the game. I hope the vast majority were Razorback fans. I have no idea if any were.

I know a lot of hog fans from around here that went and they enjoy the short drive to see the game. Most fans around here make it a trip to the hill and stay a few days for football and basketball games! When it comes to baseball they spend the weekend.
True hog fans love everything Razorback!!! WPS!!!

Wonder what the ratio of fans was? Hope hog fans outnumbered them, but I expect a lot of UCA fans showed up when they might not have on other nights because it was the UA. There’s a jealousy & favor the underdog factor that happens when Goliath plays David. I’d rather not cultivate that in this state, but I guess it’s gonna happen whether I like it or not. 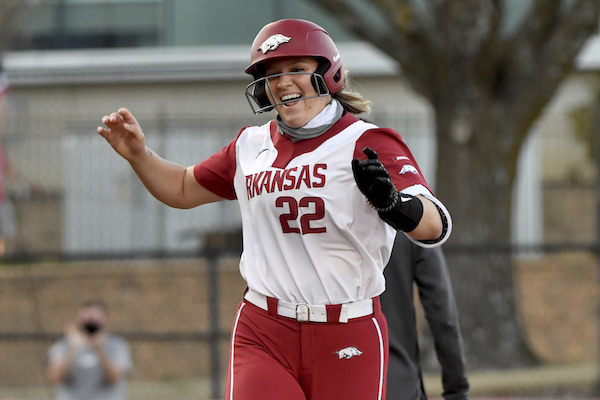 The nerves were evident for Central Arkansas’ Kayla Beavers at the outset.

Yeah. I read the story. Apparently the record attendance was about 1,200, not 1,500. However, the story doesn’t give an estimate of how many in the crowd appeared to be Razorback fans. Any idea?

Not to highjack the original question, but I think I saw three people dressed in purple at the baseball game.

UCA had some players from NWA. Probably family members of one or more.

There was actually a small crowd there for UCA (baseball game)
And a gaggle of young girls who were very vocal, either siblings or girlfriends of the UCA players

I certainly didn’t see them nor hear them. I was surprised.