With the conference title salted away thanks to Bama’s loss to Misery last night, trying to avoid a conference series loss. Aggies took a 2-0 lead in the first on a bomb, Hannah Gammill got one back in the second, Ags got another run on consecutive doubles, but KB Sides just hit a two-run bomb to tie it in the fourth. Aggies changing pitchers now.

It’s 95 degrees with 100 heat index in College Station, by the way. Aggie starter threw 95 pitches in the heat, the last one flying out of the park on Sides’ blast. Mary Haff is in the circle for the Hogs.

Danielle Gibson ripped a two-run homer in the top of the 5th to give the Hogs a 5-3 lead. Aggies changing pitchers again after a single following Gibson’s blast.

Hogs have three homers today and 95 for the season.

Make that four and 96. Linnie Malkin greeted the new pitcher with a two-run oppo taco. 7-3

This has to be the best team we’ve ever had in softball. Congrats on a stellar yr and keep it going!!!

Game 2 recap on the front page: 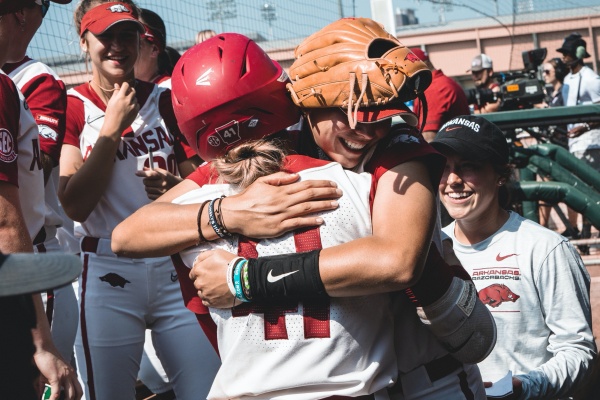 Four Razorbacks hit a home run and Arkansas bounced back to defeat Texas A&M 7-3 on Saturday at Davis Diamond in College Station, Texas.

That team can crush the ball! I love how they swing the bats

What? All 13 teams are in the tournament and we won’t play until Thursday. And the bracket won’t be set until after today’s results.

Yes, Mo is really stroking the ball! They have been on the rise in the last few weeks. They have a lot of momentum coming in to the tournament.
I don’t care for any sports out of Mo. haven’t for a long time. I just hope we crush their tournament win hopes.

That doesn’t make any sense. Missouri is currently 5th in the league. We wouldn’t play them until the semifinal if that holds.

That’s what they had this morning so they must know something we don’t. They are to play SC/Tam winner I think,both are far back from next worst team so today’s results won’t matter but we would play them in 2nd round not 1st as I noted,I was just looking at is our 1st game.

Now that today’s games have been played…

Misery finished seventh at 12-11 with one rainout.

Georgia and the Necks tied for eighth at 12-12. Really doesn’t matter who has the tiebreaker because they’ll play each other Wednesday, The winner of that game plays the Hogs Thursday night. The Misery-Auburn winner plays Bama.