The No. 7 Razorbacks host No. 15 Auburn tonight. 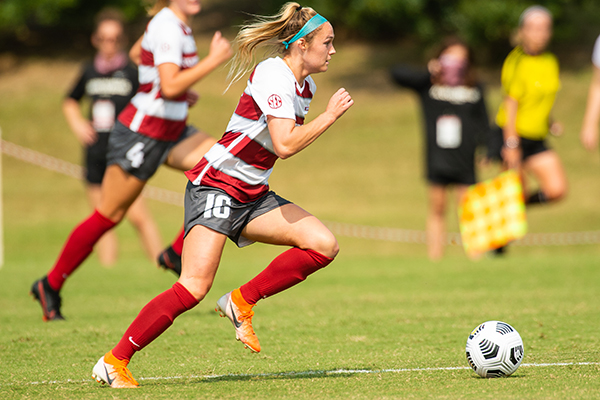 Arkansas’ soccer team will attempt to add a third trophy to the school’s championship haul Friday.

Interestingly enough, Auburn is the only undefeated team in the SEC (true they’ve played two fewer matches than most).

It’s worth noting that if South Carolina were to lose to Mississippi State tonight, Arkansas would clinch at least a share of the SEC title with a victory.

South Carolina is going to be favored to win its final two games, but soccer can produce some unexpected results.

up early and rolling, now 2 goals up and our front 3 are fast and in command. Aubbbie pushed it early and then we took over.

top 15 matchup 3rd time in a row. Aubbie has early enrollee playing goal and Aubbie is a bit offensively challenged. Should be double SEC tournament bye after tonight.

Halftime Hogs up 2-0, goals by Anna Podojil and Parker Goins.

Hogs hold on for 2-1 win and win the division. South Carolina beat Moo U tonight and still holds the tiebreaker for the overall SEC lead.

It’s worth noting that even though South Carolina has the tiebreaker, Arkansas would be considered an SEC champion if both teams finish 7-1. The Gamecocks would just have the higher seed in the tournament.

I hate to belittle the SEC status, but these kids have made winning the conference sort of trivial compared to advancing in nationals. They are that good. How we did not definitely close that game out last night is a mystery to me, we have a nice mix of young and veteran players. I expected Parker Goins to put her foot on the ball and tap in the great pass and I expected Bryana Hunter to get over the ball and put the header into the empty net and seal the deal with a lot of time left. They managed the fight and gutted it out but Auburn got a moral victory rally out of the whole deal. Our talent goes way beyond just the starters and coach did a good job of getting meaningful minutes in for future success.