So it was Scott Edgar and TJ that brought Mason over

Great article by Bob Holt on Co-POY Mason Jones. Bob writes how Hogs were in desperate need of shooters with the departure of Macon, Barford, CJ and Hall, and Scott Edgar recommended Mason to Mike. Mike then sent TJ to evaluate.

The skills of Mason that Edgar described to Mike and other skills that TJ noted resulted in Mike making an offer to Mason. What is more remarkable, Mason is displaying 100% of the skills that those two projected.

Edgar and TJ nailed this one.

Nice to see Mason, under the tutelage of two respectable coaches Anderson and Musselman, has developed into the player that was originally projected. It has been a joy watching him the last two years, grow every game into what he is today. A total package.

It is fascinating to read what ex-Hogs are saying on twitter about Mason and his skills. 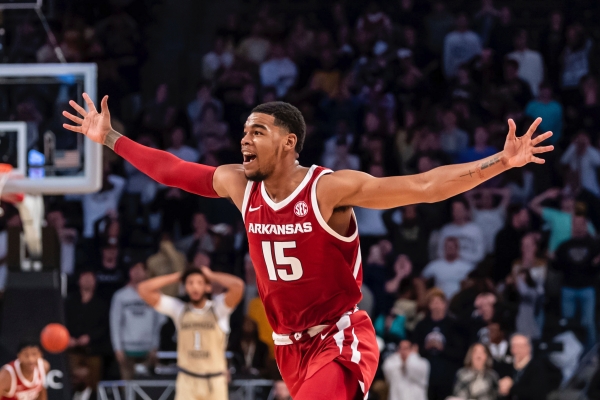 The University of Arkansas basketball program didn't have to beat out any of its SEC rivals in the spring of 2018 to sign Mason Jones out of Connors State Community College in Warner, Okla.

Scott was the best recruiter Nolan ever had on his staff. Unbelievable how he could spot and judge talent some overlooked. If you question what I’m saying just ask Dudley.

I heard he basically lived in Memphis 1985 until leaving for Murray St. We haven’t been successful in Memphis since Marlon Towns of Fairley high left U of A.
Huery, Bowers, Fletcher and Day that led to Beck, Stewart and Martin. Penny was only one that turned us down after initial indications that he was coming. We got Clint McDaniel instead and that turned out great with 1994 title. On that Texas football game weekend, we had Penny Hardaway, Clint McDaniel and sophomore from Russellville Corliss Williamson. As Meatloaf sang, Two Out of Three Aint Bad.
Scott was on Mike’s UAB staff until Bruce Pearl plucked him away to start a great run at Tennessee.