Slavens will be back for 2023. This is obviously a pretty big, unexpected roster piece for next year. 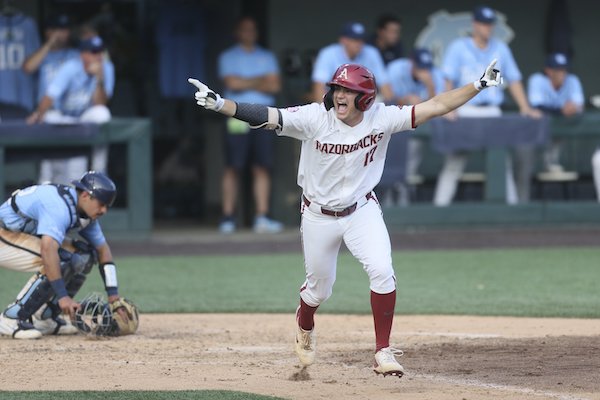 Slavens will return to Diamond Hogs in '23

Arkansas’ baseball program received a jolt Friday when slugger Brady Slavens announced he would return to play the 2023 season for the Razorbacks.

Great to hear this!!!

I wonder if he will be given a position to help him out in the draft. Seems being a DH does not help your draft ability.

They tried that this year with right field. Van Horn told me a couple of times during the fall that scouts thought his best pro position would be as a corner outfielder. In addition to his lack of a defensive position, he was probably hurt as a prospect by his high strikeout rate.

I heard Van Horn mention during one of his pregame shows that Slavens was battling some sort of nagging injury during SEC play, but I never learned more about it. I wondered at the time if that contributed to him being taken out of the field.

That is absolutely huge!! You got to love the kids loyalty.you know he’s disappointed he’s not getting a chance to play pro ball. I would love to see him have a incredible year next year

Yea, it would be great if he can figure out the strikeout problem. If he did cut those down, would MLB draft anyone just for DH? Don’t keep up with it to that detail.

If he can just think hitting the ball the other way it would help him a lot. He really needs to look at Kjerstad a lot because he would learn take the ball out to left field and just let his natural ability to pull the ball just happen. He also needs to learn the strike zone a lot better, has to learn to lay off the high fastball, he gets too anxious. I would love to see him take an opposite field approach into next year I think he would have a great year if he did

More bombs like that centerfield one in Omaha please! That thing was crushed! I agree with Billy…it will help to hit more to oppo field.

How many game did he start at 1st base (at least approximately)?

He played 1st the entire season (until a late season injury) in 2021 and was fine there.

He played a lot of SS prior to coming to UA.

He looked much more comfortable at 1st base than RF, imo.

He started 12 games at first base this year.

In talking to Slavens today, the hope seems to be that he will be the first baseman again next year.

In talking to Slavens today, the hope seems to be that he will be the first baseman again next year.

Do we expect Stovall to play SS, 2nd, or 3rd? Wasn’t he a highly ranked SS in high school?

I think Stovall will play second.

Very very pleasant surprise. Come on back Brady.
The elbow injury could have contributing to some of his batting woes. Don’t see how it couldn’t. Elbow motion or mobility is critical to swinging a bat I would think.
A healthy Slavens is just what the doctored ordered. Pun intended.