Wow, what a blow to Team USA. Nice article about it from ESPN. Not certain yet if she will try to compete in individual all around. 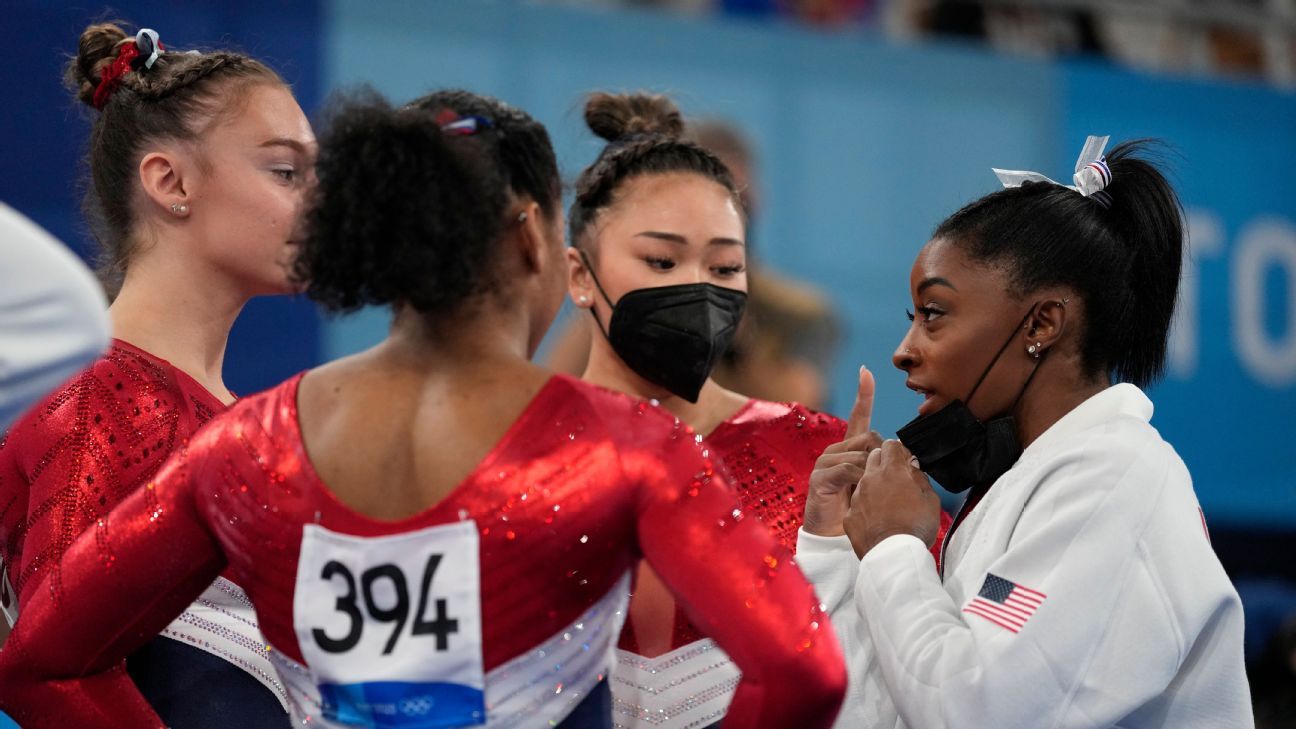 'You have to be 100%': Why Simone Biles withdrew from the team final

Tuesday's news that Simone Biles had withdrawn midway through the gymnastics team final hit hard. But maybe it's the beginning of a new era in which mental health and safety are truly more important than gold medals.

One of the qualities of a GOAT is mental strength. The greatest perform under pressure of expectations to the fullest. That is what separates the greatest from the ordinary.

I am quite surprised Simone is not as mentally strong. Really expected her to be the opposite of that. I kind of thought something like this but not this, was coming after hearing her last interview when she talked about the pressure and how she wakes up thinking about that.

Simone has been through stuff I can’t imagine. Sexually abused by Larry Nassau fueled by USA Gymnastics lack of oversight and control. Now Simone has to work with USA Gymnastics and it’s very difficult for her to forget their part. I’ll give her a pass and a big thank you for being the best of all time. Till you’ve walked in her shoes…

In my weak moment of the disappointment of losing the gold medal, I completely forgot about what Simone has gone through. I feel for her. She came back after being away from competition for a while, just for the Olympics. I agree with everything you said. Thanks Simone for what you have done for USA and USA Gymnastics. Hope you compete in the All-around and apparatus finals. Rooting for you.

This is such a shallow post and I’m disappointed in YOU. Were you criticizing MJ after he stepped away from basketball for a while after his father was murdered? No, I thought not.

But she should have walked away before this competition began, or after it when it was individual.

I know here teammates will support her, but to me she let her team down by doing it during the competition

Simone Biles earned the right to not compete, but when you sign up for a team event it ain’t about you anymore. She wasn’t competing well and she quit. It’s pretty simple.

Decline the invite to Tokyo. Withdraw from the individual competition. But quitting IN THE MIDDLE of the team competition? That’s poor form.

My thoughts exactly
You just said it better than me

Were you criticizing MJ after he stepped away from basketball for a while after his father was murdered?

Did MJ step away at halftime of Game 6 of the NBA finals?

Well I got to be honest ,I didn’t know who she was,had to look it up,never have been too much into watching that flipping and flopping. She obviously was not feeling 100% and didn’t feel like she could give her best effort only way I can figure it.

I have no genuine understanding of the day-to-day of a world class athlete. But I wonder if the better sports analogy might be the yips in baseball. One day a catcher wakes up and can’t throw the ball within ten feet of second base. You can tell him to suck it up, go out there, and sail the ball over the bag until he gets right, but who’s that helping?

Only in this case we’re talking about complex acrobatic routines with a significant risk of injury.

Not saying I’m right or anybody is wrong, just that I think I’m gonna reserve judgment on this one.

ain’t about you anymore

Which is why she withdrew. She knew the team would be better off without her. She was off at the trials but was still better than everyone and thought it was her duty to go. She was in a tough spot.

I’m no psychiatrist and would not pretend to render any diagnosis of her. But child sexual assault victims often have PTSD. Sexual abuse of a child is
devastating. They can repress it for a while but when that ends all sorts of problems can arise. She’s a winner and has nothing to apologize for. Great American athlete. Let’s not bash her.

Did MJ step away at halftime of Game 6 of the NBA finals?

Yea well MJ didn’t have an obligation to play to for all other players who’s dad had been murdered. Simone said that she was done but felt like she needed to do the olympics for all those that have been abused and for those that want to do gymnastics but have fears. Big difference. Big difference. She had a lot of pressure. It’s sucks for her. Her team understands. Why shouldn’t we.

If she had continued she would have lost her team points, and a silver medal.

she had continued she would have lost her team points, and a silver medal.

You are spot on.

I don’t get the tennis player not wanting to do interviews. Didn’t tennis offer to help her in dealing with the press?

Didn’t tennis offer to help her in dealing with the press?

For me, I cannot possibly understand what might have happened to the mental health of a young teenaged girl who was physically and sexually abused by her USA Gymnastics Team Dr. Someone who she should have been able to trust explicitly.

I will never presume to know what or when her mental anxieties might be triggered. She is competing for her country, but more specifically, for the same US Gymnastic Team that did not do a good enough job of protecting her from the man that worked for them.

A few of these posts in this thread are among the most insensitive, that I’ve read on this board. PJ apologized, as he had forgot about all that she had been through. Thanks, PJ. A few others new her situation and still posted insensitive remarks. Pathetic.

don’t get the tennis player not wanting to do interviews. Didn’t tennis offer to help her in dealing with the press?

Naomi Osaka would do it a bit differently if she has to do it again. Instead of going to the French Open committee, she went straight to the press and declared she wasn’t doing anymore pressers after her match. Doing a post match presser is part of the contract between the tournament and WTA that is the organizing body fircwonen players. So, tournaments reacted and threatened to fine her fir each conference she misses. Her issue is that after a loss, reporters ask her tough questions and she cannot handle it and she says it affects her mental health,

On the other hand, all players face that. For example, Serena Williams and Novak Djokovic get tough penetrating questions, win or lose, and they handle it with class.

Eventually WTA offered to help her.