Using a young (freshman) Sidney as a comparison point for Devo - as Clay and I have both done recently - has put Sidney on my brain. I dug up this video clip (thanks WARMACHINE) and watched it a little while ago. I’ll admit that the old eyes got a little moist when Eddie took Sid out late in the game and the Hogwild Band played the theme from “Superman”. 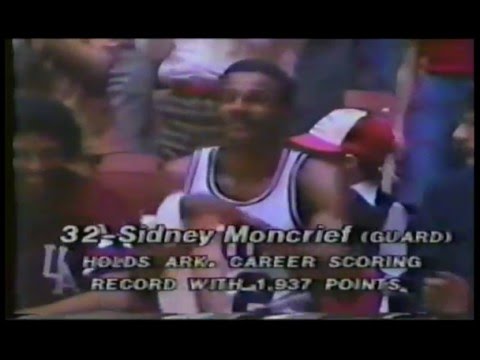 Great memories! We got spoiled in those days.

Don’t know how many times I have seen that clip, but it never gets old. Super Sid was simple the GOAT!

There were so many great things about his game but the one that I always marveled at was his inside offense. He was 6’4", but he could somehow, someway take the ball inside with the trees and then come up over them and score. Amazing. The first time I saw him play was against Tulane at Barton. He came in as a Freshman and got the ball down low and somehow jumped up around and over those bigger guys and scored. Never forget that play. It foretold so many great ones to come.

And Sidney is still a HOG all the way.

Great post. I was at that Tulane game. Was the same day as the famous A&M football game in LR.

I also enjoy seeing Super Sid, loved how he used the backboard in so many instances.

Two things brought chills to my spine watching the video. First seeing Sid get his final home ovation. And second hearing Paul calling the game. I think of Paul every time I drive down I 40 near where he left this world. Two Razorback icons.

I was thinking the same thing when I heard that golden voice. Paul Eels was the real deal.