This was posted about 6-7 weeks ago, so may have been linked here…if so, I didn’t see it.

Our old buddy Pete Fiutak…kinda lost me when he picked St. Johns as our “key player” and Haselwood as our “key transfer”???

Oh well…just something to read in the dog days of summer. 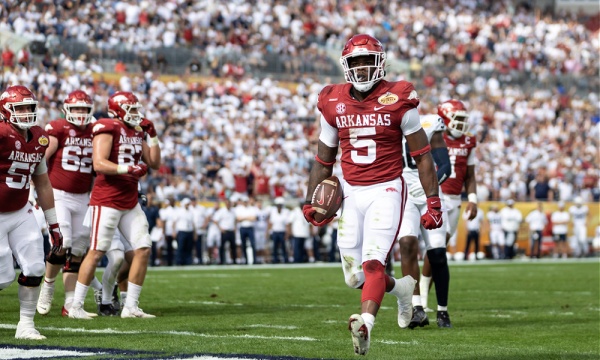 Arkansas College Football Preview 2022: Team breakdown, season prediction, keys to the campaign, and what you need to know

We’ve been waiting on St John’s forever I’d love for him to actually show up and live up to his rating.

Here is a line from the article, I’m hoping it was a typo or else the person writing it doesn’t know didly squat about football defenses.

" The Hogs get as many defensive backs on the field as possible – they’ll often work with a 4-2-6 alignment."

Raise your hand when you see it!!

Unless we’ve suddenly moved to Fayetteville, Ontario… no.

That’s the way to stop the spread. It would work.

I think a 4-2-6 would be extremely effective, lol

Clay your father had a column once about a coach from Arkansas named Smith who was assigned to College Station during World War II and stayed there on many staffs in the years to come including Bear Bryants. He told the story that the staff came in early one morning and Bear was there in the meeting room in the clothes he had worn the day before, unshaven, with many coffee cups and an ash tray full of cigarette butts. There was a lot of formations on the chalk board. Bryant turned to his staff and said “I think I have come up with the perfect defense!”

The staff looked at each other and no one would say a word. Finally Smith said “Coach there’s just one problem. You have 12 men on the field.”

Bryant took one look at the board, threw his chalk down and walked out of the room. No one ever mentioned it again while he was there.

Something happened and it only posted a part of my post and it won’t let me delete it.

@flashman1, I edited your post. For some reason you had a number of spaces at the beginning of each paragraph. I’m not sure how you posted that. I deleted the spaces and it reformatted properly.

You should be able to edit it now.

Well given that this happened at A$M the Bear could be excused. A lot of subliminal messaging on that .campus about a 12th defender.