They speculate that budget issues might cause HY to bail on the Hogs’ road trip to South Bend if the 2020 schedule winds up as conference games plus one NC game, which seems to be a solid possibility. Better to play a rent a win at home and make more money. Does he know what he’s talking about?

I believe that Swarbrick has been an active participant in discussions held among conference commissioners, or so I have read. Since he is the one describing this possibility, it apparently has been the subject of some in depth discussion. Not too sure that ND would be the plus 1 candidate for our 2020 schedule. Thanks for bringing the information.

Yes Swarbrick has been involved in those talks. Yesterday there was an interview on SI.com with several involved parties including Swarbrick and Greg Sankey and the conference plus one NC model was mentioned prominently. 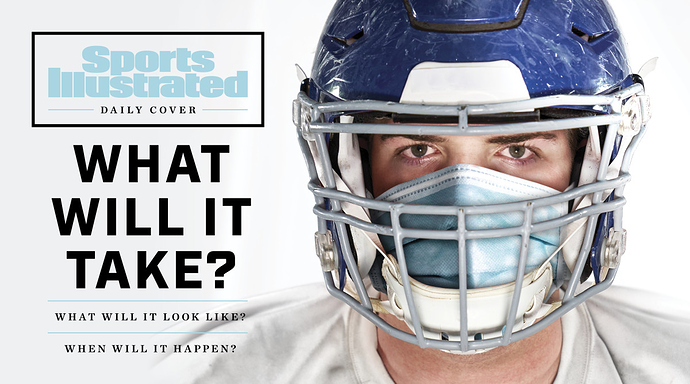 Inside the Conversation Around College Football's Return

SI asked the game's 11 most important decision-makers about the fate of the 2020 season. Their answers suggest everything's still on the table.

Would the Notre Dame game get cut? Probably only if Notre Dame won’t play. Even if we get beat by forty we need that kind of game on the schedule, and if we scuttle the series we will have another year of playing an underwhelming opponent at home in the current ND Fayetteville slot.

The economics thing for non-con home games against cupcakes also gets a little sour if you play with no fans/reduced capacity/low attendance. I’m sure UA will still make money if that happens, but is it enough money to give up the chance to play Notre Dame? Doubtful.

Plus SEC teams, unlike most of the other Power Five conferences, schedule one or more cupcake non-con games later in the year, and this year that could be important attendance-wise.

Well… those November NC games include Florida-Florida State, SoCar-Clemson, Georgia-Georgia Tech, and Kentucky-Louisville. Not exactly cupcake city. For some reason the SEC West went to the cupcakes this year, but we have not previously done that. We’re playing ULM in the spot where we used to play Moo U, and I don’t know why. A&M and LSU didn’t add a November cupcake. Bama and Auburn have done it for a while, and OM added a cupcake this year too.

I do think the people at Nevada have got to be pretty nervous about that Labor Day weekend game. If they don’t play that one that is going to be a big revenue hole for that program.

I think the clauses in game contracts regarding not being able to play games for whatever reason(Act of God, war, etc.) and the liquidated damages clauses in those same contracts are going to be looked over pretty carefully all over the country as each school tries to plan for all the things that might happen in the second half of the year.

I do think the people at Nevada have got to be pretty nervous about that Labor Day weekend game.

Yeah. They have UTEP, South Florida and UC Davis besides us. USF averaged 31,000 home attendance last year. We averaged 51,000 even with a putrid team. (Yes I know we counted unused tickets, but so does everyone else). UTEP and UCD are home games for them.

Force majeure is going to come into play, clearly, just as has happened in recent years for games that were cancelled because of hurricanes in the southeast. As I recall, Miami cancelled its 2017 trip to ASWho because of a hurricane and the Pink Puppies sued.

The fact that this virus is so widespread is something that will make it hard for some teams to go & others not to. If there’s a general consensus that safety concerns means delaying/shortening the season, I think it’s going to be hard for one school to force another one to pay. Perhaps if the liquidated damages clause is low, it won’t matter. This is a unique situation. Normal rules might not apply.

The Notre Dame game has intrigued me as soon as it came onto the schedule. But it intrigues me less now. Travel and sitting in a press box may be tough for me. I will be 66. I don’t figure I’m getting on a commercial air line and flying to Chicago. Of course, we don’t know what is going to happen as far as sports media covering games. Will there be anyone in the press box?