Should JD come off the bench tomorrow?

Given his first half struggles and early foul problems of late, I wonder if Muss is considering this?

IMO he’s starting and starring. He got his penetration game going last night in the second half now he needs to hit some 3’s to get his confidence going.

Yes. We really haven’t found anyone who thrives as a sixth man yet. At times it seemed like devo or Lykes could thrive in the role. But they have came in and laid just as many eggs as they have provided a spark off the bench. Now the one question is have devo or Lykes proven they can be trusted to be the primary ball handler. Up to this point we just havent had anyone we could trust with the starting point guard position other than notae. I say give devo some credit for his March madness performance this year and last year and hand him the reigns with a very short leash. Notae should be coming off the bench at the first sign of shakiness in our guard play offensively or defensively. Notae is clearly overthinking everything because of his foul situation. It’s causing him to get called for more fouls than ever not playing instinctively and messing up his offensive rhythm.

He needs to get to the hole and see the ball go through the net before he jacks up any 3’s! He also needs to figure out what a good 3 too take looks like! He fails to understand time and score and when to take the shot!
The hogs can’t win without him but they can sure get beat with him when he fails to play well.

I think JD needs to start he just has to be a lot more careful driving the ball to the basket and also getting up to tight on defense. A couple of those fouls last night were cheap. We need his offense in the game to start off with IMO.

The hogs need the JD that plays under control! On both ends of the floor.
I would like to see our hogs move the ball on offense.

And penetrate more to get fouls and go to FT line. I think if you go back and look at our winning streak, you will see we had a lot of success of FT line. If you are jacking from 25-feet, much less likely to get fouled and go to the line. Generally, we are not a good 3-pt team.

I’ve suggested this for several weeks now. He was, obviously, very successful in that 6th man role last season, so it’s not as if he doesn’t know how to fit that role. And it keeps him from instantly getting in foul trouble, as he usually does.

I get that he’s got skills no one else on our team does, but they don’t do very much for us if they’re on the bench because he’s fouled out…and we need him at the end of the games.

Another thing, while I’m on this subject. I wish Muss would take both he and Jaylin OUT of the game in the last minute or so of the first half when they have a foul. Sure, they may make a positive play for you if you leave them in at that point; but the risk/reward proposition weights heavily the other way, because if they pick up a foul very late in the half, it can and usually will affect they way we can play them the entire second half.

I was really holding my breath there at the end of the first half when Jaylin drew the charging foul…could have easily have gone the other way and saddled him with a foul that was wasted and useless.

Nor should there be…

Come on now…99% of the time our offense looks horrible when JD is on the bench.

Once again…he’s second in scoring in the sec, first in steals, first team all sec and third team all American and you want him to come off the bench?

He had a bad first half due to picking up two fouls. He comes back and gives Vermont 17 while playing his butt off. He’s a starter!

Arkansas’ numbers on both ends through the SEC Tournament, per Hoop Lens. First and third columns are with JD on the floor: 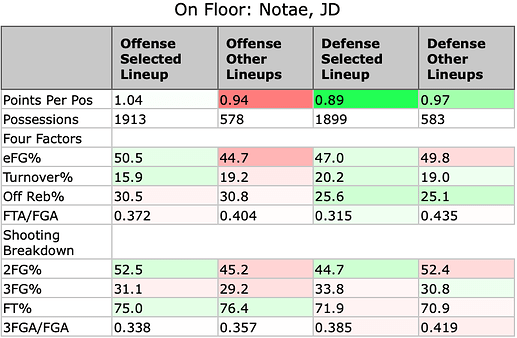 Nope. You don’t sit an All American at this stage.
That experiment should have been tried long before now.

I know it’s hilarious when fans on message boards can so clearly see what needs to be done from a coaching standpoint.

That guy Musselman clearly doesn’t know what he is doing.
He’s out of his depth.
Just rolling the ball out there
Doesn’t have a clue
Needs to read this board!

I mean, come on! Wiz has been telling him what to do, what’s he waiting for???

The only thing coaching wise I wanted to see last night during the first half and second half when Notae went out was a two man game on one side with Devo and Umude. They had no answer for Umude and we went long stretches in both halves where Umude did not touch the ball. I think during Vermont’s 12 point run in the second half Umude never touched the ball.

Yea let’s change up what’s been working all year

I know it’s hilarious when fans on message boards can so clearly see what needs to be done from a coaching standpoint.

That guy Musselman clearly doesn’t know what he is doing.
He’s out of his depth.
Just rolling the ball out there
Doesn’t have a clue
Needs to read this board!

I mean, come on! Wiz has been telling him what to do, what’s he waiting for???

Chill saw-bones. This is a FAN board, and as a fan I’m allowed to express my opinions. Never did I imply that I’m a better coach than Muss. In fact - to be specific - when I was articulating this very view (about taking those two out of the game late in the first half) with my group last night, I added “although I know Muss has forgotten more about real basketball strategy than I’ll ever know”.

Still, I’m allowed to have my thoughts. It’s not as if I just started watching the game, you know. I cut my teeth watching and learning about Basketball from Don Haskin’s very, very good team at Texas Western/UTEP 60 years ago. Way before most Arkansas fans knew (or cared) much about Hoops.

He needs to get to the hole and see the ball go through the net before he jacks up any 3’s!

I’m more concerned about Williams. Offensively, I think he’s started to hang out too much outside of the 3 point line. I think he’s best fighting in the paint.

Can’t imagine Muss benching Notae, even if Don Haskins came to him in a dream.

Am I not allowed to express my opinion?

My opinion is that you have a very thin skin as repeatedly demonstrated should anyone question you.

But that’s just my opinion