Great read on Pat Bradley. He was one of my favorites as a player. Once he got into radio work, I thought he did a real good job with Acri. It’s really nice to see his career take off. Once again, great read!

Clay wrote it. It’s on the front page. 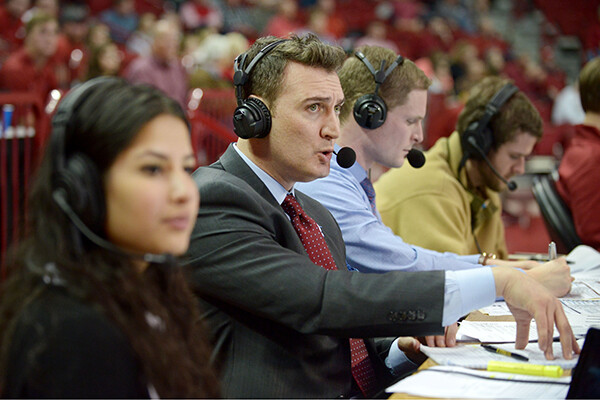 There was a time that Pat Bradley’s shooting stroke was responsible for so many smiles across Razorback Nation.

Wonderful piece. Pat does a great job on the air and represents the Hogs with class. And obviously a great son and brother.

Love the nickname Shootah. I wonder if Bradley has been called that for years, or if Dari gets credit?

I laugh every time I see/hear the phrase “shooting god”.

Sat behind the plate once at Fenway and heard plenty of Southie dialects and a couple of Brahmin dialects. (Was told the Sox were wicked good that year). But “get ya cold beeuh” was certainly the most common phrase I heard that day.

Nice article on Pat. Clay you are doing some of your best work in these days.

Great insights from a knowledgeable player on Coach Muss. Muss is the real deal . Hope he can be part of Arkansas for as long as he wants. I dare say his son will be good coach too if the phrase is true that apple does not fall far from tree.

His Little Rock radio cohort has been calling him the Shootah for years.

Sat behind the plate once at Fenway and heard plenty of Southie dialects and a couple of Brahmin dialects.

My one game at Fenway was behind the visiting bullpen in right field. But running the Boston Marathon twice, both years with a Razorback-themed shirt, I heard plenty of “Go Ahkansah! Go Haahgs!” from the people along the course.

My lone trip to Fenway was over 20 years ago. Manny Ramirez was in left and Pedro Martinez was pitching for the Red Sox. They were playing Baltimore and none of the Red Sox fans seemed to care (probably because they won 16-2 plus most seemed fairly drunk). The fans spent the entire game chanting obscene things about the Yankee’s. Manny hit two homers and had a fly ball drop right in front of him (he lost it in the sun). In the 7th inning stretch the group of college kids right in front of us got extra loud (they were loud before this). I looked up and one of the girls was flashing the crowd. We were stunned. And probably in the picture her boyfriend was taking. I’ve been to Philly baseball games and they are crazy in their own way. But not as crazy as Boston.

I’m biased because he’s one of my all-time favorite players, but I love him on the broadcasts. I think he’s great. I watch some of these other guys on the bigger ESPN shows and think he’s way better than a lot of them.

I’m hoping ESPN will eventually promote him to a bigger role not limited to SEC Network.