Probably was seeing the writing on the wall at UT. 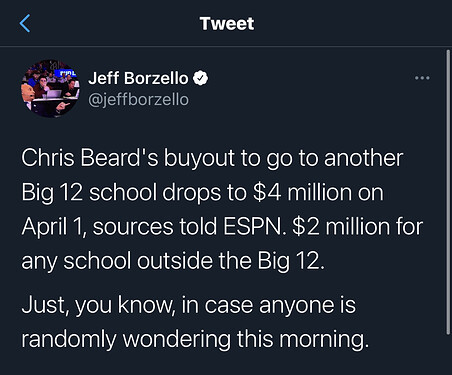 A couple of years ago when Sampson at UH & Beard at TT were discussed as possibly our next coach, it was understood that Beard would remain in Texas, most likely at his ut alma mater.

However, IU has Beard on their short list of candidates.

That is a smart move by Coach Smart.

That is a smart move by Coach Smart.

There may be a bidding war for Chris Beard between Texas and IU. We’ll see who wants him more.

IU alum paid $10 million to rid themselves of Archie so they were serious about a change. They have 3 good candidates with IU ties so that may be their direction. Hopeful Muss is not also in the mix.

Smart knew his days were numbered. Beard will likely land at ut with his ties to TX & to ut. However, with their weak BB following at ut & their stadium downsize, seems ut would be a hard sell to land a top coach. Had wondered if TT & IU might bid on Knight - if he was younger.

I will just be gobsmacked is Muss leaves Arkansas for anyone right now. Could be wrong of course. But I would be really, really shocked.

They have 3 good candidates with IU ties

Beard worked for Bobby and Pat Knight at TTech. That’s all the IU ties he needs.

However, with their weak BB following at ut & their stadium downsize, seems ut would be a hard sell to land a top coach.

I think you’re going to see a lot of basketball teams downsize their arena capacities, including Arkansas at Bud Walton Arena. The demand for tickets is not what it used to be, so the empty space is being repurposed for club and suite areas, for which there is great demand.

Kentucky, Florida and Tennessee have already done it to existing arenas, and Auburn did it when it built its new arena about 10 years ago, and that’s just in the SEC. Assembly Hall at Indiana had its capacity scaled back slightly during its most recent renovation.

Assume most of the downsizing is at the Southern schools, primarily SEC & Big12 while the Big10 schools seem to have bigger crowds. As expected KY, usually sells out & approx. 1k seats larger than BWA. Expect SEC & ESPN tv coverage of games is the source of lower attendance. That is disappointing since BB with Sutton live at Barnhill was loud & exciting with rabid UofA fans back in my college days at UofA.

IU by far has the strongest fan base in Big10 (by ticket sales), per consistently selling out 17.2k, win or lose. IU initially planned to demolish AH & build a larger stadium but remodeled due to cost. They have focused on not overly commercializing the games which has added to the fan experience.

Interested to see the BWA attendance this Fall without the pandemic & with high expectations after Muss success with basketball.

I have not heard Muss’s name mentioned by any talking head on TV or on Twitter regarding the Indiana job. However a lot have mentioned Beard and Muss in that order for the UT job.

I’ve seen several website stories listing Muss as an IU candidate. So much so that Danyelle addressed it the other day on the radio. 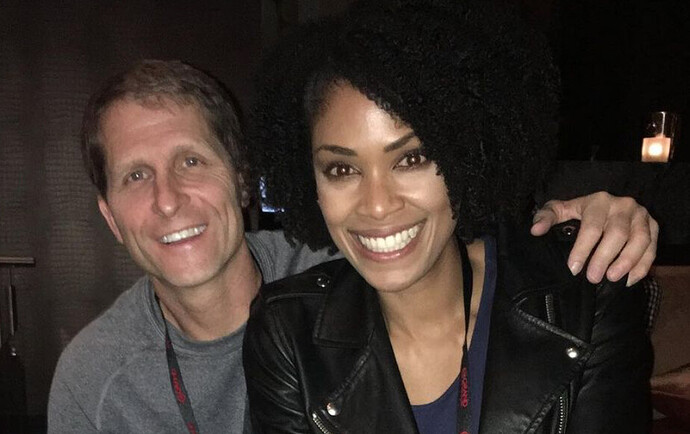 As the Indiana basketball coach search drags on, it looks increasingly likely that a Sweet 16 coach is being targeted.

The IU AD is doing a good job of avoiding leaks so far.

By the way, when Justin harassed Kyler Edwards into missing that layup at the end of the game Sunday, it put $250,000 in Muss’ pocket as a Sweet 16 bonus.

Maybe that’s why he jumped on the scorers table!!!

Maybe that’s why he jumped on the scorers table!!!

I’d jump on something if somebody gave me $250K!

By the way, when Justin harassed Kyler Edwards into missing that layup at the end of the game Sunday, it put $250,000 in Muss’ pocket as a Sweet 16 bonus.

I also thought on the previous attempted layup by TT, Arkansas got a payback call for the sequence of bad calls against the Hogs in the closing minutes of the 2017 2nd round against UNC

But he’s about to get a helluva lot more than a $500K raise anyway,

Wasn’t UT was suppose to build a new arena? The Drum is way too old. The concourse is the width of Barton Coliseum.

Wasn’t UT was suppose to build a new arena?

Moody Center is a new world- class arena in the Live Music Capital of the World - Austin Texas. Moody Center will host the biggest artists and acts in the music industry and is also the home of the University of Texas women's and men's basketball...

Dudley? I figure you would know. 2 years ago, Beard would have been our coach had he not made it to Final Four? Supposedly, we couldn’t keep waiting. I’m hoping we leave Indiana the same way this weekend. Would love to see UIC and Us make the Final 4 and watch Hoosiers squirm