Any ideas? This is based of course on the ruling that all players can get an additional year of eligibility due to Covid-19.

On the Women’s team, Chelsea is gone. Obviously. I suspect Destiny is too…but if I were her I would consider coming back to be “the leader” for a season (and yes, I understand Jersey is on the way!). I wouldn’t be surprised if Amber came back either…but she can probably make decent money in Europe. Taylah might get passed on the depth chart anyway…though we would welcome her back. I bet Jailyn comes back. Hope she does.

On the Men’s side, Tate and Smith can obviously make money in Europe. I don’t think either has a real chance to be drafted. Both could make a roster though. Anyone think they might actually return? If they both came back, we could be really strong next year. I think both have developed under Muss. Maybe they decide to indeed continue that development. Moody will be sorely missed…but we can minimize that if Tate and Smith return for year. As for Vance, I would be stunned into silence if he chose to come back.

What do y’all think?

Of course if we win the Natty, everyone just might ride off into the sunset. Don’t scoff! There is a chance!

I’m not an expert or have any inside information but i think there’s a better chance to see players return on the Womens team!
CEM was asked that question in the last week or so and he indicated that hasn’t been asked but when the season is over he will talk to the players and check it out.

Only a guess, but I think of those you mentioned only Smith and Tate would have the opportunity to actually return. Pretty sure Coach wouldn’t mind figuring out scholarship distributions for the 2021-22 team if both of those guys wanted to return.

How far of a run the Hogs make in the NCAAT might factor into this decision, but I think it’s very unlikely either of those will be back, regardless.

Moody is the one most of us hope would return (for reasons different than the point made in your post). Of course, that likelihood is probably less than the odds of Smith and/or Tate returning.

So, replacing those 3 next year will be the challenge that Coach will face, as he proves he is worthy of his (likely) new long-term contract.

If Smith continues to play the way he has these last 4 or 5 games, he may just hear his name called in the early to middle part of the 2nd round of the NBA draft. If so, he should probably go because as a 5th year senior next season, he’s not likely to improve on that even if he improves his game some. I would love for him to come back though!

Pretty sure Coach wouldn’t mind figuring out scholarship distributions for the 2021-22 team if both of those guys wanted to return.

Scholarship distributions don’t matter. If Smith and Tate come back, their scholies don’t count against the limit, so we could have 15 for one year. The extra money to have 15 on at one time would be a problem at, say, ASWho, but not an issue for us.

I can’t see Smith coming back, his game is good enough to either make good money overseas or perhaps try for the NBA.

Tate might be a different story. He might like the chance to work on his game at this level for another year. Then again he may have had all the college hoops he wants.

Does the fact that all these players have been honored on senior night mean anything? Possibly that they indicated to their respective coaches that they will not be back? Is it due to COVID that they could even be able to come back?

Does the fact that all these players have been honored on senior night mean anything?

Nope. Mike Neighbors told his seniors that they’re welcome to come back, but if they do they’re not getting another framed jersey next year. One per customer. Muss hasn’t talked to his seniors about whether they want to come back, or so he says.

Hi Jeff. Welcome to the board. Yes, per the NCAA, this season will not count against any player’s eligibility, because of the inconsistent amount of games various programs were able to play due to Covid.

Smith is a terrific player. That said, he is rather short fo play the 4 in the NBA…but he lacks the shooting and skill offensively to play the 3. He can GUARD the 3. Maybe even the 4 at times. Its where to play him on offense. Further developing his face-up offensive skills and a reliable jumper might be a reason to return.

But probably not! Like we all said, there is money to be made overseas if not in the states.

I actually think Tate will find ultimately find a place in the NBA. As a reserve. Someone that long that can guard your 1, 2 and even your 3 for bursts is a commodity.

That is very interesting! I could see Amber coming back for the women, maybe Slocum. Probably not Mason, too many amazing recruits coming in, unless she comes back as a GA. Same with Thomas.

All I here from the talking heads is that Moses is gone after this year. Any chance they are wrong and he returns?

I’m not an NBA draftnik, but every mock draft I’ve seen has Moody in the top dozen. I would be very surprised if he comes back with that kind of grade. The 12th draft pick last year signed a $17 million contract, with almost half of that guaranteed. That’s a lot of cash to turn down.

Swine, you make a compelling case!

As much as I miss the old days where players stayed 4 years or at least 3, there is no way Moody is here next year. I wish the rules were different (and I understand the arguments on both sides) but with the current rules, it would not be smart for him to come back. 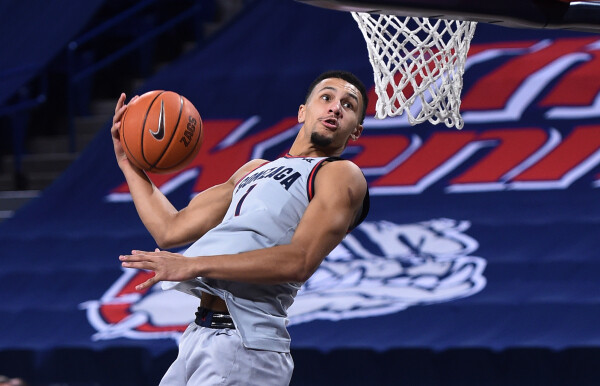 Which future NBA players will be playing during March Madness? Who have been the best players on the inaugural G League Ignite squad?

Well, its like Swine said…returning seniors don’t count against the scholarship limit. So I could see Mason coming back. I actually think she’d get plenty of minutes. Its easy to forget that before Mason was injured she had three good to very good seasons here. She’s 18th all-time in assists and 12th all-time in made 3’s. I would want her on my team…

I think we would all love to see Moody come back. But why? I have to admit its because I want my team (the Hogs) to be good. Maybe win-the-Natty good if Tate and Smith also returned.

And as a college prof, I certainly value a college education.

But turn down something in the neighborhood of 17 million? Just thinking about how I could secure my family’s situation…including aunts, cousins etc with 17 million…I know what I would do.

And while the argument can be made he could come back and get that kind of money the following year…there are two words that at least somewhat dampen that argument: Marcus Lattimore.

Does anyone know if Tate, Smith and Jackson are on course to graduate this year? Believe that will play a role in their decision.

Uh, PJ, they’ve all already graduated. That’s why they’re here; they’re grad transfers. Do they have their master’s yet? I’m pretty sure none do.