SECN analysts on expectations for Arkansas

Three guys on the SEC Now set this morning said they have high expectations for the Razorbacks this season: 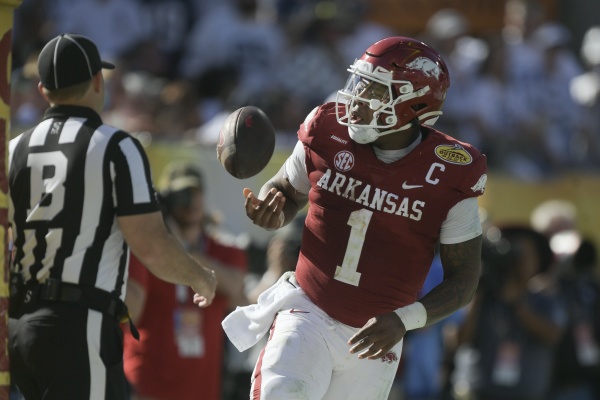 Expectations are high for Arkansas after a strong push in the final months of the 2021 season.

I think the offense is good to go. Defense is my question. They kind of said the same thing with more reservations at receiver than I have.

If the defense is decent, 10 wins is absolutely doable.

I have big concerns about stopping the Run, don’t see a big NG that you need to demand a double team to make a three-man front good. Drew Sanders is going to make a big difference to this defense but I don’t see three difference makers up front and that is going to make it very hard hard to stop the run I’m afraid. We are bringing in talent to the secondary but they don’t know the scheme, how long it takes them to learn it will determine how great the defense is.

I know it’s been said before but it is a concern we have to find someone to take Burks space in this offense. I think Knox has a good year. I think Hazelwood will have a great year, I love Satenga and I think Hornsby can be a weapon if we will play him enough to where when he comes in the game they will not automatically know we’re going to him.

The schedule is really worse than last year. Great things are possible, but the team could be better and win fewer games. It helps that generally we are still an afterthought, which keeps the chip on our shoulder, and that recruiting/transfer portal keeps improving the talent level.

Hard to predict schedule difficulty sometimes. Especially preseason. Lots of things can happen leading up to game week. But, to me, I like our conference schedule better this year than last year.

Consensus had Arkansas 6.5 wins and finishing 2nd or third behind Bama. At 6.5 wins ,that is not likely. Best to view as they are not sure how much faith to put in hogs yet with Burks gone and the non conference schedule plus regular SEC West is difficult. They do favor Hogs over TAM,but also favor LSU behind Bama in west. Like us fans they do not know either.

Ya opening with Cincinnati and South Carolina? Tough start…