SEC will use TrackMan to evaluate SEC umpires 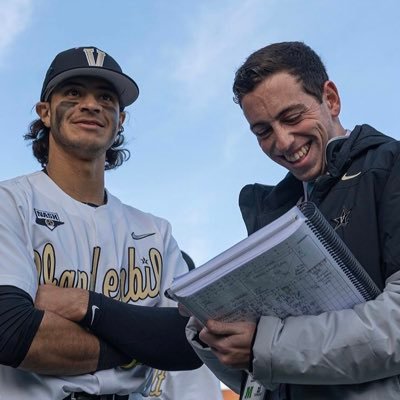 @MaxHerzTalks
Just sent out to the SEC baseball media list, the SEC will be evaluating umpires’ ball and strike calls in conference games this season using trackman https://t.co/NmgfjgTo1d 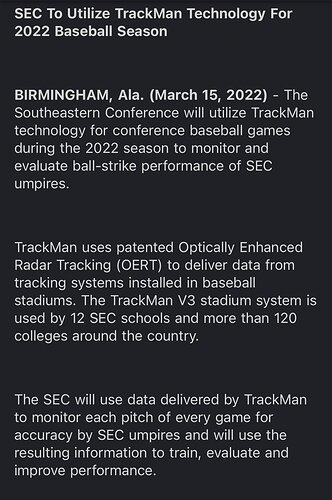 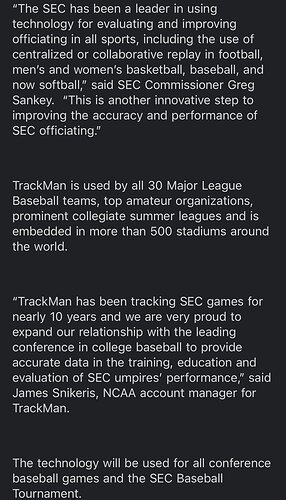 That’s that’s a great idea. Hold them accountable I hope.

Phil and Bubba had a long discussion about this last night. (BTW, if you aren’t listening to them do games, you are missing out.) Bubba has access to the Tracman statistics during the game. He can give exit velocity, etc. It’s fascinating.

I am 100% onboard with tracking an Ump and using that to evaluate him. But if that evaluation over a long period shows poor performance and nothing is done, then what the hell is the point. Force them into some kind of extra training or send them packing. Sorta like they use to do (or maybe still do with a driver’s license) Get so many points you are on probation any more and you are suspended until you complete a drivers training course to remove some points or you just lose your license for a certain period of time.

Now where I draw the line is the use of trackman to ever be use in live game situations to call balls and strikes for the Ump. That technology is available right now and would not be hard to implement and I’ve seen people talking about that as a good idea. It will fundamentally alter a position of the game and destroy a vital skillset for the catcher. How many great catchers are able to steal a strike on a close pitch. I thinks that a huge factor and great part of the game. I’d hate to see that destroyed.

I love the chemistry between Phil and Bubba

Bubba refers to Phil as his second wife.

I love that idea. I don’t think I’d like to see a fully computerized strike zone–there’s something of the human element I like–but I would like the humans to be as accurate as possible.

Bubba and I talked about the umpire/TrackMan dynamic today on our podcast. That will be online a little later.

Thats great,
Why did they wait 10 years to start evaluating umps if they been tracking SEC games that long? Take that long to get systems in every stadium ?

I never listen to the tv broadcast. I always listen to Phill and Bubba! They do a great job!!
It gets a little aggravating at times because the radio broadcast isn’t always in sync with the stream, (sometimes the other way around), but it’s worth it too listen too them call the game.

Get the blind men some feed back so they can see what we all see.

Why did they wait 10 years to start evaluating umps if they been tracking SEC games that long? Take that long to get systems in every stadium ?

Some of the SEC teams were in on TrackMan much earlier than others. In fact, two teams — no one will tell me which ones — still don’t have a TrackMan system in their stadium.

The TrackMan data that has been collected to this point has been by the teams and used for internal purposes. So Arkansas has a feel that the average strike zone has dropped by about 2 inches since it first collected data.

Now all of the teams that have TrackMan will collaborate and send their data to the SEC for analysis.

Thanks Matt for that info.
Strange that 2 “secret” teams still don’t have it when it obviously produces very beneficial information.