Regardless of the result of Florida-Tennessee game, LSU and Missouri should end up in our half of the draw and Florida, Tennessee and Kentucky should be in Alabama’s half.

I think Florida and Tennessee are more talented and dangerous than LSU and Missouri. And Kentucky usually does well at SECT. I like this draw. What do you think?

Edit: if Florida wins, Tennessee ends up in our half. Tennessee better win and they are wining right now.

Disagree about the talent assessment

LSU is maybe the most talented team in the SEC

They just play like a bunch of street ballers

Believe this is it. Purports to be updated after today’s game. 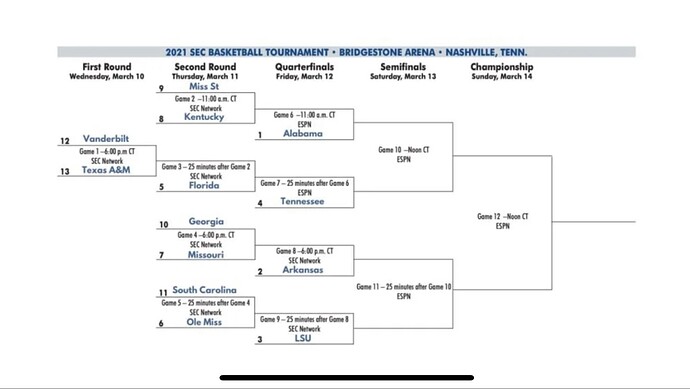 Tennessee won so that’s the correct bracket. We get Georgia-Misery winner. Florida had the chance at the double bye and whiffed it.

Love another shot at Tennessee in the final…

Well it looks like the hogs are waiting on a rematch. I don’t know which one I really want to see win. Either one should be a good game. I’m just proud Ole Miss is down to maybe end up playing LSU if they beat S Carolina.
The street ballers from LSU already received their pay checks so they don’t care about wining and it shows on the court. Who ever plays LSU I hope they beat them!
As long as J. Williams is available and able to play I think our hogs can win the first 2 games.

Missouri is a bad match up for us. Having Justin Smith will help, but we saw yesterday what a strong man in the post can do to us, even with Smith on the floor (No. 5 for the Aggies manhandled Tate in the paint). I think we’re better than both Misery and Georgia, but Georgia would be a better match up for us.

we saw yesterday what a strong man in the post can do to us,

Tate is going to get manhandled by anyone in the post because he’s a skinny guard. We didn’t have Jaylin. We will on Friday.

I hope Williams will be back. That would make me feel better about playing Missouri.

If we play Missouri in the rubber game, looks like both teams will be at full strength, unlike the first two games,

The key will be how the game is called. Missouri fouls a lot. I think they foul more than anyone in college basketball. The goal for them is to hit every player on every inch they move. When it’s called, you end up shooting a lot of free throws. I thought they fouled a lot the first time in Fayetteville and it was not called.

So much of their fouls were hip checks on drives. They don’t just hold their ground, they bump into you to knock you off balance. They will not last long in the NCAA tournament because they will get those called against them. I assume they will beat Georgia, but there have been a few times that Georgia has shot well.

Georgia plays an offensive scheme that suggests they want to shoot threes, but they don’t often shoot them well.

Missouri is foul prone. Their three point shooting is also inconsistent. We have a quickness advantage against all their guards but Pinson.

Is it confirmed that Williams will be back Friday? If not, Mizzou could be a real problem down low for us.

I think Missouri will have a tough time getting past Georgia. It is a bad matchup for them.

Who ever wins the Thursday game will have tired legs! The old jump shot and 3 ball may come up short. I like our chances against either one of them. Oh course years ago I liked our chances against a short handed Georgia team that won the whole darn thing! Show up and play and hope our hogs win!
Man it’s nice to be in a position where we are suppose to win.