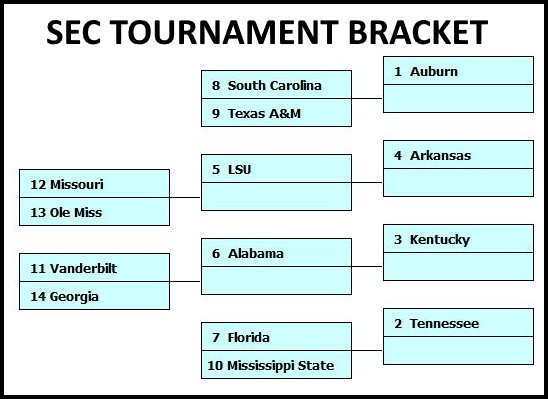 Now this may not even be right… looking at the SEC website they show in the standing as TAM is the 6th and BAMA fell to 7th. So at this point I really got no clue… too much of a log jamb for 5-10

This may be a bit pre-mature as the Texas A&M vs Mississippi State game may cause those 2 teams to flip flop, but I am not sure.

I think the tiebreaker is that Alabama beat Tennessee in their only meeting (in December!) and LSU split with the Vols. The A&M/MSU game will decide who finishes ninth and who finishes 10th.

I like our pairing better than other top 4 teams.

Seems this bracket is inaccurate.

Seems this bracket is inaccurate.

I took it straight from the SEC NOW Tv Show. With Dari, Pat and the Florida guy whose name I can never remember. Granted the graphic is mine, I created it, but the data is from the SEC Network show.

I sure hope this is correct because if I’m honest, I don’t want anything to do with another LSU matchup. I’d much prefer to get Alabama on a neutral court to get a bit of revenge for that 1 point loss earlier in the year. And I also wouldn’t mind another shot at Auburn. Both games would help Arkansas much more than an LSU slugfest.

Yes. I know. I’m just confused as to why they show the order 5-9 the way they do, since the SEC website describes the tie breaker rules like I showed. First tiebreaker is head to head. Second tie breaker is record against Auburn. Since LSU has best head to head percentage compared to the other 4, seems like they are the 5.

I so hope that Alabama is the 5 seed. I want to play them Friday. But it seems LSU is the 5.

The bracket I saw during the A&M/MSU game had LSU as the 5 seed if A&M won. Aggies up double figures with 8 minutes left.

If MSU comes back and wins, Alabama will be the 5 and LSU the 6.

then with half a minute left, I’m rooting for MSU to make up 3 pt deficit, and win the game. 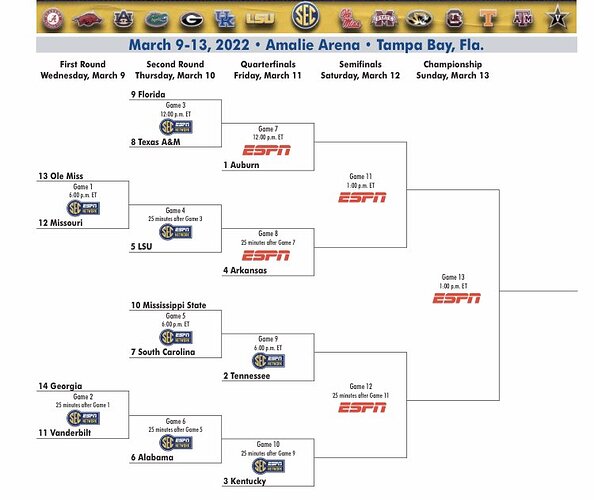 If I’m Muss, with this draw, I’m just resting guys. Nothing to gain. Bama and LSU beat themselves right out of a long tourney run last year by going to war in the SEC Final. Trust me. Brady Slavens agrees.

There are always upsets in the SEC tourney. Some teams just don’t take it seriously if they are already assured of their Big Dance seed. Plus, talented teams with mediocre head coaches like LSU are ripe for upset. So, I am predicting LSU loses its first game, that A&M gets hot and upsets Auburn, we beat a hot but tired A&M, and we end up playing Kentucky for the SEC championship. Jaylin plays better this time and we beat the Wildcats for the SEC tourney championship. JMVVVVVVVHO

Hard to beat a team 3 times in a year. LSU needs the wins.

I am saying LSU lays an egg before they can play us and we get whoever upsets them.

Not gonna happen. LSU needs to beat us. I don’t know whether they will or won’t, but it shouldn’t matter to us either way. We’ve already beaten them twice. Nothing left to prove. I just want to stay healthy for the games that truly matter.

Why does LSU need to beat us?? They have been a “lock” for the NCAAT for 2 months. Losing to us for a third time won’t matter in their seeding. I suppose they could improve their seeding by winning the SECT, or even making the finals…… but most any team can say that.

I am honestly tired of debating this point. LSU is going to throw everything at us. We’ve already beaten them twice. I don’t care if we beat them a third time. We just need to stay healthy. I would love to beat them again, but it really doesn’t matter.

I saw that you mentioned the SWC tourney and Barnhill South in another thread. I was there for all of that, and it was awesome, but we were the big dogs (by a lot) when we left the SWC. Dallas was just gravy for us then.

I know a lot of you want to win the SECT, but what would you be willing to sacrifice for a Final 4? 3 wins in 3 days is too much for THIS team if we want to have anything left for the only tournament that matters. I’m done arguing my point. Go Hogs!

I know a lot of you want to win the SECT, but what would you be willing to sacrifice for a Final 4? 3 wins in 3 days is too much for THIS team if we want to have anything left for the only tournament that matters. I’m done arguing my point. Go Hogs!

It’s not necessary to argue this point. It’s just a fact. We have the correct view! LOL