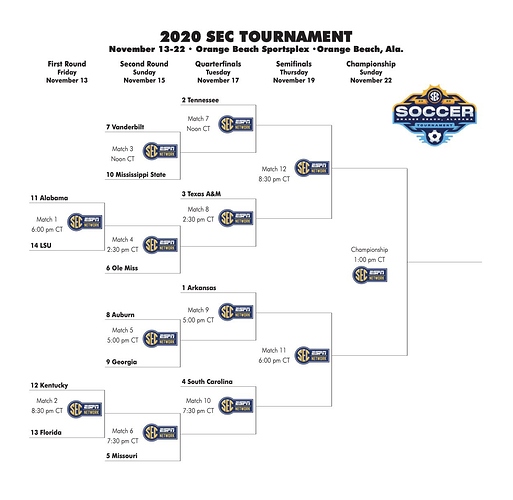 • Texas A&M tied Arkansas for the SEC championship, but is the No. 3 seed because of the odd way the SEC seeds for the soccer tournament. The division champions are guaranteed the top two spots, so Arkansas (by virtue of a head-to-head tiebreaker vs. Texas A&M) is the No. 1 seed and Tennessee is the No. 2 seed.

• South Carolina finished 6-2 and Tennessee was 4-3-1, but the Vols are the SEC East champion because of the way the SEC determines division champions, which is to only count their record vs. divisional teams. South Carolina’s two losses were against teams from the East, while Tennessee went 4-1-1.

• Of the teams it might face in the quarterfinals, Arkansas defeated Kentucky 4-1 and Auburn 2-1 this season, and did not play Florida or Georgia.

• Arkansas has been in the championship game four consecutive seasons but has not won the tournament.

That’s a bit of a bad draw because we’d get the Poultry in the semis and SoCar seems to have our number, usually by parking the bus and hitting us on the counter. In that way, it would have been better if SC had beaten EOE and kept the #1 seed. But if we’re gonna win this thing we probably have to beat SoCar sometime.

Remember Arkansas beat South Carolina in the tournament semifinals a few years ago. I think Arkansas has the better team this year. The game in Fayetteville included a fluke goal and an offsides goal that wasn’t called.

Remember Arkansas beat South Carolina in the tournament semifinals a few years ago. I think Arkansas has the better team this year. The game in Fayetteville included a fluke goal and an offsides goal that wasn’t called.

There will be a little revenge for Arkansas against South Carolina. I like that matchup actually.

no way it was offsides Matt, that started in our end and we chased all the way downfield… You also need to learn Gulf steering currents, your observation of hurricanes and storms driftin west if based on which side of the Mississippi canyon the storm enters the Gulf. The clockwise stream of the Mexican current that turns into the Gulfstream is well recognized by all of us whomever worked in the Gulf. I was at Grand Tere which is east of Grand Isle and learned my hurricane watching with a purpose. Gainesville is safe, but our forward turned the ball over and chased the goal scorer all the way down the field like a rec player. Our history with the Poultry is suspect. We could benefit by getting the game out of the way early. Our freshmen are better than their freshmen and neither knows the prior matchup history well enough to be influenced. I think Hogs win and I may make the Sunday final if my daughter feels like going along.

I haven’t worked in the Gulf and I don’t pretend to be a forecaster. I posted that my observation had been several of the other storms in the Gulf this year drifted toward the western edge of the early cones. I also posted the next day’s National Hurricane Center model that had the storm drifting further west than its projection the day before. Less than 24 hours later the NHC’s own forecast had changed drastically. The first photo was the projection from 9 a.m. yesterday; the second from 6 a.m. today. 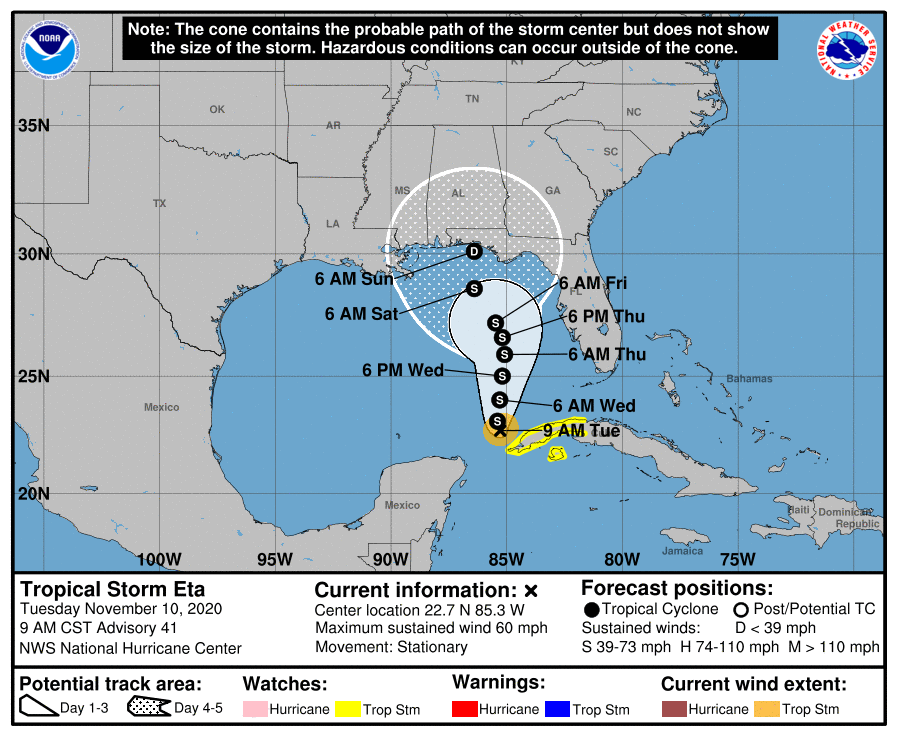 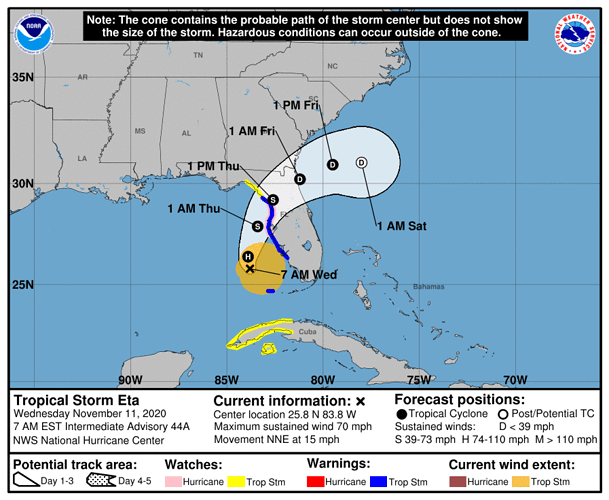 As for the offside goal, that is based on my viewing of the play and discussions with people who know the game, whose opinions I trust. It was close, but I think it was offside. The camera angle was not good enough to say definitively.

I know SC won, give them credit for that, but we just looked better (again, from someone who doesn’t know much about soccer)

That’s typically been what happens with them. We dominate play but can’t score and they get a scrappy goal or two. The soccer term for it is “against the run of play,” which is kinda like the other team drives to your 5-yard-line and then you get a pick-six. The Poultry get something against the run of play on us.

Evidently the tournament winner will go into the NCAA field next April as the SEC automatic bid, which is really weird, but a lot of things about 2020-21 sports are very weird. I assume there will (?) be some kind of spring schedule before that happens.

I think there will be some sort of spring season leading into the NCAA Tournament. I do not think the expectation is for teams to not play for five months, then play a postseason game their first time out.

I never saw a replay of that South Carolina goal that gave me a clear idea of where the Arkansas right back was when the pass was delivered. It was extremely close. I think the Arkansas side thought it was offside. The angle of the TV camera doesn’t show enough to make me comfortable saying it was a good goal or offside. Too close. The right back could have stepped sooner and taken away doubt – or tracked back when she realized the numbers were off. If you are going to attack like this team attacks, there will be a counter now and then allowed to a good team and Carolina is a good team.

I will not criticize that attacking mode because it’s much more fun to watch.

I will not criticize that attacking mode because it’s much more fun to watch.

Agree wholeheartedly. The pro sides I like to watch, including Arsenal, play an aggressive style instead of parking the bus. I’m glad Colby plays the same way.