Agreed - people in East Arkansas will miss the Ole Miss game being an annual affair.

Years ago the ole miss game was big. i believe in the 1960’s a referee allowed a missed field to be kicked again. Ole miss won the game on that field goal. I am not sure who said it maybe Frank or Henry Said the score was arkansas 7 ole miss 7 Referees 3.

I do remember the referee’s name was BELL.

Clay Henry may have more details on that game.

My Uncle Bill was there and talked about it until Dementia took away his memory.

The referee was Tommy Bell.

Frank Broyles was reprimanded by the SWC office for his comments after the game. Lots of details on that game here: 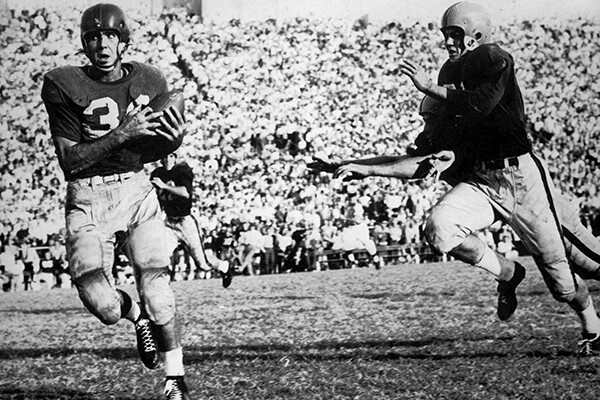 Rock on the clock

There has been one tie in Arkansas' football series against Ole Miss, but the way the Razorbacks and their fans figure it, there should be two.

Matt Thank you very much for your story. I got some details correct. People in Little Rock were very upset over that game.

If I were putting odds on the three teams Arkansas would most likely play on a permanent basis, I would place the best on Texas, Texas A&M and Missouri.

But I would not be surprised if Oklahoma, LSU or Ole Miss were permanent opponents.

who do you think Oklahoma would have as permanent

who do you think Oklahoma would have as permanent

If they don’t have us, I would guess Texass, Misery and A&M.

There are numerous pairs I think will happen that may determine the others. There are several in the East but I am not going to list them because they won’t effect us. OU-Texas, LSU-Ole Miss, Ole Miss-Mis. St. and probably Texas-A&M. If that is “probable” then LSU/Ole Miss/Miss St, and OU/Texas/A&M would make sense. I can see us in either of those groupings. The question will be Mizzu and does the SEC break up Texas/OU/A&M? Does LSU want Bama or Auburn as both are also rivals for them or would they rather have Ole Miss/Mis St/ Mizzu. This is going to be interesting.

I’d guess Texas and Missouri, for sure. Oklahoma and Missouri played almost every year for almost 100 years before Mizzou joined the SEC.

They will surely have the tea sippers as a permanent opponent. That game has been going on for years, long before they played in the same conference.

Matt what is your best guess when we see the pairings released?

They would probably get one and the other would get Ole Pi$$/Mistake/LSU depending on if LSU wants either Auburn or Alabama.

I would take either but Ole Miss/Mis St/LSU would give us our best chance to win.

Living in Austin I obviously want to be with UT.

I don’t know what the timing will be. There is no rush because Texas and Oklahoma aren’t coming to the league for a few more years.

It is going to be discussed at the spring meetings in Destin in a couple of weeks. If those talks are productive, I could see where an announcement might come in time for SEC Football Media Days in July. But I could also see it being 2023 before we know for sure.

I wish we could get rid of Mizzou as a permanent rival.

Me too. They just don’t fit anywhere. Don’t stick them with us.

If we do not have divisions we still may need to align schools in west and the east in order to
make the 3-6-6 scheduling work easier. When you think about the scheduling in would be very difficult.

It will be interesting to see how everything goes, but I’m a big fan of the 3-6-6.

There are several teams with 2 long time rivals, and this format preserves those.

And the fact that you will still play everyone else in the conference 2 times over a 4 year period means those teams that may get easier rivals will likely get a tougher draw out of the other six league games.

Ironically, one team that I can think of that could now have annual games with it’s 3 biggest historical rivals. That would be a certain newcomer that would play OU, A&M, and the Hogs if this sets up the way it should.

We’ll see if the supposed agreement with A&M that they wouldn’t be matched with TX holds up. If so, maybe the league matches them with Bama as punishment for not wanting to play along.