Something is likely to come out of the spring meetings, anyway. 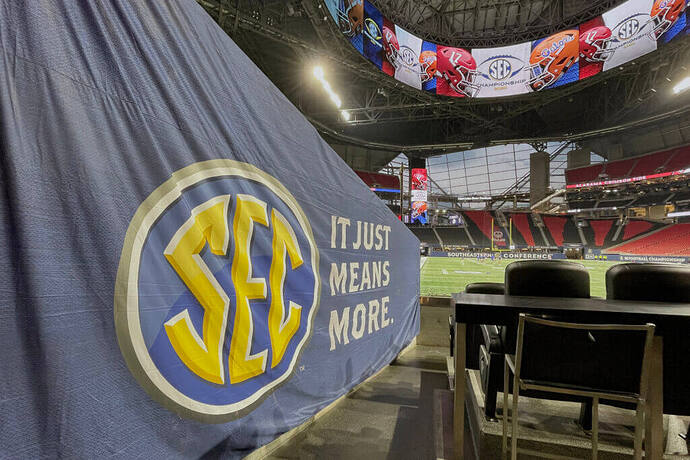 Breaking down the SEC's options for future football schedules

With Oklahoma and Texas on their way, the SEC hopes to finalize future scheduling changes at conference meetings in a couple of weeks.

Nine games are likely because it lets conference teams (and players) play each other, and gives the fans a better schedule.

Even with nine games, divisions would only let you see two teams from the other division per year, and if one of those is a permanent rival such as Misery, it would take 14 years (still) to rotate through the other seven home and home. That’s why divisions are toast. They don’t like that Georgia has never been to College Station, and we haven’t been to Vandy since Petrino, etc. I’m sure there are other examples of teams who haven’t played in a long time.

Pods could form de facto divisions to determine the SECCG teams, and would rotate: Pod A and Pod B would be together one year, Pod A and Pod C the next, etc. But this seems unlikely. It’s also not clear if that would dictate scheduling: would Pod A teams play their own pod and everyone in Pod B the first year, for instance?

What does seem likely is the permanent rival format, but the question is how many PRs, three or four? They showed examples for each team; our three PRs might be Misery, Texass and the Flopnecks; while four PRs might be those three plus the Aggies (personally I’d rather play LSU than the Aggies, especially now that it looks like JerryWorld is going away). They gave OU a Big 12 group of Texass, A&M and Misery, with South Carolina (?) added for the four-PR format. Texas gets the same Big 12 group plus us. Misery might have Vandy plus us and the Red River schools.

Tiebreakers in the PR/pod setup wouldn’t be drastically different.

If you go three permanent opponents then you can play home/home with the other twelve over a four year period. That’s the easy part to get every body playing each other more often. The hard part is figuring out how to determine who plays in the conference championship game.

I think that abandoning divisions and pods and just taking the teams with the two best conference records works better, with the following tie-breakers: 1) head to head; 2) record against a common opponent which finishes with more wins (If Bama finishes 8-1 and the Hogs and Georgia finish 7-2, if both played Bama and only the Hogs won, the Hogs become the second team in the championship game)…

4)same as the third tie-breaker, but you keep going down the standings by wins for each common opponent(s).

In the unlikely event you still don’t have a second team, then 5) winning percentage for FBS non-conference opponents.

I think that 3 permanent and 6 rotated makes the most sense 3-6-6. with tie breakers for the best two. I just wonder who will be our 3 permanent?

I just wonder who will be our 3 permanent?

From what Greg Sankey has been saying, they’re asking the schools who they want to play and trying to match those. I’m guessing we’ll remain with Misery. My guess for the other two would be Texas and A&M, but it could also be Mobilehoma or Ole Miss or LSU.

I wish we could get rid of Mizzou as a permanent rival. That game does less than nothing for me. I would like to see LSU, Ole Miss, and either Texass or the Paperclips. JMO.

I wish we could get rid of Mizzou as a permanent rival. That game does less than nothing for me. I would like to see LSU, Ole Miss, and either Texass or the Paperclips. JMO.

I get what you;'re saying…Mizzou does nothing for me; win, and we were supposed to (although they’ve had our number since they moved to the SEC) - lose and…no bueno.

But stepping back from it. as tough as the SEC is every year, you DON’T want to be paired with 3 upper-half SEC teams EVERY year. So assuming we’ll draw 2 from Texas, OU or A&M, the other needs to be a “lower tier” team, which I believe Mizzou will be most years. In theory, Mizzou, Vandy and either S. Carolina or Kentucky would historically be the best (most likely to win) to play every season, but (a) that would never happen; and (b) that’s just too dull.

My personal preference - and I’ve been consistent in proposing this since I introduced the concept of the “3 and me” NON-pods to this forum last year - is for Texas, OU and Mizzou to be our perm games.

I agree with Wiz. If we’re going with 3 permanent opponents, I want 1 to be a relatively weak school. Besides, MU is closer to us geographically than any other SEC until OU joins. Then OU & MU are the two closest. As far as rivalries go, MU can become one quickly enough. The only reason they’re not one now is that most of us don’t really respect their program & our history with them is short.

I consider tu a lower tier team with an upper tier ego, so playing another lower tier would be fine with me.

I imagine Texas will give A&M a run for their mon$y once they are wearing the SEC logo.

I must admit it is rather fun seeing Aggies be the dominant school in texass.

Speaking of scheduling possibilities, The Athletic had another piece today which basically said “don’t overthink the schedule,” directed largely at the B1G and us. But it did contain a list of games that must or should be prioritized. None of our games were considered critical, a la Alabama-Auburn or Georgia-Florida, but several were listed as worth “strong discussion” – UA-Texass, UA-Misery, UA-OU and UA-LSU. UA-Flopnecks was listed as “worth considering.”

UA-TAM? Nowhere to be seen.

Going to be very interesting going forward kind of looking forward to it. Change is good sometimes

I’m wondering if Wiz might not be spot on with his PR/pod prediction. Zero U, EOE and Misery. Very interesting to see what comes out of Destin in a few weeks.

I think that MO. and OK. will be two of the permanent teams. But who will be the third?

I think that MO. and OK. will be two of the permanent teams. But who will be the third?

If geographical proximity is an issue, both OU & MU would be two of our permanent ones. No other SEC school is very close to us. The next closest would be OM. After that, I’m not sure it matters much, but UT, TAMU, LSU, MSU, Vandy are closer than remaining SEC schools.

I would like to see Ole Miss as the third. I would be ok with Tx, TAM or Lsu

I think an Arkansas-Texas game will be permanent.

OK my guess is MO, OK and TEXAS