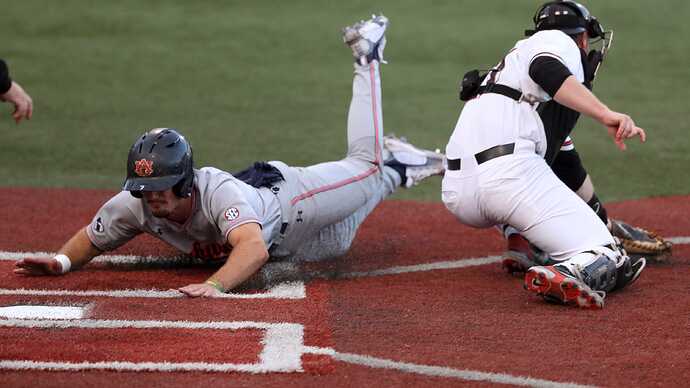 How Auburn baseball tightrope-walked to 7-5 win over Oregon State in super...

Auburn baseball was in dire territory after Oregon State's four-run first inning. Then the bullpen saved the day in super regional Game 1. Here's how.

SEC was 5-0 on Saturday. Aggies already going to Omaha. We might have 62% of the field.

The SEC has won their share of games so far in the post season. I can’t stand Oregon State or Auburn! The hope bad weather keeps them sitting eating to play for 3 or 4 extra days.
The only team in the SEC I’m concerned with is our hogs! 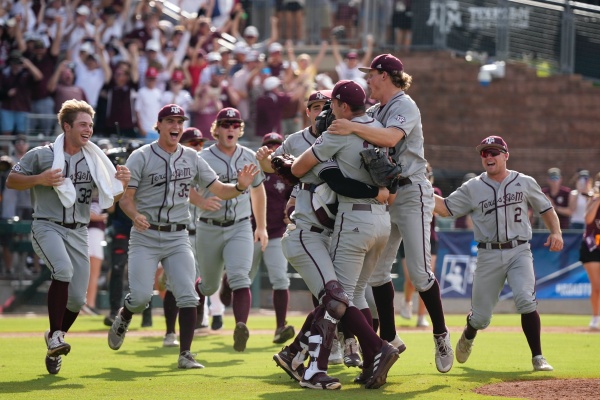 Super regional roundup: Aggies on to Omaha, Vols bounce back

A rundown of Saturday's super regional games around the country.

I hear ya Army. I used to like seeing a lot of SEC teams in Omaha. That’s all well and good until an SEC team not named Arkansas wins the dadgum thing. Like last year with Miss Steak! And as bad as that was, seeing Ole Miss, Aubrun or Tennessee win it this year, would be even worse!

I’d be surprised if it happens this way, but the College World Series could be five SEC teams plus Oklahoma and Texas — an early look at Hoover 2026. All seven teams are one win away.

I’m right with you! The only SEC team I want to see in Omaha is our hogs. The hogs play those teams enough.

Honestly since thesec started getting huuuge tv contacts from espn and sharing the income from postseason appearances became less of a big deal, I just can’t make myself cheer for the sec anymore. I mean, why? I like to cheer for the underdog but when are we able to say the sec team is an underdog in the postseason in any sport? Sec is the dynasty these days and I would just rather cheer against them if it’s not the hogs pretty much every time

I’d be surprised if it happens this way, but the College World Series could be five SEC teams plus Oklahoma and Texas

They’ve intentionally/unintentionally done that over the past several years. I think the difference this year is they sent several SEC teams on the road versus holding and we’ve all managed to get to the supers

I’ve never thought the NCAA intentionally tried to match up SEC teams in the supers. In most instances, those matchups have been the result of a 2 or 3 seed upsetting a regional host. That’s what happened with Arkansas-South Carolina and Mississippi State-Vanderbilt in 2018, and LSU-Tennessee last year.

The better the SEC is, the more credit the Hogs get when they win.

I remember when the SWC went to pieces in football back in ancient times; we were thrilled the Texas teams were no longer any good, it was all Arkansas.

Then Hogs would be undefeated well into the season and not even in the top 10 rankings.

The best conference in the land is a good thing for the Hogs. It’s a little short-sighted to hope the rest of the conference loses while only Arkansas wins.

Maybe it’s a Southern thing, but unless it’s one of the Texases, I would much rather an SEC brother win it all than some school from a foreign conference.

I’m a little like Clay, slightly ambivalent. But when push comes to shove, I want one of us to win.

That being said, except for A&M and Texas. I have no use for Texas.

It’s bad enough ole miss made it, please not texass.