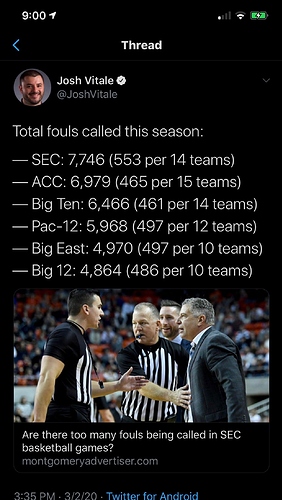 Yeah they are pathetic!

Not a shocker there.

Do SEC refs also work games in other conferences?

Yes I’ve seen refs calling games from multiple conferences. The BiG 10 games I’ve watched let it turn into wrestling at times but at the end of games they go nuts blowing the whistle.

I would like to see non conference vs conference games numbers of fouls called.

If I’m not mistaken, there
is no such thing as exclusive SEC Basketball Refs. They all call multiple conferences.

It’s the SEC, It Just Means (they call) More!

Yes…the officials are not conclusively with one conference. They work across multiple conferences…

If you knew how incredibly difficult it is to get to this level of officiating you’d know how difficult of a job it is.

EVERY call is scrutinized now and they are scored off of film and that determines getting to move up.

Calling these guys terrible is naive to say the least.

How about inconsistent then.

Well the officiating in the Missouri road game and South Carolina road games was marginal at best.

The fact that the job is difficult in no way explains the disparity in the number of fouls called per game.

I don’t think anyone could argue with a straight face that the SEC games have more fouls because the players and coaches are not good enough to avoid fouling. I do think that the refs are impacted by what the director of officiating and league office say about how the game should be called.

I also think that when this little stats nugget makes its way around the conference’s coaches, it will become a topic of conversation at the next conference meeting in the off-season

Ref’s that call game in the dance are suppose to be the best! Go back and look at our game against North Carolina and explain to me how the refs did their job?
Tonight LSU was called for their football tactics why wasn’t the fouls called in Baton Rouge earlier in the year?
It may be a rough job but be consistent and fair?
It’s obvious refs in all sports give the blue bloods most of the breaks.
The same can be thought how they give T’s!

That’s what I’m preaching, just be consistent or at least close to it.