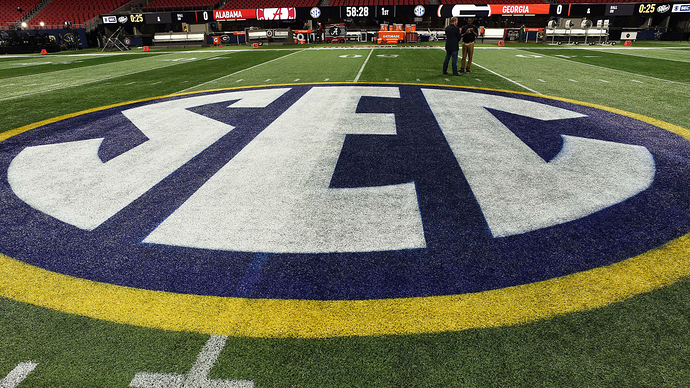 The Southeastern Conference has summoned all 14 athletic directors to league offices in Birmingham, Ala., next Monday to discuss its fall sports schedule.

I’m thinking their first step will be to follow the BIG & limit the schedule to conf games, maybe starting no earlier than mid-Sept, but I’d still bet even money right now the season gets cancelled at some point.

I saw a story on a Notre Dame site today with what will happen to their schedule if the Pac-12 also goes conference games only (Irish play Wisky, Stanford and USCw). It speculated that the ACC would schedule two or three more games against ND as part of their semi-membership. Didn’t say a word about playing Arkansas. Of course if we go conference-only too it won’t matter.

I think it’s significant that this meeting is in person and not a Zoom meeting. It’s kind of like they’re saying “if we’re expecting these young men to practice and play against each other, we need to see how we feel sitting together in the same room first”.

Those of you who visit here frequently know that I’ve expected that we would not be able to play this fall for more than 3 months. Sadly, this is playing out pretty much as expected. And -NO - I get NO joy from that. I’d GLADLY be WRONG about this and have football. I will miss it terribly. But it is what it is. Compared to the cards my father and his generation were dealt in 1940, I’ve got it very, very easy. Time to man up and power through this adversity. We will get past it, and football (and basketball…and baseball) will be played again before very long, in the big scheme of things.

As someone much wiser than I once put it, “This too shall pass”.

One of the rules of this board is to keep politics off of it!

My theory is that the conference mandated OOC game cancellation just gives schools a way out of contracts and is only a pre-cursor to outright season cancellation.

Ha Ha. Not much else to talk about

Just reminding you of the rules Clay would be all over you if he wasn’t on vacation!

Expect to see Fall football & other sports postponed by the SEC to the Spring semester. Otherwise all games for Fall played without fans.

That might help to keep college campuses isolated & open this Fall, give more time for a vaccine, & enable Fall sports to still be played during the current school year.

Yep look for a proposed postponement on football season. Then the next meeting in coming months will be a decision on basketball.

Reasons for a conference only schedule:

More uniform testing. Who knows if Nevada will test like SEC schools do, or if Charleston Southern might cut some corners to make sure they collect that rent-a-win check. You don’t want your opponent to come in and undo all you’ve done to protect your team and staff.

Crowning a champion. If you’re not sure you can get in 12 games, and no one is, play games that allow you to determine a conference or division winner. I read that the Big Ten may move division games to September and October to get them played before a fall virus surge. Ohio State-Michigan in September? Maybe. If we can only play six games, make them SEC West games.

And yeah to cut travel costs. Our only NC road trip is South Bend but that’s unusually far for us (713 miles by road). Athens, Columbia and Gainesville are farther than that but we don’t go there often either.

It can cut some travel costs for some teams. But assuming an SEC-only schedule, Georgia, Florida and South Carolina would be losing a game against in-state opponents that are a short drive away, but still playing an in-division game against Missouri that is hundreds or thousands of miles away.

This is true. Conference only would hit the East; four of them have the in-state NC rivals (UK and Louisville).

i reread the tread and did not see any politics, at least up to the time that was posted?

I deleted the political comments and will continue to do so.

Not a bad theory.

I don’t think any such pretext is needed. It’s not like every school in the country doesn’t know what’s going on. Games get cancelled already for hurricanes or floods or even thunderstorms.

I think making games count is the major motive here. If you can only play part of a season, play games that will decide a champion. Everyone’s schedule gets harder this way but you have to plan for a partial season and hope you can at least play that many.

Don’t you know, the virus doesn’t travel to conference games, only non-cons, lol. A conference only schedule allows the league to make the stops/starts they may be required.

I don’t think any such pretext is needed. It’s not like every school in the country doesn’t know what’s going on. Games get cancelled already for hurricanes or floods or even thunderstorms.

I think making games count is the major motive here. If you can only play part of a season, play games that will decide a champion. Everyone’s schedule gets harder this way but you have to plan for a partial season and hope you can at least play that many.

You could be right as well, but you can bet the farm that unless the season is cancelled altogether, those rent-a-win teams are gonna be howling (pun intended) for their money. It won’t matter to them that the paying school is losing several times the payout on lost ticket sales. I hope all the contracts are written in such a way that elimination of OOC games requires no payout under a reduced-game season.