Knowing Scott Faldon and his work, this does not really surprise me. He must have had that ready to paste to twitter. He not only pasted this about a minute after Briles was announced, he followed up with an article talking about Baylor and how no one was really exonerated.

Something tells me Faldon is not a Briles fan. 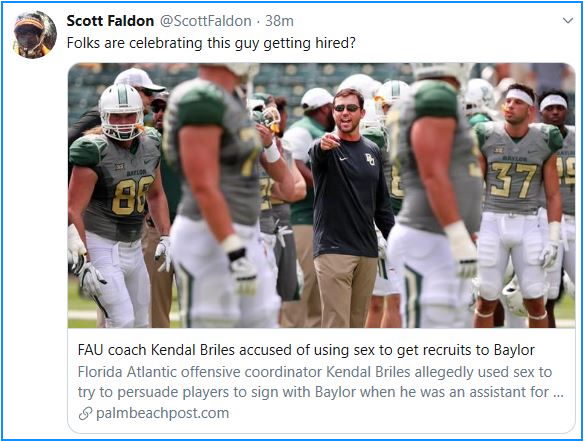 Who is Scott Falcon?

Idk who that is and don’t care about his opinion at all.

Faldon isn’t even media any more. He works in PR for a fishing lure company.

Faldon isn’t even media any more. He works in PR for a fishing lure company.

I know Swine, I was just about to post this.

Scott Faldon is a Ex-sportswriter and columnist covering the Razorbacks who is now retired from the newspaper business.

Has Briles been proven to have committed serious NCAA violations ? No

Has been proven to have committing crimes at Baylor? No

Am I tired of seeing Arkansas get their ##### kicked up between their shoulder blades? Yes

This ain’t church boys and girls… time to get after it or join CUSA.

Jackson…church is just a meeting place for sinners.

LD…true , but some folks in this state seem to think it’s only a place for those with the ability to cast the first stone.

Also a to worship God! And I like the hire!