Watched the news conference and was very impressed with the new coach. I am no Texas fan, but if he gets the right support, it will be good for us as he will hurt the progress of Aggies and will become a factor in the Big 12. He is very smart, very articulate, and knows how to build a winning program. He is much more impressive than Hermann.

There is little question Steve Sarkisian can coach. What we don’t know is whether or not he can repair the damage at Texas with boosters, players, high school coaches and handle all of the media relation duties with ESPN/Longhorn Network, etc. It is a massive job. No one has done it well of late.

The fact that he is going to call plays and runs the offense adds to the massive undertaking. I wouldn’t want him if he wasn’t calling plays. He’s good.

High school coaches have been locked outside of the program of late. The alumni feel like the players snubbed them with the fall out on the history of The Eyes of Texas.

Sarkisian may be capable of handling all of this and righting the ship at Texas. But I won’t be surprised if there are struggles. I don’t wish bad on him as a person, but I guess you all know that I’m not pulling for him. It’s Texas.

Ditto to that Clay!!

Excellent points, there’s too much meddling at Texas by the boosters and too easy to recruit against them.
The Eyes of Texas thing will always be used against them in recruiting.

Texas is a great job. One of the best. College football is better when Texas is good. Texas should be a powerhouse. AD and coaching malpractice if they are not. I like Sark; QB and offensive genius. But he’s got to get the players that Bama, Aggies and OU are pulling out of Texas. Field a tough, physical defense and run the football behind a physical OL. And he’s got to tend to the alums like Mack did. Mack was a perfect coach for Texas. Agree, Clay. Doing all that and calling plays will be a chore.

First, I want to beat Texas next year! I also want them to improve and knock off OU regularly. I hate OU. I hate Texas too but there needs to be another good team in the Big12. I also want A&M taken down a notch.

ut has always been a challenge to coach despite their talent. Perhaps too much booster meddling or too high expectations or the challenges of finding a coach who can manage & develop a team of 4* & 5* prima donna players who as of late have underachieved.

Have enjoyed the muted ut alumni base here in TX over the past few years. Nothing against Sark, but not ready for ut to find success & having to hear about it.

Don’t know how Sark handled the prima donas at USC. Maybe he had control of that there. But If anything else, he would have taken a page from the Saban coaching book in regard to that area.
Now with the UT alums and admin that’s a whole different story. Assuming the UT AD has his back.

has plenty of Saban coaches following him to EOE-A, but that just delight Saban who keeps the turnover short and full of really high quality replacement.

" On top of five Alabama players announcing their intentions to enter the 2021 NFL Draft, there was the annual raiding of the Crimson Tide coaching staff. Mac Jones, Patrick Surtain II, Jaylen Waddle, Christian Barmore and Dylan Moses said their goodbyes, and former offensive coordinator Steve Sarkisian is nabbing offensive line coach Kyle Flood and special teams/tight ends coach Jeff Banks on his way out the door to Texas, according to The Athletic’s Bruce Feldman. And there’s at least one report that Alabama defensive coordinator Pete Golding is in consideration for the Longhorns’ top defensive job." 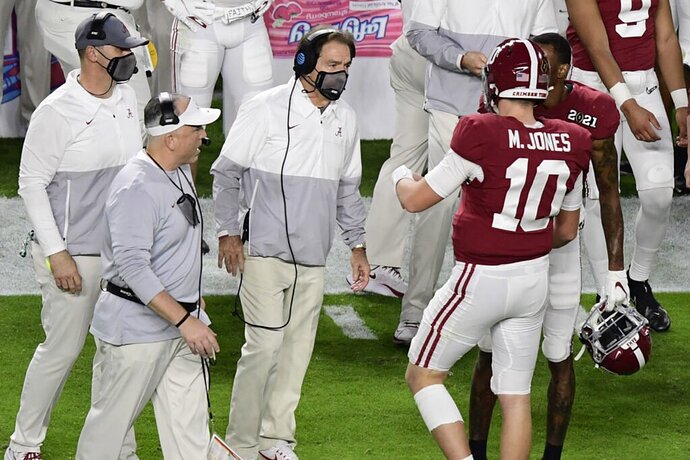 Five players declared for the NFL Draft on Thursday, including Mac Jones, while the coaching staff is undergoing significant changes.

Begrudgingly, the more I watch Saban the more I realize he is the best hands down no arguements. I truly am amazed that so many former HC’s line up to be on his staff.

Now it’s presumed that Bill OBrian (former Penn St & Houston Texans HC) will be Sabans new OC after recent dismissal by the Texans. He spent the entire NC week in Tuscaloosa.
He will have the healing hands of ole Nick placed upon him to resurrect his career I guess. For sure Nick knows how to reload his staff with the best. Same as he does with players.

O’Brien would be formidable. Wow.