When Texas and OU join the SEC. Which could happen in 2024 but probably not 2023. They would need to give at least 10 months notice to get a schedule done, similar to what Misery did in 2011.

Eight vs nine SEC games are much less certain. But divisions and pods have largely been rejected. They want to get every team in every stadium much more frequently. 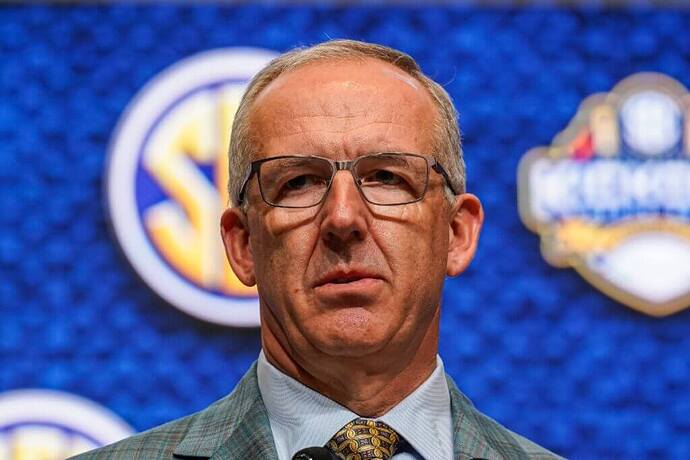 COLLEGE STATION, Texas — SEC commissioner Greg Sankey said Saturday that discussions of the league’s future format are focused on a single division rather than multiple divisions. Sankey, who spoke to reporters at halftime of No. 13 Miami and No. 24...

They want to get every team in every stadium much more frequently.

I sure think a 9 game schedule will help that in a big way, esp when the inevitable happens and we go to 18-20. Once it becomes “the big 2 conferences” the B1G and SEC should change names to “North” and “South”.

I think we’ll end up with nine games, but Sankey has been careful not to put his thumb on the scale, at least in public.

I think we will get a 6-3-3 schedule, that way over the course of 4 years you play everyone twice and visit every home and away stadium. Plus it leaves a bit more flexibility for those rival style games that every wants to keep.

Yeah… that’s what I meant… working on less than 3 hours sleep let me get the numbers backwards.

I hate that my body is programmed from years of routine to wake up at 6 no matter if I go to bed at 10pm, 1am, or like last night around 3:30. I haven’t even had to use an alarm in years, I set it each night but always turn it off a minute or two before it goes off except on weekends when I’d enjoy sleeping in… just can’t convince the old body to do it. Time changes messes my internal clock up for a day maybe two, but it adjusts rather quickly as well. Oh well… I’m sleep deprived rambling on now…

Thanks for the correction Swine

I can relate. I did 7 pm-7 am for a long time. Sometimes in January I never saw the sun for weeks.

I’m programmed too. Wake up every 90 minutes or so.

There was one summer while living in Fort Smith that I had to be at Danville. We were building a country club / gold course for the Jones’. Had to be there by 7am and was working 12s. I could not swear the sun was ever rising in Fort Smith during that time as I never saw it to confirm it. It was just a rumor I heard about but never saw. Like the great white buffalo or bigfoot.

Technically is there any such thing as a single “division”?

Technically is there any such thing as a single “division”?